A few years ago I heard an elderly woman make this poignant statement: "Seems like this country has been at war my entire life. I was born during World War I, got married during World War II, my son went to Vietnam, my grandson and granddaughter went to Iraq...and we'll probably still be at war when I die." She was right. The country was still at war when she died last year.

I wonder if today's kids have a similar sense that they are living during wartime. Is it an immediate concern or just something they flip past when changing channels on the TV? That's pretty much what Vietnam was for me, growing up in the late 1960s -- a distant conflict that had little to do with our everyday lives. I was young, naive, and more interested in reading books than following current events.

It wasn't always this way, I know. Back in the 1940s, World War II seemed to affect every aspect of life -- up to and including children's books. If you had a copy of Alice Dalgliesh's 1944 novel THE SILVER PENCIL, 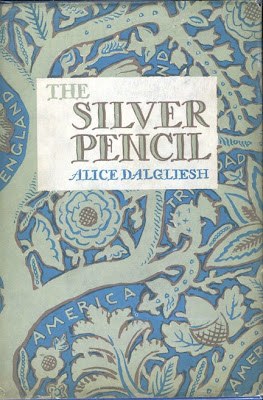 you would have seen this notice on the copyright page: 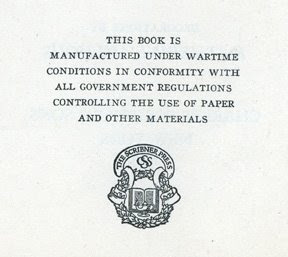 .
That same message appeared on hundreds of other books published during the World War.

Last night I was looking at a copy of FOG MAGIC, a 1944 Newbery Honor Book by Julia Sauer 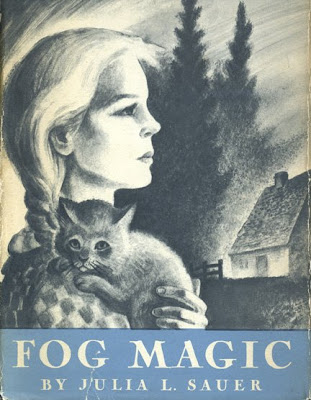 and noticed this statement on the front flap of the dustjacket

which I really admired because it not only explained the publishers' wartime responsibilty, but also promised the reader that their enjoyment of the book would not be compromised. And smart kids probably figured out that the phrase "there is more here than meets the eye" would apply to nearly every book they'd ever pick up and read. 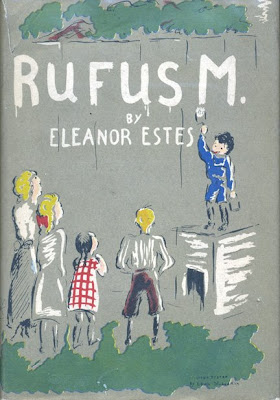 does not contain the usual book description or author biography on the back flap of the dust jacket. Instead, it features an advertisement urging readers to buy war bonds.

I can't say enough good things about Eleanor Estes' series THE MOFFATS (1941), THE MIDDLE MOFFAT (1942), and RUFUS M. (1943.) (A fourth volume, THE MOFFAT MUSEUM, was published decades later in 1983.) Distinguished by their keen understanding of children's thoughts and emotions, their funny-yet-touching plots, and their warm depiction of family life, the books should also be recognized for the comfort and support they gave child readers during World War II. Though no specific dates are given, the Moffat children are growing up during World War I. Schoolkids march to the train station with flags and flowers to see the soldiers off for camp. Rufus and his classmates knit washcloths for the "sojers" overseas. His teacher displays a flag with four blue stars -- "one for each of her four soldier brothers." At home the Moffats face rationing, squeezing food coloring into margarine to make it look like butter, then having to decide whether to thinly spread their allotment over several slices of bread or have one slice of bread with a really good thick layer of margarine. All these events mirrored the experiences of children reading the books during World War II, and the final chapter of RUFUS M., "Better Times are Coming Now," in which armistice is declared, must have been particularly comforting to children reading the book in 1943 -- two years before their own war would end.

From a collecting perspective, notices of wartime printing regulations and ads for war bonds help identify when a book was published. More than that, they place a book in historical context. I love finding them in old books I encounter, as they take me to another place and time in American history. They also remind us that our country eventually made it through that war and somehow we'll keep doing it.
Posted by Peter D. Sieruta at 10:31 AM