Seeing Myself in Print

Someone recently told me they'd learned to knit by borrowing a "how to" book from the library and following the instructions.

I was amazed and impressed.

I've spent a lifetime borrowing "how to" books from the library with very limited success.

First there was the origami book. I mastered the paper crane immediately. Of course that was only on page one. I never did figure out how to fold the jackrabbit on page two...much less the Eiffel Tower on pages 160-161 or the complete "Twelve Days of Christmas" display shown on pages 180-219.

Next came the ventriloquism book that averred anyone could "throw their voice" across a room, up or down the stairs, or into a closed jar. Oh how I practiced ("Let me out! Let me out! I'm over here, trapped in the pickle jar!") It didn't work.

The most important "how to" book from my youth was SEE YOURSELF IN PRINT : A HANDBOOK FOR YOUNG WRITERS by Nan Gilbert. I didn't know it then, but "Nan Gilbert" was a pseudonym for Mildred Gilbertson, who also wrote some of the books in the "Tuckers" series (see blog entry from March 25) under the name Jo Mendel. And SEE YOURSELF IN PRINT was illustrated by Jacqueline Tomes, who did the Tuckers' art as "Jackie Tomes." 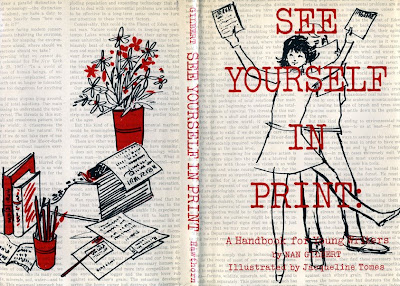 I checked this book out of my elementary school library over and over, would have checked it out of the junior high library too if the librarian hadn't been so mean (the only librarian I've ever encountered who DIDN'T want her books to circulate), and borrowed it from the public library so often that it was practically on "permanent loan" in my bedroom at home.

SEE YOURSELF IN PRINT offered some time-honored tips for young writers ("If you want to write well, then read, read, READ -- and write, write, WRITE.") and actually gave some pretty good advice on deciding what to write about, how to present the material, and where to market it. This how-to book didn't promise miracles, but its hopeful tone, emphasized by capital letters ("What's STOPPING You?"), suggestions of long-term success ("Later, when you are selling regularly...you can approach an agent legitimately and confidently") and killer last line ("Good luck. I'll be seeing you -- in print") had me ready to drop out of grade school and hang out my shingle as a freelance writer.

Thank goodness I didn't. Even though I followed every bit of Gilbert's advice, submitting manuscripts with "pleasantly wide" margins and industriously keeping an index card file (noting name of piece, wordage, date completed, market list, date sent, date returned, etc.), I never sold a thing. I couldn't figure it out. I attempted what Gilbert called "tiny tot" stories (the book assured us that this was the standard term editors all across the industry used for little kids. I doubt it, and it makes me cringe to think I ever submitted stories to the "Tiny Tot Story Editor" at this or that magazine) and I modeled my own efforts off the published stories Gilbert included in the book (her stories always featured characters with unlikely names such as "Jock" and "Bing") but still I never got anything published. I couldn't put my finger on it, but SOMEthing was missing. (Oh yeah...talent.)

Another twenty years passed before I ever "saw myself in print" and I don't know whether that was coincidental -- or whether Gilbert's book really worked. Maybe SEE YOURSELF IN PRINT is like one of those slow-release medications that you take today and then start working a couple months (or DECADES!) later.

I do know the book meant a lot to me as a kid and I still recall it very fondly. Besides M.E. Kerr's inspiring BLOOD ON THE FOREHEAD : WHAT I KNOW ABOUT WRITING, I can't think of too many recent writing guides for young people. I do know that SEE YOURSELF IN PRINT sure wouldn't cut it today. The cover illustration is unbelievably dated. (Kids, see that machine on the back cover? It's what we used to call a typewriter. Yeah, kind of like a computer but without a screen or lights or Youtube. It did have a bell on it, but only to remind you to take your right hand off the keys and slam a lever on the side of the machine.) Beyond that cosmetic difference, the entire world of publishing has changed since the book was released in 1968. The dozens of "slick, glossy" magazines for teens that Gilbert cites are no longer published, much less the multitude of Sunday School weeklies she calls the "ideal place to get a toehold in the exciting world of publication." Reportedly many now-famous authors (such as Lois Duncan and, I believe, Phyllis Reynolds Naylor) got their start in that world...but there just doesn't seem to be a place for aspiring writers to get that "toehold" today.

Then I think...oh, yeah...maybe there is a place kids can express their thoughts these days and even "see themselves in print...."

It's called blogging.
Posted by Peter D. Sieruta at 1:57 PM

Thank you for reading it.