For people who share the same DNA and grew up in the same house, my brother and I couldn't be more different -- especially when it comes to books and reading.

When we were very young, our mother used to read aloud to us. If, at some point, I needed a bathroom break, I'd ask her to stop and demand "Don't read anymore till I get back!" Halfway down the hall, I'd turn around, worried that I would somehow miss the story, and remind her: "Don't start again without me!"

My brother, on the other hand, would get up and say, "I'll be right back. You can keep reading without me" and wander off to the bathroom, then into the kitchen for a snack, stop to look out the window, then into his bedroom to play with his Lite-Brite set, and listen to a record, all the while occasionally yelling back, "Keep reading. I can still hear you!"

Of course he actually couldn't hear her -- which was the whole point. He'd rather wander the house, stare out the window, play with his toys, or listen to records than find out how Pooh was going to get unstuck from Rabbit's doorway.

And so it's gone on through the decades. If you were to ask me today what my favorite book is, I'd say, "Oh...let me think about it...there's so many to choose from!" Ask my brother his favorite book and he'll immediately tell you, "Archie's Pals 'n Gals, July 1969 issue."

Still, for all our differences, we usually come through for each other when times are tough.

Take, for example, the time that Robert Cormier came to town.

He was scheduled to appear at the Birmingham Bookstore -- a snooty store in a snooty suburb. Robert Cormier, whose brilliant and controversial novels had changed the landscape of young-adult fiction, was one of my personal heroes -- but his bookstore appearance was scheduled for a weekday afternoon and I had just begun my first full-time job and couldn't possibly get the day off work.

Happily, my brother volunteered to take my books to the store and have them signed. Wasn't that nice of him? (He also said it would cost me $5.)

The big day arrived. I advised my brother to get there extra early because "Robert Cormier is a VERY famous author and I'm sure the booksigning will be very crowded!"

My brother arrived early, but he was the only one there. When he walked into the store with a couple Cormier books in his hand, the store manager was so relieved she almost hugged him. "Now Mr. Cormier isn't here just yet, but if you just wait patiently, he should be here very soon. Till then, why don't you just browse for a few minutes."

Browsing in a bookstore. Yeah, my brother was going to LOVE that.

Soon there was a small fuss at the back of the store and the manager came running over to my brother. "He's here! He's here! We're serving him a light lunch in the backroom, but then Mr. Cormier will be right out to sign your books!" She dragged my brother to a chair at the back of the store and pushed him into it: "Now you just sit HERE and think of all the questions you'd like to ask Mr. Cormier."

Of course my brother, who had never picked up a Cormier book in his life before I'd handed him my copies that morning, didn't have any questions at all to ask the author. Except maybe, "How was your light lunch?"

A word should be said about Robert Cormier here. A former journalist, he had published several adult novels before entering the young-adult field in 1974 with THE CHOCOLATE WAR, an explosive look at tyranny and individualism played out within the closed society of a Catholic boys' school. With his next two YA books, the mysterious and complex I AM THE CHEESE (1977) and his unflinching study of terrorism, AFTER THE FIRST DEATH (1979), Cormier sealed his reputation as one of the most important writers young adult fiction had ever produced. He was also known as one of the nicest men in the literary world and took special delight in meeting his readers. He even gave his own phone number to a character in I AM THE CHEESE and, for many years, fielded calls from teenage readers asking to speak to the fictional character of Amy Hertz. With this kind of literary reputation, it was shocking -- and downright shameful -- that only one person had turned out for his signing session at the bookstore. It also explains why the bookstore manager was in such a state that day, grabbing my brother and forcing him into a chair. Soon she was dragging Mr. Cormier from the backroom as well, telling him to come and meet his "biggest fan"! 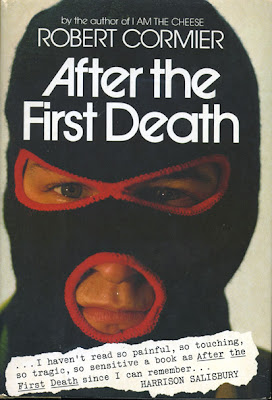 "Right this way, right this way," she babbled to the famous author and then pushed HIM into a chair facing my brother. Robert Cormier smiled and shook my brother's hand. The bookstore manager came around behind my brother and put her hands on his shoulders. "This young man has been waiting to meet you for over an hour. I think he must be your biggest fan in the world! Tell Mr. Cormier how much you like his books," she said, squeezing her fingers into his shoulders and getting more and more desperate with each word: "Tell him which one you like the best. Go on: Tell him!"

Mr. Cormier looked at my brother quizzically and my brother responded, "Actually...actually...I've never read any of them."

Later on I asked him, "Do you know how embarrassing that must have been for Mr. Cormier? Can you IMAGINE how he must have felt? Why didn't you just lie! Why didn't you say they were all so great you couldn't choose a favorite?"

"I couldn't think with that old lady squeezing my shoulders like that," he said. "Besides, what if he started asking me questions about the books? Like who my favorite characters were or what my favorite scenes were?"

"Well, that's a good point," I conceded, "but I still feel bad that the only person who showed up for the entire booksigning was one non-reader."

"At least you got your books signed," said my brother. True. After telling Mr. Cormier that the books were for someone else who actually DID read his books, the author nicely inscribed them. And I love that he signed them "Bob," just like we were good friends. In fact, if anyone should happen to see this book on my shelf, I'd probably just let them go ahead and think that my great good friend "Bob Cormier" had signed it for me -- never admitting that he signed it by proxy and got humiliated in the process.

No wonder I never came through on the $5 I promised my brother.
Posted by Peter D. Sieruta at 9:27 AM

I love this story! I was a big fan of Cormier as a teen.

What a great story! I laughed out loud as I read it. What a special memory for you and your faithful brother to share. But I still think you owe him $5 for going out of his for you!