Dorothy and Sid : They Really Got Around

Two days ago I blogged about the 1964 Newbery Medal winner IT'S LIKE THIS, CAT by Emily Cheney Neville. 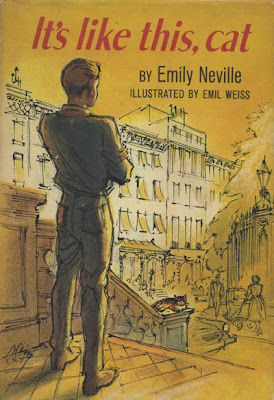 Yesterday I wrote about a personal inscription to Dorothy and Sidney Fields that I found in Crescent Dragonwagon's THE YEAR IT RAINED.

Today I'll connect these two threads by showing you the author inscription in my copy of IT'S LIKE THIS CAT:
\ Yes, it looks like the very same Dorothy and Sidney Fields also had something to do with the writing of Emily Cheney's novel!

So far the only thing I've turned up is that Ms. Cheney worked as a reporter for the NEW YORK MIRROR in the early forties, then took time off to raise a family. She began writing fiction in 1961. In an autobiographical essay, she relates, "Fooling around one day on a cranky old typewriter with sticking keys and no return lever, I started being a boy arguing with his father...." The resulting story, "Cat and I," was published on a single page in the Sunday edition of Neville's old newspaper, the NEW YORK MIRROR. She would later expand this story into the full-length novel IT'S LIKE THIS, CAT.

Looking on Google, I've learned that Sidney Fields worked as a reporter and columnist for the NEW YORK MIRROR.

So it's pretty likely that Neville and Fields were colleagues at the same paper.

Regarding the inscription, Chapter 11 is called "Rosh Hashanah at the Fulton Fish Market," and describes how Dave gets the day off school for the Jewish New Year and, along with a pal, takes the Avenue C bus to the end of the line where they have lunch at an Italian restaurant (spaghetti and meatballs, seventy-five cents) and then visit the Fulton Market. Whether Sid advised Neville on the Jewish holiday, New York bus routes, Italian food, or the Fulton Fish Market is a question that may never be answered.

Incidentally, I bought the Fields' inscribed copy of THE YEAR IT RAINED at a bookstore in the New York suburb where they lived...but the inscribed copy of IT'S LIKE THIS, CAT came from an entirely different state! How did it end up there? Again, we'll probably never know.

The only thing I do know is that Dorothy and Sid must have been pretty special people to inspire such wonderful inscriptions from their author-friends.
Posted by Peter D. Sieruta at 12:15 PM

Wow this is a really fun story. Thanks so much for sharing it. I am eager to know if there are more Dorothy and Sid books out there.