But oh such beautiful chickens! Welcome to Sunday brunch at Collecting Children's Books. On the menu: random facts, opinions, and anecdotes about Easter books.

There are thousands of children’s books about Christmas, but I can think of very few that focus primarily on Easter -- and most of those

are picture books, such as THE EASTER BUNNY THAT OVERSLEPT by Priscilla and Otto Friedrich (illustrated by Adrienne Adams) and THE BUNNY WHO FOUND EASTER by Charlotte Zolotow (illustrated by Betty Peterson.) When it comes to fiction for older readers, I can only come up with a handful. A DREAM FOR ADDIE by Gail Rock takes place during the Easter season. Ursula Dubosarsky’s recent inscrutable novel THE RED SHOE (“Inscrutable” : a fancy way of saying “I didn’t get it.”) is set during Easter week 1954. Jane Yolen’s masterwork THE DEVIL’S ARITHMETIC begins on Easter, but quickly segues to a Passover seder. I vaguely remember reading a Sheri Cooper Sinykin novel set during Easter vacation (possibly A MATTER OF TIME?) and didn’t one of Carolyn Haywood’s “Eddie” books have the young protagonist find a nest of bunnies inside an old Easter basket half-buried in the garden? But after that, I’m hard-pressed to recall any others. Can anyone think of any more children’s and young adult novels with an Easter theme?

If you collect holiday books, here’s a tip. Try to hunt for them about six months in advance of the big day. There’s a Christmas book I’ve been trying to get (THE CAROLERS by Georgia Guback) for ages, but the only time I think about it is when the Christmas season rolls around...which, of course, is exactly the same time everyone else thinks of this book and is trying to get it -- making it impossible to find. For sheer availability, and the lowest prices, I should be searching for this one in mid-July, when people are jumping in pools, not decking the halls. The same is true for Easter books. Don’t search eBay or any other online source in March and April. Wait till about October and you won’t have any competition bidding on those books.

Nowadays when I go to the library, I see signs for all kinds of kid-friendly events: book clubs, library sleepovers, movies, and career counseling. Even though I practically lived at the library when I was growing up, I don’t recall any special events geared for young people back then. Everything was aimed at adults: tax preparation lessons, knitting groups, lectures on building a stock portfolio. The only time I recall attending a special library event was one damp spring evening when a lady demonstrated how to make Ukrainian Easter eggs or, as she called them, “pysanky.” She finished up her presentation by selling all the supplies you’d need to make your own “pysanky” at home. Because I lived too far away to run home, get money, and return to the library before they closed, I instead ran to the pay phone in the lobby (“pay phones” -- something we used to make telephone calls with before cellphones were invented) and called my mother, begging her to bring the piggy bank from my windowsill (it wasn’t actually a pig; it was shaped like a rat) up to the library ASAP. When she drove up fifteen minutes later, I pulled the rubber stopper from the bottom of my rat bank and fished out as many dollars bills and quarters as I could, then ran back into the library to buy packs of dye, cubes of beeswax, and a couple styluses.

For the next several weeks my brother and I sat hunched over a card table in the living room, using candles to melt beeswax in our styluses, then sketching designs onto eggs. It was a painstaking process, applying multiple layers of wax, submerging the eggs in progressively darker dyes, and finally melting all the wax off the egg with a candle to reveal the brilliant artwork underneath. Well, my brother’s artwork was brilliant. A regular Van Gogh with a stylus, his finely-detailed eggs looked like something you’d see in a magazine. Having neither the talent nor the patience for “pysanky” (heck, I couldn't even pronounce the stupid word!) my eggs featured one or two lumpy stripes (as opposed to my brother’s zillions of stripes and checks and squiggles) and usually came out all muddy brown (as opposed to my brother’s jillions of sky blues and hot pinks and butter yellows and aqua greens.) Plus, mine always smelled bad and had black scorch marks because I invariably burnt the eggs trying to melt the wax off.

How well I remember giving our Ukrainian eggs to all our aunts that Easter:

Brother: Here’s an egg I made for you!

Aunt (cradling egg gently in her hands): This is just beautiful! I’m going to put it in my china cabinet and display it forever.

Peter: And here’s mine.

Aunt: Ah...well...I think I’ll just poach this one up for breakfast in the morning!

Sad, sad, sad. But remember when I said our library didn’t hold events like career counseling? Now I think the pysanky demo was just some form of career counseling in disguise. Look how we ended up. Seven or eight years later, my brother was going to art school and I was making Egg McMuffins at McDonald’s. (I scorched those, too.) 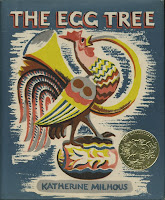 I can only think of one Easter picture book that won the Caldecot: 1951’s winner, THE EGG TREE by Katherine Milhous. I wonder if any kids today are inspired by this Pennsylvania-Dutch themed book to create their own Easter egg trees? I imagine that at some point in the past this might have been a school project, but in these more secular times, probably not.

AND I WONDER IF THEY ARE STILL DOING THIS?

Back in the late 1950s and early 1960s, Wilma Pitchford Hays wrote a series of short historical novels all centered on holidays. EASTER FIRES concerns 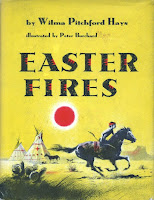 a peace treaty between Texas colonists and Native Americans that was celebrated by building bonfires. Hayes ends her introduction with “For more than a hundred years bonfires have blazed each Easter Eve on the hilltops about Frederickburg, Texas. Fires will burn this Easter and for many years to come.” I have never heard of this tradition. EASTER FIRES was published in 1959; I’d be curious if this tradition has continued into the twenty-first century.

RELIGIOUS INSTRUCTION FROM A NEWBERY WINNER

Another Easter book in my collection was written by Elizabeth Yates, who won the Newbery for AMOS FORTUNE, FREE MAN. In AN EASTER STORY

she uses a flimsy fictional narrative -- a series of Easter week conversations between Debra and her older, wiser cousin Con -- to explore the meaning of the holiday. The book has some nice moments, but the erudite Con is clearly a mouthpiece for the author, as she casually tosses off paragraph after paragraph of religious instruction. Published by Dutton in 1967, I can’t imagine a mainstream publisher releasing such a book today; now it would probably only be published by a small religious press.

URSULA AND THE RABBIT

The most famous children’s book editor of all time, Ursula Nordstrom, would probably not have published Yates’ EASTER STORY. But she did publish Margaret Wise Brown’s THE RUNAWAY BUNNY, as well as hundreds of other important and influential works. On one occasion she was served rabbit stew at a business dinner, but pushed the plate away, commenting, “I’m sorry but I can’t eat this. I publish rabbits.”

There has been a long tradition of rabbit protagonists in children’ books. Who can forget Peter Rabbit, THE RUNAWAY BUNNY, and the lapine heroes of Robert Lawson’s RABBIT HILL and THE TOUGH WINTER? Then there’s PAT, THE BUNNY (I’m joking, I’m joking.) Here’s a lesser-known rabbit that needs rediscovery -- GILDAEN : THE HEROIC ADVENTURES OF A MOST UNUSUAL RABBIT by Emlie Buchwald. I remember reading this novel in the early 1970s and liking it a lot. In fact, I think I’ll try to track down a copy soon.

EGGING EACH OTHER ON

One problem with introducing a book like GILDAEN, then saying something like “I think I’ll try to track down a copy soon” is that someone reading this blog may now decide THEY want to read the book too -- and track down the very last copy of GILDAEN before I can get my hands on it. My response? “Oh well, I’ll just keep searching.” I love the idea that my enthusiasm for an old book may lead others to discover it too. I would never have known about some of my favorite books and authors if someone else hadn’t recommended them to me at some point. Or perhaps I DID know about them, but didn’t really appreciate them until I heard a fellow reader or fan extol their virtues. For example, someone recently told me how much they loved the work of Kurt Wiese. I hadn’t thought much about Wiese before, but the more I heard about his work, and the more I looked at his books, the more I began to appreciate him too. Now I’m a fan -- and competition for anyone else seeking his books. But that’s what us book collectors do: we egg each other on. And for now, let me join Kurt Wiese in wishing all: 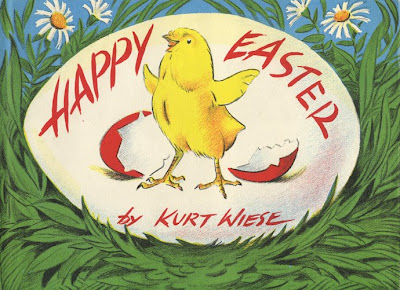 Hmmm...I think an argument could be made for Speare's THE BRONZE BOW as the ultimate Easter book?

Anonymous: I've never even read THE COUNTRY BUNNY...but now that you've told me about it, I'll definitely be tracking down a copy!

lsparkreader: Hmm...I never thought of THE BRONZE BOW as an Easter book, but you have a point. It's probably one of my top-five Newbery Medal winners of all time -- a truly brilliant novel!

Happy Easter to both of you -- and thanks for visiting my blog.

Definitely add THE COUNTRY BUNNY to your list. Also I suggest MAX'S CHOCOLATE CHICKEN by Rosemary Wells and CHICKEN SUNDAY by Patricia Polacco.

I agree that The Country Bunny is the best of the lot. And I am thrilled you remembered the Gail Rock book. Tomie dePaola did a board book called My First Easter, which was terrific and then of course Dav Pilkey's Dumb Bunnies celebrate Easter with a decorated tree and stocking at the chimney.
The decorated eggs on your table are gorgeous.
My favorite part of Easter these days is the half price jellybeans on Monday.
Thanks for the Brunch post.