Welcome to another Sunday brunch at Collecting Children's Books, featuring random facts and opinions on children's and young adult books. No omelets or poached eggs are available on today's buffet. After eating Easter-egg-salad sandwiches for an entire week, I don't want to see another egg till next spring.

Did anyone "go green" by turning off the lights last night from 8:00 to 9:00 PM? My brother said it was highly publicized in Chicago and he joined in the effort. I didn't hear word about it here and -- as far as I could see -- all lights remained blazing in these parts. I was reminded of this long ago picture book by Don Freeman: 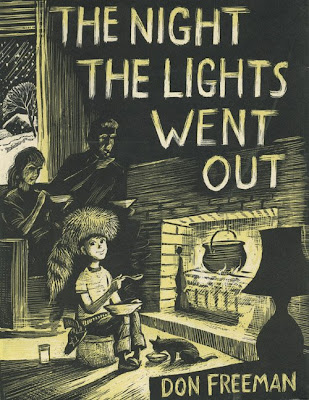 The little boy in the coonskin cap is called Thacher in the book. But did you know he was also called Thacher in real life? Yes, this story is based on an actual electrical outage experienced by Freeman's author/illustrator friends Edith and Clement Hurd. The star of the book, young Thacher Hurd, grew up to became a famous children's book creator in his own right, perhaps best known for the award-winning picture book MAMA DON'T ALLOW.

I always get a kick of discovering inside jokes in books. Yesterday I was reading Steve Kluger's new young adult work MY MOST EXCELLENT YEAR : A NOVEL OF LOVE, MARY POPPINS & FENWAY PARK and enjoying the scenes in which the characters prepare to put on a talent show. This is the kind of fun book that's not written as a straight narrative but is instead composed of letters, baseball scorecards, signs, IMs, and other ephemera. When I got to the point where the program for the "Freshman Follies" was printed, I recognized the book's editor was listed as one of the kids performing in the pageant. (Her vocal selection? "So Unsexy.") Catching that made me feel like a real "insider!" Now I'm wondering if the other "kids" named in the Follies program are also real.

This makes me wonder how many other "real live people" get their names inserted in their friend's books. I remember Paul Zindel once wrote that his favorite part of his (brilliant, groundbreaking) novel THE PIGMAN was the big party scene because he got to include the names of his real-life friends (as well as some enemies) among the list of partygoers at John and Lorraine's big bash.

Beverly Cleary didn't name the title character of her Newbery winning DEAR MR. HENSHAW after a real live person. She found the name in the newspaper obituaries!

A STITCH IN TIME

A few weeks ago, my cousin in Macon, Georgia alerted me to a new children's book. She owns a sewing center and this book arrived as part of her standing order from a publisher of craft and quilting books, Martingale & Company. Because it was unusual for this company to issue a work of fiction, she was drawn to read THE TALE OF ALICE'S QUILT by Jennifer Blomgren, really enjoyed it, and arranged to get me a copy. (Thank you!) I enjoyed the book as well. I've always liked books that show a character learning a new hobby or job. Perhaps this is the reason TV shows like DANCING WITH THE STARS and TOP CHEF are so popular: it's fascinating to see the creative process unfold as someone learns to make something -- whether a dance, a meal, or, in this case, a quilt -- come to life. THE TALE OF ALICE'S QUILT is about a young girl who discovers some antique quilting pieces in an old trunk, learns they were made by a long-deceased great aunt, and determines to finish the quilt herself. Although I thought the story lacked the immediacy of many children's books, it's quite readable and often touching. Admittedly, I'm probably not the key audience for this volume. However, I gave it to my mother to read and she reported that "tears streamed down my face the whole time I was reading it." Sounds like the perfect Mother's Day gift for those who start their shopping early. I also want to say I think it's a great idea for "niche publishers" to include children's books among their offerings. Kids who discover this book (which includes instructions for making a quilt) today may grow up to become tomorrow's crafters and quilters. 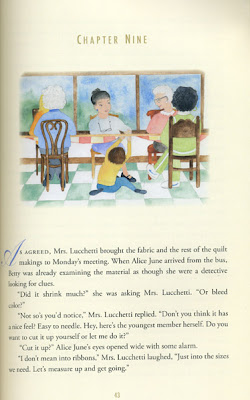 Another nice things about THE TALE OF ALICE'S QUILT is that it contains illustrations -- something that almost no middle-grade novel does anymore. Color ones yet! I miss the old days of illustrated intermediate novels and wonder if they disappeared because kids thought illustrated chapter-books were "babyish" or if it was just a way of saving money for the publishers?

SOMETIMES YOU DON'T EVEN NEED PICTURES

When Patrica MacLachlan's incandescent short novel SARAH, PLAIN AND TALL was published many people commented on how perfectly the illustrations matched the text. There was only one problem: the book was not illustrated. But MacLachlan had created such a perfect text that many readers were able to visualize the story as they read it and later "remembered" seeing the illustrations. Now THAT'S great writing!

THOUGH SOMETIMES PICTURES ARE NICE....

I'm noticing a new trend in ARCs (advance reader's copies) these days. For many years they were issued to the book review market with bland cardstock covers. Over the past fifteen years or so, most have developed a sharper image, with color covers that depict the eventual dustjacket. Now I'm seeing unillustrated covers once again: 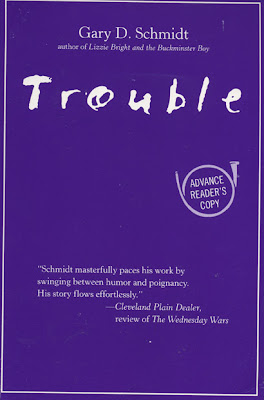 I don't know if this is a cost-saving measure for the publisher or just a way to quell the fast-growing ARC market. Many collectors love to get our hands on ARCs, but maybe this is a way of making them a little less appealing and desirable to less-serious collectors. But SERIOUS collectors (like me!) don't really care what the exteriors look like; we're more concerned about what's inside.

I see that Margaret Peterson Haddix has a new series beginning next month. The first volume is called THE MISSING: FOUND. I won't reveal what I've read in reviews; half the fun of reading Haddix's books is watching her amazingly inventive plots unfold. I don't think there's another writer out there right now who consistently comes up with these types of fantastic, mind-bending plots in book after book. What an imagination! And the best part is, kids love her novels! I've already got my copy pre-ordered.
Posted by Peter D. Sieruta at 2:14 PM

I loved the way you incorporated the reality TV shows with The Tale of Alice's quilt. I'm not sure of the reason but I'm seeing a much younger interest in sewing these days,maybe Project Runway?
I'm not certain but I'm not exactly sure that "Alice" was intended as a "children's or YA book although Jennifer has written two sweet children's books: Where Do I Sleep? and Where Would I Be in an Evergreen Tree? which are written for 3-6 Year olds with beautiful illustrations that will encourage conversations with your youngster.
The great aunt Alice Patricia who made the quilt blocks in the story is based on true events. Another example of an author using a real life person including real names. The author of "Alice" is also the illustrator. Doesn't the pose of young Alice June sitting under the quilt frame make old bones ache?
As always I love your blog and anxiously await each new post.
Marilyn

The Feiwel and Friends covers are the ones I've been most interested in. They're plain for the most part but also replicate a written selection from the book that will sound interesting to a casual reader. Clever things.