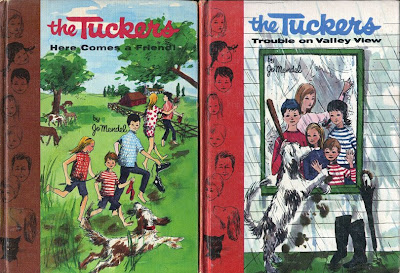 Every reader, no matter how serious, probably has a few "guilty pleasures" tucked away on a back shelf. Imagine picking up a first edition of ULYSSES and finding a copy of Nancy Drew's THE CLUE OF THE TAPPING HEELS wedged behind it. Or sliding a vellum edition of PILGRIM'S PROGRESS off the shelf only to have Judy Blume's BLUBBER tumble out after it.

Pictured above are two of my guilty pleasures: volumes in "The Tuckers" series, written by "Jo Mendel" and published by Whitman in the early 1960s. Woolworth's used to sell them for a dollar -- smack in the middle of the toy section. I have no idea where I got the dollar to buy the first one. I just remember walking to Woolworth's on the last day of school and gripping that dollar in my fist until it got damp as I tried to decide which one of the books on display I should select. The design was uniform, but each had a different colored spine: brown, red, blue, yellow, etc. I think I was drawn to HERE COMES A FRIEND! because it featured the Tucker kids running barefoot across a field -- perfect symbolism for summer vacation, which had just begun that afternoon for me. And months later I bought TROUBLE ON VALLEY VIEW on a rainy morning that similarly matched the illustration on the cover of the book. I never bought another one. They were already several years old when I purchased the first two, and I think Woolworth's soon thereafter replaced The Tuckers with the kind of cheesy TV tie-in books that Whitman was infamous for publishing.

But I must admit I read these first two volumes over and over and over, drawn into the drama and fun of the happy Tucker family -- emotional big sister Tina, nine-year-old twins Terry (typical boy) and Merry (typical girl), family cypher Penny, and preschooler Tom who is always described as having a "deep, sober, older-than-five voice," or "a voice as deep as a well." There was just something so...well...PERFECT...about this family. They got to motor their own boat ("The Tub") across the lake by themselves. 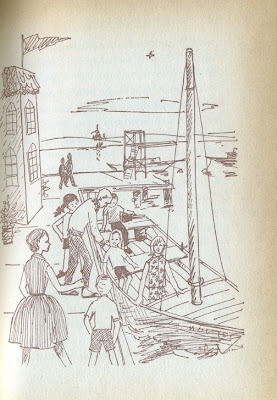 When they got in fights, they didn't hold grudges for days or generations. Instead: "'Kiss and make up' was a rule in the Tucker house, carried out in a gay ceremony which took the sting out of being at fault." When their cat gets injured, Penny even dons a nursing outfit to take care of it. 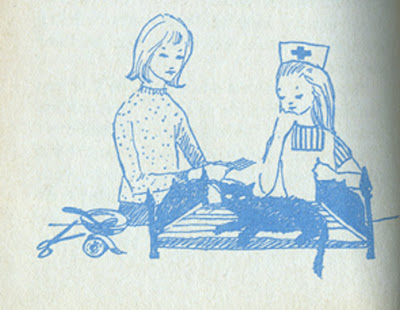 How perfect is THAT?

Of course as an adult I can see the flaws in the books. Nearly every page contains a cringe-worthy line or phrase ("Gay banter was tossed from father to son and back again, revealing their gladness to see each other.") Fans of "Tom Swifties" could have a field day counting how many times the Tuckers smile valiently, shout gladly, and murmur prayerfully.

But it's too easy to make fun of the books as an adult. The truth is: they impacted me greatly as an eight- or nine-year-old kid. I still remember Terry and Tom (of the "deep grandfather voice") digging and diving into a cave full of mud on a Sunday morning. I still recall Tina's concern that her family wouldn't measure up to a wealthy neighbor and the emotional "rightness" of the moment when she banged her head and was glad because it gave her the opportunity to squeeze out a few tears she'd been holding back all day.

I also have to say that Whitman did a better-than-average job producing the books. Every volume had a color scheme and the sketchy illustrations (by Jackie Tomes...any relation to Margot?) are printed in a single color (brown in HERE COMES A FRIEND!, blue in in TROUBLE ON VALLEY VIEW.) Because the perspective shifts from Tucker to Tucker within each book, each chapter is headed by a sketch of that chapter's star. And the endpapers are downright Penderwickian: 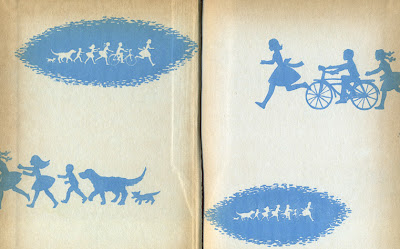 At the top of this blog entry, I referred to The Tuckers as guilty pleasures. I probably shouldn't feel guilty. Despite the flaws in the writing, despite the near-perfection of the Tucker kids, these books obviously still have a great hold over me. I still have my original two volumes, though the pages are turning brown around the edges like autumn leaves. And I'm still talking and thinking and blogging about them nearly forty years after I selected them from the Woolworth's rack.

A bit of background:

Writing under the pseudonym "Jo Mendel," most of the books in the Tuckers series were written by Gladys Baker Bond, who is apparently still alive at age 95, and Mildred Gilbertson (aka Nan Gilbert) who lived from 1908-1988.

This is the complete series of novels:

I cannot find a reference to who wrote the first book, and both Bond and Gilbertson claim credit for THE COTTAGE HOLIDAY in reference books. After the initial eight volumes were published, there were apparently a handful of picture book length Tucker stories published in the "Whitman Big Tell-a-Tale" series.
Posted by Peter D. Sieruta at 2:02 PM

I found your blog via Semi-colon and I'm reading every post. I'll comment here (since no one else did) and tell you how much I loved The Tuckers as a child. Especially Penny - she as my favourite. Although Merry and Tom were close seconds. The Cottage Holiday was my favourite. I also adored the Betsy-Tacy series. I can't believe you gave them away - until I saw your name - of course the only reason you could give them away - you're a boy. :)

I love your blog. I love children's books. I'm a recently retired teacher-librarian who bought the whole Betsy-Tacy series for her library.

I had almost all of these books and I loved them. I liked Tina the best because she was an older sister, like me. My favorite volume was The Turn-About Summer. Father takes Mother on a vacation without the children. They hire an older woman to sit for them, and she does just that. Sit. As a result, by the end of the summer, the Tucker kids are much more independent when Mother comes back well-rested.

I'd forgotten that they used to stick those Whitman books right in the toy section.

The Cottage Holiday is my favorite as well. Penny has a definite character in that book, instead of being just a little girl that plays with dolls. I read it every year at Christmas. Both the Penny-centric volumes (the other being That Kitten Again!) seem different from the others; always wondered if they were written by someone else.

(PS I used to get all my Tucker books--as well as the Whitman TV tie-ins--at Newberry's, again in the toy department. I think WT Grant carried them, too.)

Good day, my group is simply establishing our first web site, looking and working out what is needed. This weblog caught out proper away. I¡¯m fired up about this, and adore the design of your site. Can you let me know what ¡°theme¡± it's?

I found your site while googling info about the Tucker book series. I loved those books! Thanks for all your work finding information and putting it together. I remember many summer days spent sitting in the yard, reading those books.

I am Gladys Baker Bond's great nephew. Aunt Gladys passed away in 1985. She had a huge impact on my life and today I am the proud owner of a bookstore.

Thank you to all for your kind words