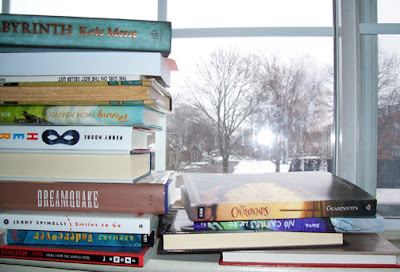 From where I sit right now, I can see fifteen books on my bedroom window sill.

Just below that are forty-three books (forty-three? Yes, I just counted 'em!) on my bed, extending from the pillow at the top to the folded afghan at the bottom.

I can't see the other side of the bed from here, but it's just as well. Several dozen books dwell over there. Plus there are a few full bags and boxes behind me.

What do all these books have in common?

I haven't read them yet!

One of my biggest regrets in life is that I'm just not a very fast reader. I don't think I'm a slow reader by any means. I don't follow the words on the page with my index finger and mouth them out one-by-one. In fact, when I attend a subtitled movie I often find myself laughing at the punchlines a few seconds before everyone else. So I'd say that I'm in about the sixtieth or seventieth percentile when it comes to reading quickly, but I'll never be one of those people who's "clocked at a thousand words a minute" or checks WAR AND PEACE out of the library on Monday and returns it Tuesday afternoon.

The summer after we got out of high school, a friend and I went to a free orientation session for an Evelyn Wood Speed Reading Class. I thought this was exactly the kind of training I'd need to start plowing through all the books I wanted to read in my lifetime. The training session was held in a conference room at a bustling suburban office building and I immediately felt like I didn't belong there (THE recurring theme of this blog, it seems.) The only people in attendance were the instructor, me, my friend...and Richard. My friend and I were wearing jeans and t-shirts, but Richard (as he introduced himself) came in wearing a tie and carrying a briefcase. He said he was a busy executive who didn't have time to do the all the reading his job required.

The instructor dimmed the lights and began a slide presentation. He showed a standard page of text and asked how we would read it.

Yes, but why was that inefficient?

Richard raised his hand: "Is it because our eyes have to cover so much of the page in order to read each sentence?"

"Yes!" said the instructor. He then asked if we could think of a better way to view the page.

In a (practiced) tentative voice, Richard ventured, "Would it...would it be easier if, instead of reading left to right, we let our eyes travel down the middle of the page...?"

Richard added, "Maybe using a hand motion like this?" (He then demonstrated, running his index and middle fingers quickly down the page in a back-and-forth underlining motion.)

"Yes, Richard! You've got it already!" said the instructor.

I picked up my free Evelyn Wood pencil and leaned over to write "HE'S A PLANT!" on my friend's information packet.

For the next hour, the instructor and Richard dialogued about why the Evelyn Wood Speed Reading Class was so important for members of our busy society. Books could be read in an hour! Office training manuals could be knocked off during a coffee break! And with no loss of comprehension! In fact, graduates of the class actually reported that they had better reading comprehension than ever.

Finally the instructor mentioned how much the class would cost. I believe it was $360, which was about $350 more than I had to spend. But Richard was already pulling out his checkbook saying, "Sign me up! And if you kids were smart, you'd sign up too!" My friend -- far wealthier than I -- actually did sign up for the class; I left the conference room in humiliation, doomed to a life out-of-step with the demands of modern technology and a future comprised of dead-end jobs and minimal social contacts. (I hate to admit it, but they were right on all counts.) As we pulled out of the parking lot, I saw the instructor and Richard outside by the dumpster sharing a cigarette. I couldn't read their lips, but I suspect Richard was saying, "Next time I'll be the instructor and you be the busy executive."

For the next few weeks, my friend attended the Evelyn Wood class and reported back to me that her reading had improved significantly. She showed me two John Steinbeck books she'd brought to class and boasted that she had read each one in under two hours. Now if these books had been THE GRAPES OF WRATH and EAST OF EDEN, I might have been impressed. But they were THE PEARL and THE RED PONY...each one about a hundred pages. Even a slow reader like me could have read each of those in less than two hours!

It's been about thirty years since then. I'll have to ask my friend if she still practices the techniques she learned in those classes. I am still plugging along, reading books at exactly the same speed I did in high school. I just can't go any faster. When I do, I begin to lose comprehension. Even when I deliberately try to scan (or "flash read," as someone at work calls it) I find that I'm only picking up about fifty per cent of what I'm reading and soon slow down so I can understand it all better. I wish I read faster; I'm jealous of those who do...but at this point I'm pretty much resigned to my own slow-but-steady speed -- even as the books pile up around me. On the windowsill, on the bed, on the floor, everywhere, as I slowly turn another page and mutter every reader's eternal cry:

With that number of still-to-be-read tomes, perhaps you need a paid vacation in a secluded locale...might I suggest a Carribean Island with a pleasant ocean breeze and a hammock strung between two palm trees?

(If it were MY paid vacation, I'd throw a cabana boy into the mix so I'd have someone to bring me cool drinks...)

So much Happy Leisurely Reading lies ahead. It's GOOD to be you!

My sister reads about there times faster than me. We were sitting next to each other on a plane and I was watching here breeze through a book. At first I was mad/jealous that she could read so much faster than me. But then it didn't seem like she was really enjoying the book.

It was in that moment I decided that I read at the perfect pace. I read fast enough that it doesn't take me moths to get through books but slow enough that I can enjoy the experience and find it relaxing. Here blistered pace reading definitely wasn't relaxing to watch so how could it possibly to be to read?

You are not alone in your books piles. I have probably over 2000 books and I have read probably only a tenth of them. But I don't see that as a bad thing. I love being surrounded by books and knowing that I will read a book at just the right time I needed to read it.

Let me second Megan's contribution. There's reading for pleasure, and then there's racing through text to be done with it as quickly as possible. I also sometimes think about how long a writer spent on a story or a novel. The least I can bring to it, it seems to me, is an appreciation for every word and phrase. But this is yet another reason why children's picture books give us adults a nice break: quick reading!

I agree with all three of you.

Megan and P.J.: Since posting this entry several people have reminded me of the pleasure we get from reading slowly and carefully, rather than rushing through a text and perhaps not enjoy it as a much.

And Isdihara: A vacation does sound nice about now!

Thanks to all of you for contributing comments to my blog.

Since the point of reading is - well, reading - why read quickly. I like to read a few lines and then sit and stare off into space and think about what I've read. It's a way of interacting with the book. That's why I find books so much more enjoyable than movies. Watching movies is essentially a passive activity. Reading books is an engagement. There's nothing passive about it.