Let’s see, the clock beside my bed is now an hour behind. The clocks on my computer and VCR, which used to automatically spring ahead when Daylight Saving Time began, didn’t do it this year because DST now has a new schedule. (This also means that sometime in early April, when DST traditionally began, those clocks are going to jump ahead an hour and confuse the “daylights” out of me.) The good news is that my car clock now tells the correct time -- but only because it’s been hour ahead all winter (I never bothered to change it when we “fell back” last fall.) And I’m taking tomorrow off work because I can’t bear getting up at 5:30 AM and knowing it’s “really” 4:30 AM.

Here's a sleep-deprived (and thus probably full of typos) Sunday brunch of eclectic items (random thoughts, facts, and opinions about children’s books.) Hope there is something of interest below.

A librarian recently told me that her library doesn’t provide much moral or financial support for their children’s department -- a common complaint these days. However, I noted that during our conversation, this librarian continually referred to the children’s department as the “juvie section.” Maybe it was a term of endearment for her, but it sounded disparaging to me. Not as bad as the term “kiddy lit” -- that oft-used phrase only a glottal-stop and syllable away from being “kitty litter” -- but it’s still condescending. I think it’s important for those of us who work with children’s books to treat them with respect. If we don’t, no one else will.

EVERYTHING YOU EVER WANTED TO KNOW ABOUT HITTY

which contains photos of the doll that inspired the book and dozens of other links of interest.

I also stumbled across a kit that includes a Hitty doll, as well as fabric and instructions for making her dress. I know nothing about this company, but am just passing along the info in case any future Project Runway aspirants are interested in making doll clothes:

We all have different 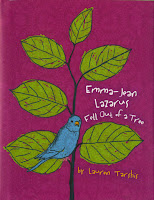 opinions about the Newbery choice each year. Sometimes we love it, sometimes we hate it, and sometimes we hate it so much that one of our friends ends up screaming, “We know! We know you hate that book! You haven’t stopped talking about it for months! The award’s been given, it’s over and done with and there’s nothing you can do about it, so please SHUT UP!” (My grown-up response? “MAKE ME!”) It’s now been nearly two months since this year’s awards were announced and I still really regret that Ruth White’s WAY DOWN DEEP, that beguiling story (with a touch of magical realism) about the denizens of a 1950s West Virginia boardhouse and Lauren Tarshis’ wonderful character study, EMMA-JEAN LAZARUS FELL OUT OF A TREE, didn’t at least make the Honor list. Both books are unforgettable and I hope they find an audience -- silver award sticker or not.

SOMEDAY THE PRINTZ WOULD HAVE BEEN USEFUL TO THIS ONE TOO 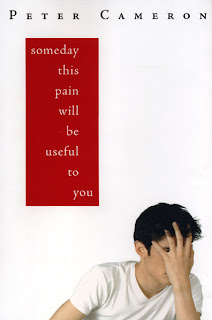 Three or four years ago, I tossed and turned all night and uncharacteristically woke up right at dawn on a summer Sunday morning. My clock-radio was on and I heard the sound of kids arguing about going to a party. I turned the radio up and was soon drawn into a radio drama. A radio drama in the twenty-first century? It was called DOWN GILEAD LANE, a continuing story about the Morrison family who live in the midwestern town of Coleraine. Produced by CBH Ministries, every episode contained an overt religious message (I guess that's why they run it Sunday mornings), but what impressed me the most about these shows was how contemporary and non-stodgy the series actually was (with episode titles like “Bo-Ring!” and “Snot Fair.”) The plots were tightly written, the huge cast of characters was well-developed, and the dialogue was just right. The creator of this series was named Beth Klima (later Culp) and I read on the show’s website that her goal was to write children’s books. I could definitely see that, because each episode of the show seemed like a chapter from a wonderful children’s book. Beth Culp (who was very young when she created and began writing this series) left the show a couple years ago, but I hope she’s out there trying to write a children’s book. I’d definitely be anxious to read it!

UP THE DOWN READALIKES

Earlier this week I blogged about one of my favorite adult novels, UP THE DOWN STAIRCASE, which utilizes a series of notes, class assigment, letters and memos to relate the narrative.Any young person interested in reading a similar type of book might like Jennifer L. Holm’s MIDDLE SCHOOL IS WORSE THAN MEATLOAF, a fun story told mostly in graphics, which was published in 2007. 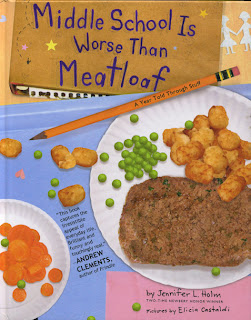 And 2008 brings Steve Kluger’s MY MOST EXCELLENT YEAR, a young adult novel which also uses a non-traditional narrative style.

Overheard in a bookstore: A nine or ten year-old boy pulled a book off the shelf and showed it to his sister, “Hey, another book by Madeleine L. Engle.”

(Why not? I could never pronounce her name either.)

ANOTHER BOOKSTORE, ANOTHER DAY

I walked into another bookstore on Friday and saw a display of a new board book edition of HORTON HEARS A WHO; this one has a plush elephant head poking right through the front of the cover. It was a slow evening at the store, and I was only there for twenty minutes, so imagine my surprise when I was leaving and noticed the display was empty. The owner of the store said they’d sold two copies in the past five minutes. Sounds like this book is going to be a huge hit.

WHO IS THIS BOOK FOR?

All my life I’ve heard a story -- possibly apocryphal -- that Michigan State University owns a cow with a glass stomach. Students study him (I know, I know...if it’s a cow, it’s a her) to see how food is digested, etc. I was reminded of that cow when I saw an ad for this book: 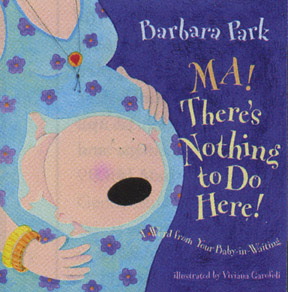 I think this picture would have confused me as a child. But the title makes me think this is another of those children’s-books-that-are-not-for-kids. “Your baby” seems to address the mother. Plus the baby is calling out for “Ma,” not “Big Bro” or “Big Sis.” This book may sell well for baby showers and such, but I have an inkling it’s not really for child-readers.

I was just talking to a couple people about the perils of doing crosswords and sudokus at bedtime -- pencil marks sliding across the page as you start to doze off, getting stabbed by a pencil in your sleep. But that’s nothing compared to what I go through every night when I read before bed. Holding the book in front of my face, I’ll start to fall asleep ten...fifteen...maybe twenty or thirty or even fifty times...with the book slamming into my face over and over as I struggle to stay awake. If you ever hear me say “This book knocked me out!” I might not be effusively praising its qualties -- I may simply be stating facts.
Posted by Peter D. Sieruta at 2:43 PM

I am totally with you on Way Down Deep. It was my nomination for the Cybils award, and I think it is a truly lovely book. I am also with you on Emma-Jean-- after reading the copy I'd bought with Friends of the Library money for our children's section I had to go out and buy another for myself.

Peter I had to laugh when I read that your car now has the correct time, that was my first thought with this time change, my car wiil now be correct.
I too took that speed reading class in high school. I prefer the way I read now nice and slow, I don't want to miss a single emotion or the possible intention of the author. And better still how the story relates to my life. Most times there is a story within the story.
I have loved to read for as long as I can remember. We had a bookmobile that came and stopped in front of our house. I was usually the first on and the last one off. I checked out the maxium # books and would be waiting for the visit two weeks later. At age 12 I wanted OLDER books like romance! Been there done that need no more!
But in 1980 as an adult, I found "Hitty", now this began a true love story, children's books! So thank you for the Hitty links. Any other Hitty fans out there?
Thanks so much for taking the time to write this blog, I love it! I read it diligently and with all the infomation I'm gaining I will one day have a "Psierut book blog degree".
Marilyn

Sorry Peter, but American Kit Co. is no longer in business. So treasure the Robert Raikes Hitty - there won't be any more. Check Hittygirls.com and the Yahoo Hittygirls list for more than you ever wanted to know about Hitty! We Hitty nuts also read children's books about other wooden dolls, and spend lots of time in their worlds.
Elaine

Robert Raikes Hitty Dolls are getting harder to find. Since the American Kit Company is now closed, the secondary market is the only place to get a Raikes Hitty.

I¡¯ve been shopping for some time for any nice content material articles in relation to this particular level . Looking out in Yahoo and google I lastly discovered this url. After studying this submit I'm delighted to say that I get an exquisite uncanny feeling I stumbled upon the very issues I used to be trying for. I most definitely will make sure to don¡¯t forget this weblog and have a look consistently.