Welcome to another Sunday brunch at Collecting Children’s Books, consisting of some random facts, thoughts, and opinions about books for young people.

A recent mention of Elizabeth Borton de Trevino on this blog made me wonder if this Newbery-winning author (I, JUAN DE PAREJA) was still alive. The last I heard, she was living in Mexico and nearing one hundred years old. However, a trip to the Wikipedia tells us “According to the Social Security Death Index, Elizabeth Borton de Treviño died December 2, 2001 in Texas at age 97.” I wonder if this was noted by any of the children’s book publications. I remember being surprised, some years back, when I stumbled across information that the 1964 Newbery winner, Emily Cheney Neville (IT’S LIKE THIS, CAT) had died in 1997. I don’t recall that obituary getting much attention either. Even the Wikipedia still lists her as being alive!

Has there ever been a 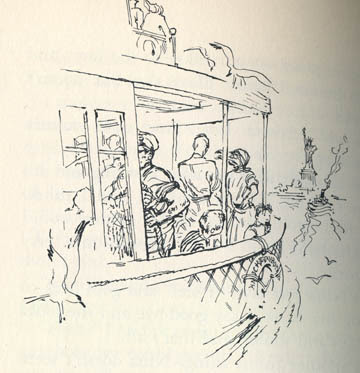 young adult novel that presented a more vivid portrait of New York City in the 1960s? The Big Apple almost assumes the role of another character in this book as protagonist Dave Mitchell (who lives near Gramercy Park) rides his bike to Brooklyn, sees a play on Broadway, eats hot pastrami on Staten Island, visits the Fulton Fish Market, and meets his girl at Coney Island on a cold and windy autumn day.

IF YOU LOVE NEW YORK

You might want to get a copy of STORIED CITY : A CHILDREN’S BOOK WALKING TOUR GUIDE TO NEW YORK CITY by Leonard S. Marcus. This little book contains over twenty walking tours that will have you exploring Harriet the Spy’s upper east side neighborhood, Chester Cricket’s Times Square, and the Brooklyn Heights home of Tucker Wolf (protagonist of M.E. Kerr’s DINKY HOCKER SHOOTS SMACK!) at 105 Joralemon. (Dinky herself lives on nearby Remsen Street, which also happens to be the same street where the protagonist of Richard Peck’s FATHER FIGURE lives.)

I’m wracking my brains trying to think if any children’s or young adult books have been made into Broadway plays. The only one I can remember is THE TAP DANCE KID, a musical based on Louise Fitzhugh’s NOBODY’S FAMILY IS GOING TO CHANGE. I guess ONCE UPON A MATTRESS might count, as it was based on the fairy tale “The Princess and the Pea.” Carson McCullers’ THE MEMBER OF THE WEDDING and Gregory Maguire’s WICKED were both published as adult books, but have a young-adult sensibility; WICKED is particularly popular among young playgoers. Teens also flock to youth-centric shows such as HAIRSPRAY and RENT. This makes me think that Broadway producers looking for a blockbuster would be wise to start commissioning playwrights to adapt young adult novels for the stage. 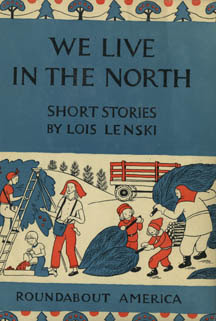 Who remembers reading Lois Lenski’s regional stories, which were set all over the United States of America? I loved reading these as a kid, but particularly enjoyed the two books she wrote about my home state of Michigan: WE LIVE IN THE NORTH and HIGH-RISE SECRET. I wonder if most Lenski readers were drawn to reading about unfamiliar and faraway places, or preferred books that depicted their own region? I wonder if the publisher ever kept statistics to see if each “regional book” sold best within its home region.

From time to time there are complaints that the Newbery Award ignores nonfiction books, but did you know there was one year when four of the five books honored were nonfiction? In 1951, the winning book was AMOS FORTUNE, FREE MAN, the biography of an American slave, by Elizabeth Yates. The Honor Books were the biographies BETTER KNOWN AS JOHNNY APPLESEED by Mabel Leigh Hunt, GANDHI : FIGHTER WITHOUT A SWORD by Jeanette Eaton, and ABRAHAM LINCOLN : FRIEND OF THE PEOPLE by Clara Ingram Judson. The only fictional honoree? THE STORY OR APPLEBY CAPPLE by Anne Parrish.

One of the most talked-about young adult novels of this past pubishing season was the English import BEFORE I DIE by Jenny Downham. Tracing the last months of a dying teenager and ending, literally, with her last conscious thought, BEFORE I DIE was described as “vibrant,” “transcendent,” and “life-affirming.” The New York Times Book Review 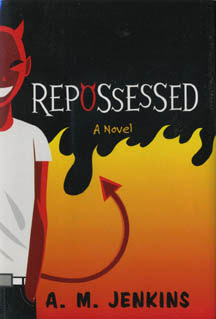 said “that the reader can finish its last pages feeling thrillingly alive.” I’ll offer a dissenting opinion: I found the book depressing, sad, and finished its last pages feeling like I’d just barely survived a near-death experience. I did, however, recently read a rather unlikely book that does deserve to be called vibrant, transcendent, life-affirming and thrillingly alive. It’s REPOSSESSED by A.M. Jenkins, the story of a demon claiming the body of a modern American teenager. The book is fast-paced and amusing, but what I enjoyed most was the narrator’s reactions as he discovered human senses and his exuberant joy at being able to see and feel and taste and touch. This Printz Honor book makes you think about the simple pleasures of eating ketchup and waking up in the morning.

I just read two new books by Siobhan Dowd. A SWIFT PURE CRY is the story of a disadvantaged Irish girl dealing with an unexpected pregnancy; THE LONDON EYE MYSTERY concerns a boy with autism or Asperger Syndrome who uses his different way of thinking to solve the mystery of his missing cousin. Both novels feature strong settings, well-developed characters, and powerful first-person voices. Unfortunately, the conclusions to both stories are rather weak, marring otherwise compelling narratives. It’s particularly sad to note that Siobhan Dowd recently died at a fairly young age; she would have had quite a future in children’s and young adult fiction.

A young adult author of my acquaintance told me she never wants titles to be written in cursive writing on the covers of her books. Why? “Because kids today don’t know how to read cursive.” I found that hard to believe, so asked my friend to clarify. She said that kids who write her fan letters sometimes ask her not to reply in cursive handwriting “because I don’t know how to read it.”

I was washing clothes today when I discovered the old chair next to the washing machine had writing on it. Obviously a wet bag or container was set on top of the chair and somehow the writing bled off and now appears, backwards, on the seat. It made me think of all the books I’ve read...the enduring power of the written word...and all the stunning bits of dialogue and description that, over the years, have emblazoned themselves on my heart and imprinted themselves on my mind.

Now, for the first time, I have words imprinted on my seat. 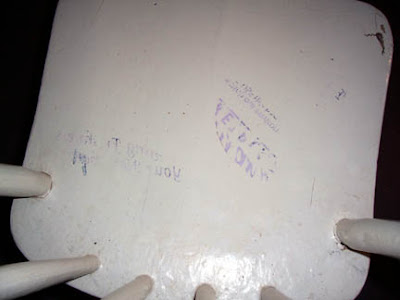 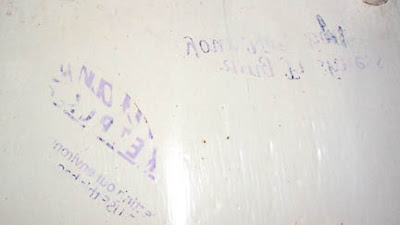 I started reading your blog after Lee Lowe (YA author and blogger: Lowebrow dot blogspot dot com) recommended it. It's a great read!

I stumbled across a daddy blog which had a post that made me think of you.

It would be easy to presume that you would choose mud flap as the worse condition, but I'd love to hear your thoughts on the subject.

Drop me an e-mail if you like: isdihara at verizon dot net

or check out my blog:
isdihara dot blogspot dot com

Would "Into the Woods" count as a play/musical from a children's book? I think it rightly could be counted.

How about "Really Rosie" from the Sendak books? Wasn't a live version on Broadway sometime after the animated TV version?

And the Wizard of Oz was on Broadway long before the movie. And would you count Peter Pan?