An Icy Blast from the Past : A DAY ON SKATES

Some years ago, a friend of mine went to Florida on vacation and visited one of the big amusement parks. When she returned, she mentioned the killer whale that did backflaps in a pool, the dolphins that grabbed fish right out of their trainers' mouths, and the water-skiiers who ended their routine by forming a pyramid on each other's shoulders. But mostly she wanted to talk about the ice-skating show she'd seen.

"An ice-skating show -- in Florida?" I responded.

"Yeah, it was pretty weird," she admitted. "But when you're walking around in hundred-degree heat and come across an air-conditioned building, you'll stop to see anything."

According to my friend, the ice-skating show was held in a small, dark theatre. There wasn't any ice on the tiny stage, just some kind of skatable Teflon-like surface. The houselights dimmed and wintry music began to play. Then a girl began gliding back and forth across the Teflon -- a routine which got real old real fast considering the stage was only about ten feet wide. The girl was dressed sort of like Peter Pan, though she had a couple cut-out glittery snowflakes pinned to her shoulder and hat. When her routine was over, she went to the front of the stage and gave a big wave to the crowd, saying in a squeaky voice, "Hi! I'm Jackie Frost!"

The audience, stupified by the heat, did not respond.

No response. She should have known right then that the "audience interaction" part of her program was going nowhere, but still she persevered.

"Boy it's hot here!" she squeaked, exaggeratedly using the back of her arm to wipe sweat off her forehead. (I believe they call it "flop sweat.") She marched to the front of the stage and addressed the audience: "Hey, where am I, anyway? I'm supposed to be in New York, painting the leaves in Central Park red and gold and etching lace on all the windowpanes! But this is much too hot for New York. Where am I?"

A heckler in the front row shouted, "You ARE in New York!"

Clearly, this was not the expected answer and it threw Jackie off her script. She looked around wildly, and pointed to a teenage girl in the audience and said, "Do you know where I am?"

The girl said, "You ARE in New York."

Jackie appeared even more desperate and began looking for a sympathetic face. Finally she saw a sweet-faced grandmotherly type in the second row. "It's so hot in here that I think I MUST be in Florida," she said, then pointed to the older woman and said, "Is that where I am?"

"No," the woman replied. "You're already in New York."

By this point, Jackie Frost knew she'd lost her audience and just wanted to get this show over with, so she ad-libbed and skipped ahead in her script, saying, "Well...uh..wherever I am, I...uh...have to get to New York to paint the trees and windowpanes. I need to jump on the wind's back and fly from...uh...Florida to New York!"

Then to the tune of "New York, New York," a guy as big as a linebacker skated onto the stage dressed as the wind. (Don't ask.) He lifted Jackie over his head and began spinning faster and faster in place. I don't know if he accidentally let go of her or if she was so unnerved by the audience's previous response that she let go herself, but she ended up flying out of his arms, zooming over the first two rows of the audience and crashing in the aisle.

"At first we thought it was part of the act," my friend reported. "Especially since the guy on stage just stood there, with his arms still raised over his head and a dumb look on his face, not saying a word."

"Well, like two minutes went by and Jackie Frost kept laying there and nobody said anything. Then finally they turned up the houselights and told us all to leave using the other aisle."

I've included this rather long introduction to show that cloying, corny routines personifying Jack (or Jackie) Frost simply don't work. They didn't work when my friend went to Florida in the 1990s and they didn't work in 1934 when Hilda Van Stockum began her Newbery Honor Book A DAY ON SKATES : THE STORY OF A DUTCH PICNIC with an extended riff 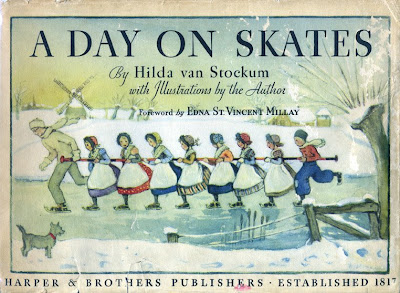 on "Father Frost" descending on a Dutch village, where he turns raindrops into snow and water into ice with a few puffs of his magical breath. Fortunately, the story soon becomes much more naturalistic as Dutch twins (not THE Dutch Twins, but a different pair) named Evert and Afke prepare to go on all-day skating picnic with their classmates and teacher. During the course of the day, they skate far out the long canals, stop for "snow pancakes" and korstje (a Dutch cake), experience some scares when Evert falls under the ice and gets locked in a church bell tower, and travel home by horse and sleigh in the dark.

A DAY ON SKATES strikes me as a rather odd Newbery Honor Book. Eight inches tall and eleven inches wide, the forty-page volume resembles a picture book. In fact, its double-column text (another oddity) is so frequently interrupted by Van Stockum's line drawings and full-page color paintings that some have suggested this book, published 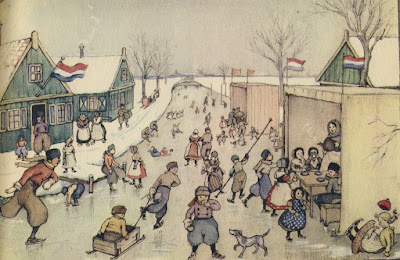 before the inception of the Caldecott Medal, would have been more worthy of that award than the Newbery. As a story, it certainly does not hold up to that year's Newbery recipient, DOBRY, one of the finest (and least known) of the early winners. Reminiscent of HANS BRINKER, A DAY ON SKATES features mild adventures -- mostly starring the boys; Afke and the other girls seem like they can barely skate without holding on to a pole...and when Evert considers Afke for his explorers' club, he expects her to be the cook. Despite its few flights of Father Frost fancy, the book does a nice job of creating a wonderfully wintry atmosphere and providing details of Dutch life in both the prose and illustrations. The foreword by Edna St. Vincent Millay seems another oddity, as she had nothing to do with the publication of this volume as far as I know and her patronizing comments ("You will meet in these page no dull little Miss Good, no tiresome little Master Naughty") are dated even by 1934 standards.

A DAY ON SKATES : THE STORY OF A DUTCH PICNIC
Written and illustrated by Hilda van Stockum
Foreword by Edna St. Vincent Millay
Published by Harper and Brothers, 1934

It's an ODD Newery Honor Book.

The illustrations are superb.

It was the author's first book.

Bound in blue cloth with black printing and illustrations on the front panel.

Price of $2.50 at top of front dustjacket flap; advertisement for the book THE SPIDER'S PALACE on the back flap.

The title page has "19" and "34" printed on either side of the Harper colophon.

The words "FIRST EDITION" and the publishing code "E-I" are on the next page.

Extremely difficult to find in any edition, but Harper copies are the most difficult to find at all. I imagine the price for a good copy would be somewhere north of $200 at the least.
Posted by Peter D. Sieruta at 1:55 PM

This book is actually available online in it's entirely. You could download it and print it out if you love paper copies, or keep it on your computer. I found it last year online and was quite taken with it myself, but I do like old books so!

Sites like this are a wonderful way of making available old books that some of us may just be discovering!