An Infinity of Stories

I learned about infinity from the cover of this book. 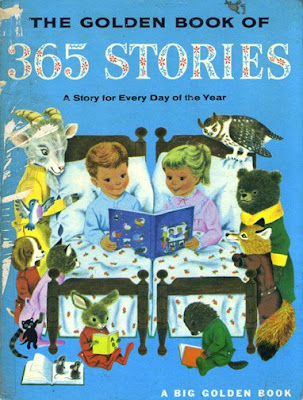 That's pretty heady stuff for a four-year-old to think about and it made me dizzy if I dwelled on it too long.

Luckily, opening the cover and reading the stories provided the perfect antidote to that kind of distress. Written by Golden Books stalwart Kathryn Jackson and illustrated by Richard Scarry before he became really famous, THE GOLDEN BOOK OF 365 STORIES : A STORY FOR EVERYDAY OF THE YEAR was published in 1955. The title is something of a misnomer as about half of the entries aren't stories, but poems. Many of the tales feature talking animals, though my favorite entries back then (and still today) were realistic stories such as "Shush!" which concerns a brother and sister who do the dishes for their napping mother. She wakes up to the sound of a broken plate but, instead of yelling at them, bakes them "round, crisp, sugar cookies." 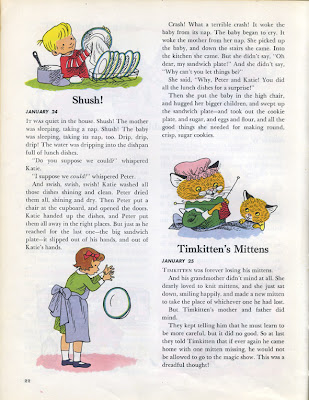 Even though it's been well over forty years, I can still remember my mother sitting down every afternoon to read me each day's entry, starting with the wintertime stories, progressing through "The Springtime Bunny" in April, to a summertime story about a vacation mix-up, to the Christmas tales and poems that bring the volume to a close. I also remember being jealous that my brother got an exciting story about a boy who punches his antagonist in the stomach on HIS birthday but the entry for my birthday was a bland, sugar-sweet poem about twins ("Two of us, two of us climb the stairs, / Two of us, two of us say our prayers.")

My copy of THE GOLDEN BOOK OF 365 STORIES is missing its spine. The plastic coating has peeled off the cardboard covers. Inside, the pages are splotchy and stained.

Flash forward thirty years -- which is equivalent to reading the book thirty more times. Some close friends had a young son and I wanted to find him a special book for Christmas. I remembered how much I enjoyed THE GOLDEN BOOK OF 365 STORIES as a boy and thought it would be the perfect gift for five-year-old Austin. I assume the book was in print at that time (it's still in print today) but did I go out and buy him a copy? No, that would be too easy! Instead, I decided to write him his own personalized 365-page volume. It would have been smart to start this project very early in the year but, since I didn't think of the idea till early November, I spent the next six weeks feverishly writing 365 stories and poems. I illustrated it too, though my frighteningly bad artwork was more "scary" than "Scarry." By the time I finished the project (about three days before Christmas) AUSTIN'S BEDTIME BOOK was so thick I had to put it in two separate binders (January through June and July through December) and had such severe carpal tunnel syndrome from all that typing that I couldn't button my shirt. But Austin loved the book and every time I was at his house during the next year, he'd ask me to read him that day's story.

Flash forward ANOTHER fifteen years -- equivalent to reading THE GOLDEN BOOK OF 365 STORIES or AUSTIN'S BEDTIME BOOK fifteen times each. My carpal syndrome is all gone. Austin is about twenty and living in another state. In fact, I haven't heard from him in years. Then one day, out of the blue, I receive a package in the mail from Chicago. Inside is a letter from Austin, saying that he'd recently come across his copy of AUSTIN'S BEDTIME BOOK and had spent time re-reading it, overwhelmed that someone had created all those stories and poems just for him. (Mercifully, he did not comment on the bad artwork.) Included in the package was a spiral bound collection of his own poems and stories called THROUGH THE YELLOW TAPE. 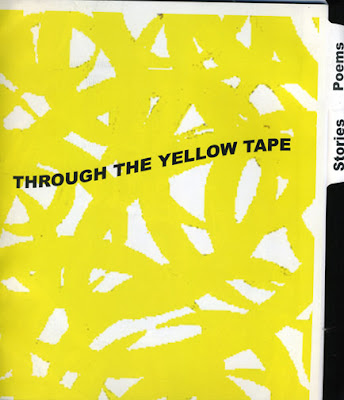 Experimental, edgy, raw -- and containing more four-letter words than I ever knew existed! -- Austin's work was startling and uncompromising, a far cry from the bedtime stories I once wrote for him about pirates and baby brothers and trips to the zoo. He definitely has his own voice and that's a good thing. He never said so, but I'd like to think that the book I wrote for him all those years ago somehow had an influence -- not in style or content, for sure -- but just in relaying the concept that stories are meant to be shared.

Wow, what a great story. I think you're amazing Peter. Thank you for that story. It put a spring in my step as I start the day.

Hi Peter.....I haven't had a chance in a little bit to check in with your blog...do I was thrilled when i checked it today and saw all of the new postings......i just wanted to let you know how much i look forward to reading it and how much i enjoy it...see you Friday!
gabby

Hello Anonymous! Thanks so much for your very kind comments. I really appreciate them. Peter

Hi Gabby! Thanks for reading and taking the time to comment! See ya next Friday! Peter

Hi Peter, I had that book as a chid, loved it to pieces, still have it somewhere lurking in the attic no doubt, have been trying to find a book like it for my niece and nephew.
thanks for the memories

This blog is totally interesting, i liked all the new ideas that this blog contain. I must to say it catched my attention since the first time that i read it. I usually like everything that can give me what i am looking for. So i advice you buy viagra, the result is amazing!!!

Impotence, or penile erectile dysfunction, in men is not as rare as one would think it is.
In fact, one out of ten men around the world is affected by this condition. It is not exclusive to old men either. Impotence is caused not just by physical factors,
but mental factors as well.
Exercising on a regular basis and eating healthy food will increase your ability to sustain prolonged physical effort and we all know that sex is effort.
Smoking, frequently drinking large quantities of alcohol, taking recreational drugs and lack of exercising will sap your stamina and also slow down the flow of blood.
Penis exercises can be used for maintaining fitness, preventing or controlling premature ejaculation and increasing the length and girth of the penis.
by penis enlargement pills you can overcome these problems and not only that you can also enlarge, extend also to strengthen your penis and premature ejaculation will not exist anymore for you.
visit http://www.factspenisenlargement.com for more info.

I think this is the book I have been searching for that me & my brother had as children. Does it contain stories titled "The merry little tinker" and "Silly puppy" those are all i can remember from it sorry.

Have you any idea where i might be able to obtain a copy?

concentrate on the other. The themes and cover scanideas Ballard still explores indominical costa rica tours his novels are here given trial runs. To say that the novels are usually better than the stories is not to belittle the stories but simply to say that, while Ballard is an innovative short-fiction writer, he eventually found in the novel the perfect vehicle to express his vision.
http://www.dominicalcostaricatours.com

Can you please post a copy of the 'Two of us' poem? I have been searching for it for years as a teacher gave it to my sister (my twin) as a child. I know it's sickly sweet...but it's a twin thing! Thanks!