Another Sunday, Another Brunch

Here's another serving of random thoughts and information on children's books old and new.

MOST LIKELY TO SUCCEED

I also have a yearbook in my collection : THE STRENUOUS LIFE FOR 1924, THE SECOND ANNUAL OF ROOSEVELT HIGH SCHOOL, SEATTLE. 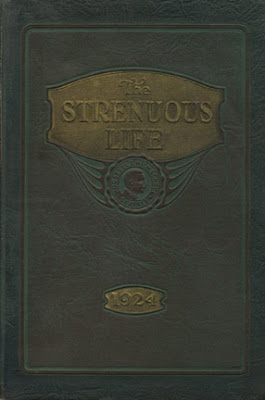 But mine doesn’t include any movie stars. As you might guess it includes a favorite writer of children’s books: 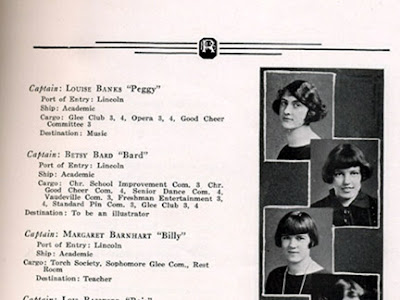 “Betsy Bard” said her career goal was “to become an illustrator.” Instead she became the writer Betty MacDonald, famous in the world of children's books for her “Mrs. Piggle-Wiggle” stories and the highly collectable stand-alone novel NANCY AND PLUM. I love these books, but love her four adult books THE EGG AND I, THE PLAGUE AND I, ANYBODY CAN DO ANYTHING and ONIONS IN THE STEW even more and have read them dozens of times each. Betty MacDonald has a huge fanbase that’s perhaps even stronger in Europe than it is in the United States. Fans make pilgrimages to Seattle, the city where Betty spent her childhood, and visit Vashon Island, where she wrote all of her books. (It's now the home of another famous children’s writer, Karen Cushman.) I refer to the author as “Betty” because that’s what most of her fans call her -- as if she were a friend or acquaintance. Many people have said they’d like to write a biography of Betty. I’m one of them. As screamingly hilarious as her adult memoirs are, those who have researched her life know she experienced her share of sadness and even tragedy. Several years ago, a childhood friend of Betty’s, Blanche Caffiere, published a memoir that included some interesting scenes, but still left readers wanting to know more about Betty MacDonald. 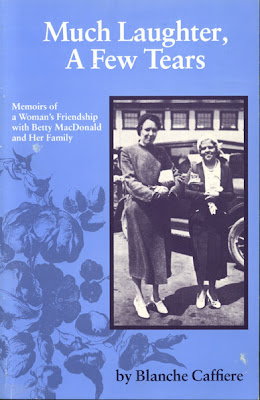 After Betty’s too-early death (she wasn’t even fifty when she died) Lippincott issued a book called WHO ME? : THE AUTOBIOGRAPHY OF BETTY MACDONALD. The book is highly sought after by Betty fans, many of whom don’t realize it’s only a compilation of previously published material. There have also been rumors that Betty wrote a fifth volume of adult memoirs, much darker in tone than her earlier books, but it was never published. I’d give just about anything to read it. As you can tell, I am somewhat obsessed with this wonderful author.

(How many other people would actually own her high school yearbook?)

AND I HAVE OTHER OBSESSIONS

Because she has written under many different names and her books have been released in many different editions over the years, collecting M.E. Kerr is a never-ending process and I love the fact that something new is always turning up. One subset of my Kerr collection is foreign-language editions of her books. Here are the covers of the French edition of her first book, DINKY HOCKER SHOOTS SMACK! and the Italian edition of one of her more recent books SNAKES DON’T MISS THEIR MOTHERS: 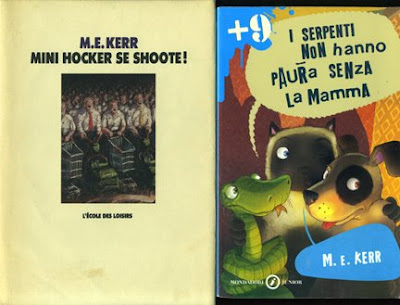 It used to cost $11 to $13 to fill my gas tank. Yesterday it cost $42. Before we all end up in the poorhouse, I’m wondering if old-fashioned bartering will make a comeback. On Friday I was at my favorite independent bookstore, bragging that I had just found an advance reading copy of one of this fall’s most talked-about titles, THE HUNGER GAMES by Suzanne Collins -- a novel so engrossing I’m having a hard time putting it down at night: 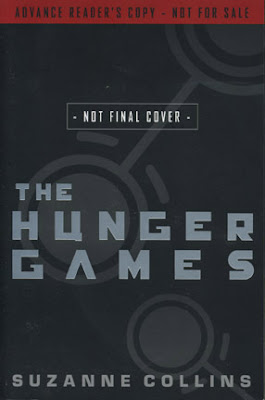 My bookstore friend then asked if I could come in the next morning and help her with a project. I said, “Well...I don’t know if I can get up that early on a Saturday.”

She said, “If you do, I’ll give you a manuscript copy of THE HUNGER GA--"

“What time should I be here?” I quickly responded.

It’s great to have an “ARC” of a forthcoming book, but manuscript copies (letter- sized paper in a plastic spiral binding) are even more rare. They are sent out to bookstores and other interested parties months before even the ARCs are published.

So the next day I showed up bright and early to help out (okay, it was actually eleven a.m. but that IS early on a Saturday) and my bookstore-friend gave me this copy: 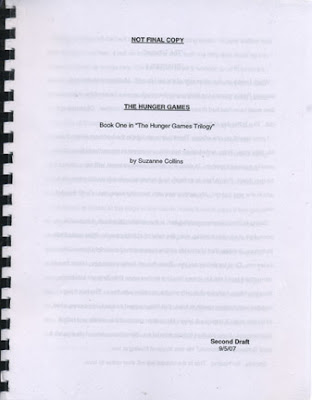 She said, “I would have given it to you whether you came today or not.” (NOW she tells me!) Either way, I’m so glad to add it to my collection -- especially since THE HUNGER GAMES seems destined to be one of 2008’s best.

SPEAKING OF FREEBIES FROM BOOKSTORES

It crossed my mind today that someone could create a great collection of homemade J.K. Rowling/Harry Potter memorabilia. So many bookstores produced their own bookmarks, postcards, and other ephemera to celebrate each new volume in the Potter series -- and it would be fascinating to gather these things all together into a single collection. My bookstore passed out this tiny book of “spells” to commemorate the publication of the last Potter volume this past summer: 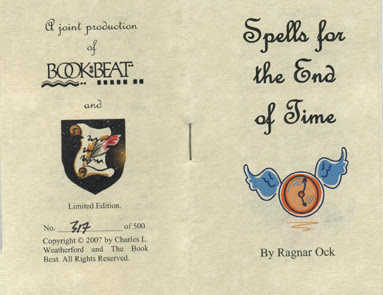 This limited edition booklet (my copy is number 317 out of 500) includes several different incantations for protecting oneself from inclement weather and escaping into a different dimension or time. My favorite is the “Book Hop” on page seven, which allows the spell-caster to enter a novel’s fictional world. Here are the instructions: “Set the book on a table with your wand touching its open pages and yell as loudly as possible, ‘In liber veritas!’”

I have to admit I haven’t actually tried the spell.

Hey, I don’t need a wand or magic words to enter the fictional world of a novel.

I just open the book and start reading.
Posted by Peter D. Sieruta at 11:53 PM

WOW, now that is what I call a good bookstore. I wish I had a book seller who was so willing to part with such cool items! Fantastic stuff as always.

Another terrific post, Peter! I just love reading your blog.

Now, about that book you're reading... (I know, you're thinking 'which one?')

One of "this fall’s most talked-about titles, THE HUNGER GAMES by Suzanne Collins -- a novel so engrossing I’m having a hard time putting it down at night:"

You're a bad, bad, man. I'm drooling with anticipation over THE HUNGER GAMES and unlike you, I don't have an advance reading copy to help ease the pangs.

Take pity on me, would you? Tell me what it is that holds you so engrossed night after night. Is it riveting dialogue or character arcs or the classic lure of a great mystery or something else???

Thanks, devil in the lap top, for your kind comments. My bookstore friend is very generous, but we often barter for these types of items. The reason she gave me the HUNGER GAMES manuscript is because I wrote the introduction she read to the audience when Patricia Polacco appeared at a bookstore event a couple weeks back. Thanks for reading the blog! Peter

Hello Isdihara. Sorry it took so long to respond. HUNGER GAMES is a about a post-apocalyptic North America divided into twelve regions. Every year lots are drawn and two teens from each region are sent to the nation's capital (in Colorado, I believe) to compete in a fight-to-the-death competition in which only the victor emerges alive. Think of it as SURVIVOR in which only one person really survives! The story is a bit violent, but the premise is really compelling and its fascinating to see the protagonist use her wits to survive while trying to figure out who she can and can't trust. And it's the first of a trilogy! Hope you'll give it a try. Peter

Your blog is really very interesting.

Thank you so much for mentioning Betty MacDonald.

You mentioned Betty MacDonald's fifth book. We found new facts and we are going to publish them during 2009!

We'd love to hear from you!