I love to read, but hate to weed.

Yet as every book collector knows, there are times when -- despite double-shelving, despite horizontal stacking -- you simply run out of space. Of course there are sometimes ways to work around this. I know people who have rented storage units for their books. I heard of someone who bought a backyard storage shed for his paperback novels and, when that was filled, he bought another...and then another...until his property looked like a small town crammed with miniature houses. And then there is the man whose bathtub is filled with books.... Yes, this is a true story -- and I have no idea where or how or if he bathes.

As any gardener will tell you, weeding is necessary if you want your garden to thrive and grow. I guess the same is true for a book collection. How can we add new and better volumes if our shelves are already choked with unnecessary items of sometimes dubious merit? For me, weeding is often painful. The Newbery first editions stay. Certain authors stay. Some books remain because they were treasured gifts, or because they remind me of a certain time and place in my life. Some have special stories attached to them. Usually I'm able to come up with a least a few that, I deterimine, I'll probably never read again and can probably live without. (Though I have to admit, there have been times I've gone back and bought another copy of a book once hastily weeded out.) When I pull a book from my shelves, I get some comfort from the fact I'm going to donate it to the library where, presumably, many other people will enjoy it.

I often daydream about my books (or maybe I should call them my ex-books) sitting on library shelves for decades and decades bringing pleasure to hundreds of readers, even after I'm long gone. But in truth, libraries are often downright cold-blooded about weeding! One children's librarian -- a ruthless weeder (try saying that five times!) if there ever was one -- told me, "Libraries have space issues too. If a book hasn't circulated in the past three years, it's outta here!"

"But...but what if the 'perfect reader' for that book -- the one kid whose life will be changed by that one book! -- walks in tomorrow and you no longer have that title in the collection?" I asked.

"Then they can interloan it from another library," replied Ruth Lessweeder.

I guess. Provided the other library hasn't also weeded it. Besides, some of the most important books in my life are ones I just stumbled across on the library shelf as a kid. That's not going to happen if a book's already been weeded out.

A very wise librarian once told me, "When we add a new book to the collection, it may not be checked out tomorrow...or next year...or even ten years from now. But a hundred years from now, someone is going to need that book and they'll be glad we have it." I agree with that philosophy. I even believe that libraries should keep old, old books that contend insects spring forth from spontaneous generation and boys become doctors and girls become nurses. Not because we believe such things these days, but because those books serve an historical purpose, telling us where we once were and how far we've progressed since then.

The reason I'm thinking about this issue is because we're getting ready to weed out the children's book collection at the library where I work.

The good news is that no one plans to get rid of our "only" copy of any title. If we just have one copy of a book, it will remain.

(The other good news is that there's a children's book collector named Peter on the staff who will throw himself, Barbara-Fritchie-like, in front of any book that he thinks should not be weeded out.)

What we plan to do might best be termed "thinning the herd." We have multiple copies of many titles here and, as one librarian said yesterday as we strolled through the stacks, "How many copies of WITCH OF THE CUMBERLANDS do we really need?" 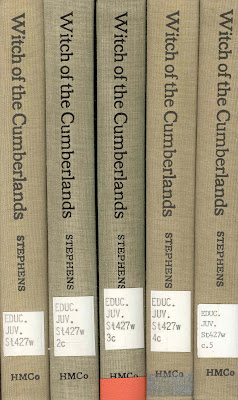 I didn't tell her that I actually have my own copy of this mostly-forgotten 1974 novel by Mary Jo Stephens at home because I love it so much. I do tend to agree our FIVE library copies could judiciously be pruned down to one or two without too many complaints. But even weeding multiple copies can be tricky. For example, do you keep the old, frayed copy in its original binding -- the book closest to the author an publisher's original intent -- or do you keep a rebound copy so sturdy it will last for decades?

And what will become of all the books that are weeded out? I imagine some will be donated to other libraries (who, in turn, will eventually weed them out.) Some will be sold for a dollar or two at a library book sale. I did have to smile when someone said the library had once considered -- perhaps in jest, perhaps not -- giving away the duplicate copies to patrons. So if someone came to the circulation desk with a stack of books and it turned out the computer had some of the volumes listed for withdrawal, the patron would be told, "These three books are due back July 5."

"But what about the other five books?"

"Oh, you can just keep those."

I weed. Sometimes I'm ruthless, sometimes not. But here's the thing in a public library: there ARE space issues. We can't afford a bigger building. This means getting rid of things that aren't circulating. Some titles I would never ever get rid of, but we're not a museum. We're a living, changing collection. Those outdated but historically significant volumes belong on a shelf somewhere, but not in my little public library.

I actually had that happen once - I sent away for a book through interlibrary loan and when I went to my local library to pick it up, there was a note on it that they didn't want it back and the patron requesting it could have it. It was, of course, an older children's book. The author and illustrator was Paul Brown, which means that the loaner library is now poorer in resources for any horse-crazy child. You can't replace Paul Brown with a sackful of Thoroughbreds or Saddle Club, it's like weeding Austen in favor of Jennifer Weiner.

The space argument doesn't cut it. Libraries are finding plenty of space to add cafes, DVDs, CDs, audiobooks, Internet access computers, etc. These are all great services, but when they're being made at the expense of books, it sends a signal that libraries are getting away from their original mission in an effort to draw in new patrons.