Products of an Earlier Era

I recently came across something that fascinated me: a 1933 catalog for Macmillan Books. 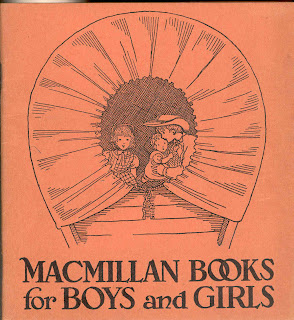 Inside were single- and double-page spreads introducing new books by such authors as Helen Sewell (BLUE BARN), Rachel Field (JUST ACROSS THE STREET), Berta and Elmer Hader (SPUNKY: THE STORY OF A SHETLAND PONY), Dorothy Lathrop (THE LITTLE WHITE GOAT), Alice Dalgliesh (AMERICA TRAVELS), and Padraic Colum (THE BIG TREE OF BUNLAHY.) It's entertaining to read the somewhat old-fashioned text. Authors are referred to as "Mr." and "Miss." One ad begins, "You flatter the intelligence and ambition of an older girl if you give her this book." The future Newbery Honor BIG TREE OF BUNLAHY is advertised in "the exact center of the catalog" because it's "the very heart of the new list, THE book of the fall for young and old." And I like the nod to us book collectors at the end of JUST ACROSS THE STREET, which asks: "Are you a Field collector?" then lists several of her titles before adding "Of course you have Hitty!" Of course.

I was familiar with all of the above titles, but one book was new to me -- NANCY by Ruth Alexander Nichols. Strangely, the catalog itself is "Dedicated to the real 'Nancy'" who is shown reading on the frontispiece: 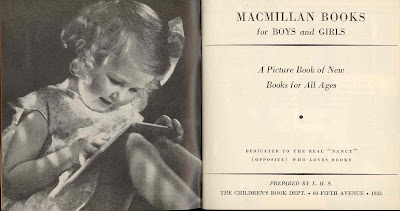 Several pages later we find the ad for NANCY, which begins, "We have never seen her -- but she is so real to us, that she has the frontispiece and dedication of this catalog. Mothers will 'oh' and 'ah' at these beautiful photographs. Children of Nancy's own age will appreciate her serious work (she washes and irons and hammers just like grown-ups) and her merry play." The photo on the opposite page shows the doll-like Nancy hammering nails into a board. 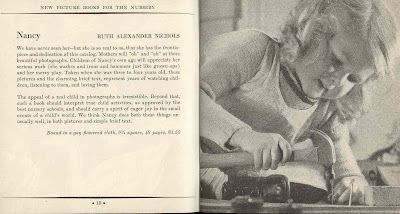 At first I was surprised to see such a non-sexist depiction in a 1933 book. My next thought was: a three-year-old using a hammer and nails? That picture would never be printed in a book these days without a note somewhere in the volume saying Children should not use tools without adult supervision! Nancy's mother was nearby when these pictures were being photographed!

I wanted to learn more about NANCY, but there is almost no information out there regarding this book. According to the Library of Congress, only seventeen libraries currently own the volume. And just one copy is listed for sale on the internet -- at $100. However I did find a copy of BILLY, the author's 1934 follow-up to NANCY, which features a curly-headed boy at work and play. I was lucky to find this book in the library because at present only ten other libraries are listed as owning it and not a single copy is available for sale. 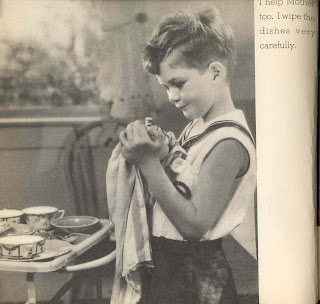 This is another book that I can't see being published today. Although ahead of its time in showing a boy engaged in activities outside 1930s sex role stereotypes, Billy is also pictured in some potentially unsafe adventures that probably wouldn't cut it these days. Like Nancy before him, Billy is shown pounding nails into a board. We also see him sawing wood, standing precariously on the sloping edge of a pond to launch a sailboat, and blowing-up balloons. (Today's books would note: Children should not use saws without parental permission! Do not play near the water without a parent or lifeguard nearby! Balloons are a choking hazard and should not be handled by children under ten years of age!)

Even this innocent picture probably wouldn't make it into a 2008 publication: 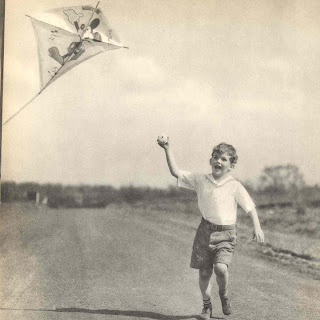 ("Get me the permissions department and see if we can use a picture of Mickey Mouse in one of our new books. Disney says no? Okay, we'll airbrush Mickey out.")

And photos such as this, as well as others depicting Billy disrobing and romping in the bathtub, might be considered too prurient and likely to attract the wrong kind of reader: 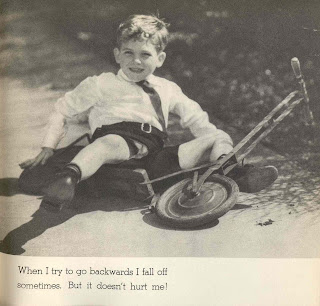 And would a book today ever show Billy dressed as an Indian or holding a gun? 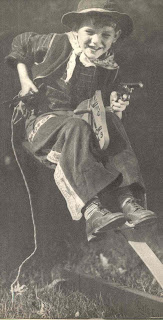 Don't get me wrong: some of these pictures would, depending on the publisher, likely find their way into books published in 2008. Others might not, due to twenty-first century sensitivities never considered in 1933 and 1934.

I'm not saying one era is wrong and the other is right. I'm just noting that children's books (like, no doubt, Nancy and Billy themselves, who must now be about eighty years old today) have certainly changed with the passing of years.

I wonder what images we find innocuous today will be considered "questionable" seventy-five years from now?
Posted by Peter D. Sieruta at 4:20 PM

Hey, Peter --- once again found my way to your site (for reasons which will follow shortly, and got COMPLETELY drawn into your "products of an earlier era" essay... Anyway, I've started a blog called "Nothing is wasted on the writer," and on the May 10 post, re Mother's Day, I mentioned you, your site, and the "polarizing express" essay you did.
Thanks again for your good work and insight.

Oh, I love those! Wouldn't it be cool to find out what happened to those kids...