For those who aren’t out celebrating Memorial Day weekend with picnics and backyard barbecues, you’re invited to a Sunday Brunch featuring random thoughts, facts, and opinions regarding children’s books.

Several years ago, Andrew Clements published FRINDLE, a much-loved novel for intermediate readers that went on to become a major bestseller. The dustjacket illustration by this year’s Caldecott-winner Brian Selznick is now iconic: 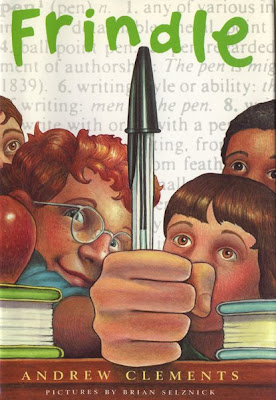 So it’s not surprising that Mr. Clements’ publishers chose to use variations of this same illustration on many of his subsequent books. Whenever I go in a bookstore and see a volume featuring a face and a big old hand prominently holding something important (a pen, a report card, etc.) I know Andrew Clements has a new book out. Here is a sampling of some of the covers. Can you find the ringer I tossed in -- a movie advertisement that so resembled a Clements cover that I did a double-take the first time I saw it in the newspaper? 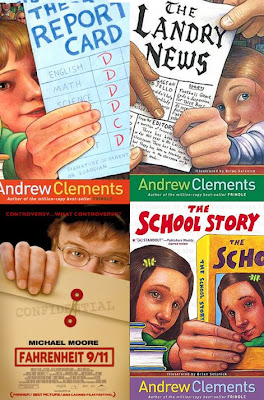 A previous blog entry discussed how rare it is for children and teenagers to publish books. But I’ve just come across one that was published by a high school junior in 1971: 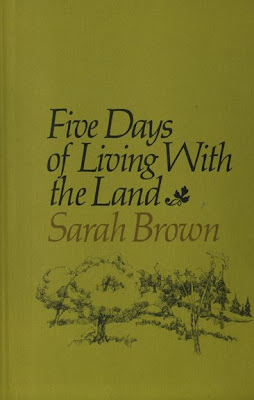 I was impressed by the subtlety of the presentation. If such a book were published today, I’m sure the young author’s picture would be on the cover or, at the very least, some banner would blare, “WRITTEN BY A TEENAGER, FOR TEENAGERS!”

I haven’t read the book yet, but it sounds very intriguing, relating Brown’s first-person experiences roughing it in the woods where she “boiled milkweed pods in water, drank sassafras tea, and ate roasted grasshoppers from a stick.”

I would think the book would still appeal to teenagers in this era of “living green” and (speaking of eating grasshoppers) watching SURVIVOR on television.

SPEAKING OF SURVIVOR : A REALITY TV SHOW FOR CHILDREN’S AUTHORS

I love reality TV. The other day I was discussing a current reality show with a friend who has worked in the field of children’s books for many years. She wistfully said, “I just wish we could find some way to use such reality shows to launch new children's book creators!”

Okay, let’s give them a chance. They can try out for...well, let’s call it PROJECT NEWBERY or FINDING THE NEW SEUSS or WRITE ON! or ROWLING FOR DOLLARS.

Obviously it wouldn’t be a major network "American Idol" type of show, but more of a niche series on a network farther up the cable dial, like A&E or Bravo. You get ten or twelve aspiring children's writers and find some cool, funny, quick-witted children’s book person to host the show (paging Jon Scieszka and Lane Smith) and a panel of judges. Maybe one judge is a supportive fellow children’s author. Another is a ruthless agent. The third is a nasty editor (I can offer a list.)

And of course the weekly writing assignments would have to be humorous and entertaining:

1) Each contestant is given a dog to take care of for a day. Hilarity ensues. Then they have to write a story about the dog.

2) Each contestant has to attend a modern high school for a day. Hilarity ensues. Then they have to write a fictional story using what they learned about high school life.

3) A 24-hour write-off in which each contestant has to write a 100 page children's book in one day. Hilarity ensues as contestants yawn and fall out of their chairs while writing.

The viewers see each contestant reading parts of their stories out loud to the judges (of course the film editors would include REALLY bad sections so they can show the judges wincing, as well as really good sections which make the judges nod and smile.) All the complete stories would be included on the show's website so viewers at home could read the whole texts.

At the end of each show the judges praise the best stories, criticize the worst and someone is handed a "rejection slip" and, in a nod to children’s book character Philip Hall, told to “Get on out of here.”

The final contestant standing gets a publishing contract and the series is timed so the winning book is available the week after the show ends. Because of the TV exposure, the book becomes a bestseller.

(But then I even watched YOUR MAMA DON’T DANCE.)

A NEW BESTSELLER IS FOUND

I continue to be amazed at the imagination of Margaret Peterson Haddix, who creates the most mind-blogging plots in children’s books. We don’t usually see Ms. Haddix’s name on lists of famous or bestselling writers, but many kids will tell you she’s one of their favorites authors and her “Shadow Children” series has sold in the millions.

Now she’s back with FOUND: 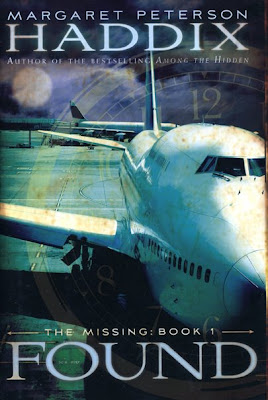 The prologue opens with first-day airline employee Angela DuPre working the busy ticket counter at an airport gate. She glances out the plate glass window at the runway lights in the distance and suddenly the lights are blocked by an airplane rolling into the terminal. Yet the control tower says no plane has landed.

Angela walks down the ramp and steps onto the plane, but sees no one inside. Then she looks down at the passenger seats and discovers that each seat holds....

Well, you’ll have to read the book to find out what happens next. I can almost guarantee you won’t be able to stop after reading that prologue.

And with the author’s history of bestsellers, I suspect a first edition of this book could become collectable.

When I was a kid, we had to go to school for a half day on Memorial Day. Around eleven a.m. all the classes would gather in the gym for a program. First we’d sing the national anthem, then someone would read the poem “In Flanders Fields.” Back then it seemed like the poem went on forever. I guess it seemed that way because we were all so anxious to get out of school early and race home to picnics and swimming pools (Memorial Day usually marked the first “swimming day” of the year.) Just now I looked up the poem and was amazed by how short -- and how meaningful -- it actually is. I'm including it here today for all those Memorial Days at school when we should have listened to the words, but didn't.

In Flanders Fields the poppies blow
Between the crosses row on row,
That mark our place; and in the sky
The larks, still bravely singing, fly
Scarce heard amid the guns below.

We are the Dead. Short days ago
We lived, felt dawn, saw sunset glow,
Loved and were loved, and now we lie
In Flanders fields.

Take up our quarrel with the foe:
To you from failing hands we throw
The torch; be yours to hold it high.
If ye break faith with us who die
We shall not sleep, though poppies grow
In Flanders fields.

After the poem, someone would play taps and we were instructed to quietly, quietly walk out of the gym without a word. No racing, no pushing, no laughing, no talking -- almost impossible demands for a group of several hundred restless grade-schoolers. There’d be an occasional whisper or laugh from a kid, quickly followed by a teacher’s “Shh!”

And then dead silence.

I can still remember the eerie, almost unnatural quiet broken only by the sounds of our footsteps on the hardwood floors as we walked away faster and faster -- finding it impossible to remain so sad, so serious, so deathly silent when summer waited on the other side of the gymnasium doors.
Posted by Peter D. Sieruta at 4:43 PM

Did you see the episode of Martha Stewart: the Apprentice where the two teams vied for the chance to publish a book with Anne Schwartz at Random House? Really! (http://www.publishersweekly.com/eNewsletter/CA6259047/2788.html)

Thanks for Flanders Field--I'd heard the title before but had never read the poem. And I appreciated your framing afterwards. It gave me a shiver!
alb

Hi Monica. I had forgotten about that episode of the Martha's Apprentice, but it's coming back to me now. I think the main difference between that show and what I'm proposing is that Martha's contestants weren't really writers, so the best manuscript of a bad lot was chosen by Anne Schwartz. My idea is more like Top Chef or Project Runway, where people who have already demonstrated some talent as writers are eligible to get their "big break" by appearing on the show. Some people probably think it's a silly idea, but who would have thought a cooking or dressmaking competition come become hits! Thanks for reading! Peter

Thanks, as always, for you kind comments. Glad you read the blog! Peter