She Even Called Me "Mr."

Some kids have favorite baseball teams or favorite singers. I had a favorite publisher.

Visiting the library as a child, I constantly checked out books by E.L. Konigsburg and Zilpha Keatley Snyder -- and at some point realized that all their titles were published by Atheneum. After a while I began to associate the name "Atheneum" with "quality." It was like the Good Housekeeping Seal of Approval for children's books. I became a "brand snob," seeking out other volumes from this publisher and discovering new favorites by authors such as Sylvia Louise Engdahl, Barbara Corcoran, William D. Hayes, Barbara Wersba, and Peter Zachary Cohen. Maia Wojciechowska published her first children's novel, SHADOW OF A BULL, with Atheneum, won the Newbery, then soon moved on to greener pastures. Conversely, two-time Newbery winner Joseph Krumgold left Crowell and came to Atheneum to publish his third and final children's novel, HENRY 3.

I loved most of these books but often wished I could have my own copies rather than keep carting them back and forth to the library in my newspaper-route saddle bags. But Atheneum books were never reprinted in paperback then -- and I certainly couldn't afford to buy hardcovers.

Then one day I went to the B. Dalton bookstore and saw a copy of E.L. Konigsburg's JENNIFER, HECATE, MACBETH, WILLIAM MCKINLEY AND ME, ELIZABETH on the paperback shelf. It turned out to be the very first book that Atheneum was publishing in their new paperback line, Aladdin Books. I quickly looked through the shelves and found another, Wojciechowska's SHADOW OF A BULL with a blood-red cover. I'd finally found copies of these books I could afford...copies I could put on my shelves and take down to look at or read any time I felt like it. I wanted to thank someone!

I decided to write Atheneum Itself. Using my father's old manual typewriter and both index fingers, I typed a "To Whom It May Concern" thank you note to the publisher, saying how happy I was that they were now publishing books I could afford. I even included a "wish list" of other Atheneum titles I wanted to see in paperback.

A couple weeks later I opened the mailbox and found an envelope from Atheneum:

And inside was not just a form reply, but an actual letter from Jean Karl, the famous editor who had started the children's department at Atheneum, discovered and guided the careers of so many famous authors, and had edited dozens of my favorite books. (If you click on the image, the letter will enlarge so you can read it better.) 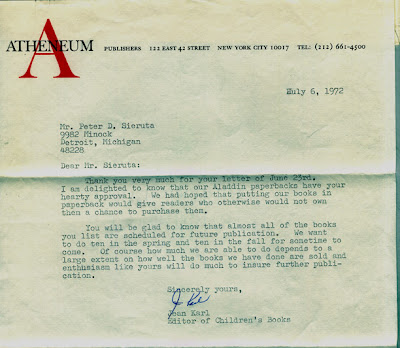 I was under no illusions that my original letter looked like it came from an adult -- not with all of its strike-overs and inky fingerprint marks (some of the keys on that manual typewriter stuck and always had to be pried off the ribbon), not to mention the bad grammar and misspelled words (hey, YOU try spelling Wojciechowska correctly!) -- so I was thrilled that Ms. Karl responded in such an adult, nonpatronizing way. She even called me "Mr." It wasn't until years later that I realized this was probably one of the reasons she was such a great editor: she didn't look down on kids, but treated them with respect.

In the coming seasons, I continued to purchase as many Aladdin books as my paper route money would allow: the long-awaited paperback publication of FROM THE MIXED-UP FILES OF MRS. BASIL E. FRANKWEILER; a true story about young test pilots called LET X BE EXCITEMENT by Christie Harris; Robert C. O'Brien's eccentric first novel, THE SILVER CROWN. Nearly forty years have passed since those first books were released. Aladdin continues to thrive as a paperback publisher. I'd like to think my early "hearty support" and "enthusiasm" had something to do with it, but who'd believe that? I guess the person we should thank today is the same person I thanked in 1972: Jean Karl -- the editor who published so many great books at Atheneum, who created the Aladdin paperback line, and even called thirteen-year-old boys from the midwest "Mr."
Posted by Peter D. Sieruta at 11:09 AM

What a cool story and letter. I cant believe an editor such as Jean Karl took the time out of her busy schedule to write a young reader. I would like to believe that if you wrote a publisher today that you'd get a personal letter back, but somehow I doubt it, sad days. Seems there was more appreciation for the readers young and old them, but like you say, that is what probably made her such a great editor. Thanks again for another great story!