A couple months ago, I happened to catch an interesting B movie on television. Produced in 1945, THE VOICE OF THE WHISTLER is an hour-long atmospheric thriller about an over-worked executive who goes to a remote Lake Michigan village to regain his health. There he meets a friendly cab driver who, during conversation, reminds him to stop and smell the flowers "like Ferdinand the Bull." I was really surprised to hear a reference to a children's book character in this old film and can't imagine that kind of thing happening too often today.

But then again, THE STORY OF FERDINAND, which was written by Munro Leaf and illustrated by Robert Lawson, was a very famous book. 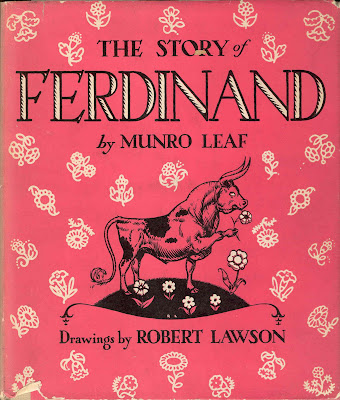 Munro Leaf wrote the story in less than hour -- about the same length of time it took Jenna Bush to write her current bestseller READ ALL ABOUT IT! The only difference is that...oh yeah, Munro Leaf had talent. Leaf specifically wrote the text for Robert Lawson to illustrate and the interplay between the words and pictures of these two brilliant creators is nothing short of perfection. 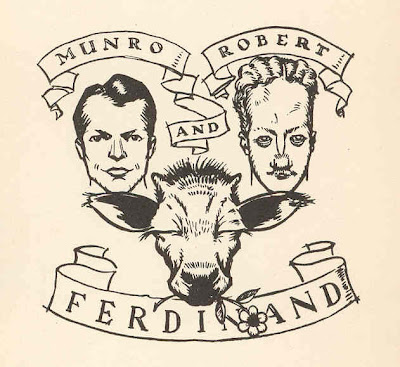 It's hard to believe that this gentle, humorous story of a bull who "liked to sit just quietly and smell the flowers" could ever be considered controversial, yet FERDINAND was banned in Spain (some thought the book supported General Francisco Franco, others thought it denounced him) and was ordered burned by Hitler. Conversely, it was cited as a favorite book by Gandhi and Franklin Roosevelt.

But kids just liked it because it was good story, wonderfully told and illustrated.

Never out of print, THE STORY OF FERDINAND has cast a long shadow across our culture. It was made into a Disney cartoon in 1938 -- and won an Academy Award. You can watch the entire cartoon on Youtube. And while there you might as well watch the clip from a 1958 Lawrence Welk Show which features a song about Ferdinand, a dancing bull, and Janet Lennon dressed as a matador. Speaking of music, the rock band Fall Out Boy named their 2005 recording FROM UNDER THE CORK TREE in honor of Ferdinand's favorite resting spot and the late musician Elliott Smith had a tattoo of Ferdinand on his arm, which is displayed on the cover of his 1997 release EITHER/OR. If you visit Ebay, you can find Ferdinand toys, posters, cookie jars, planters, creamers, and Beanie-babies.

But you probably won't find a first edition of this classic picture book.

According to Anita Silvey's indispensable volume, 100 BEST BOOKS FOR CHILDREN, only 1500 copies of THE STORY OF FERDINAND appeared in 1936. (Two years later FERDINAND was outselling GONE WITH THE WIND.) I know where one of those 1500 first editions is -- on the shelf in the Ramsey Room. But wouldn't it be nice to know where the other 1499 copies are? Many went to libraries where they were probably read-to-pieces. Hitler burned a few. Those that found their way into people's homes have probably been passed down through families over the decades. But I'm sure that one or two are still out there waiting to be found...maybe at an estate sale...or tucked away in some dusty corner of a used bookstore...or perhaps sitting in a Goodwill pick-up box with a bunch of old clothes and scratched lp records. Maybe you or I will come across a copy one of these days. Hey, it's something to daydream about the next time we're just sitting around, relaxing under the shade of a cork tree smelling the flowers.

THE STORY OF FERDINAND
Written by Munro Leaf; illustrated by Robert Lawson.
Published by Viking in 1936.

The cardboard covers are printed with flowers and a vignette of Ferdinand with a flower in his mouth. The spine is bound in tan cloth featuring only the word "FERDINAND," not the entire title. Below that is printed "LEAF and LAWSON" with the first two words sitting on top of Lawson's name. Farther down the spine it says VIKING. Four flowers also appear on the spine.

The date Mcmxxxvi is printed on the title page with "First published September 1936" on the verso.

The dustjacket has a price of $1.00 on the top of the front flap and the numbers 4100 on the bottom. The backflap also includes the $1.00 price plus the caricature of the two creators and Ferdinad which is shown above.

I have seen estimates for a first edition ranging in price from $3000 to $5000, but I suspect this rare book might actually sell for much more than that -- no bull!
Posted by Peter D. Sieruta at 11:04 AM

I just stumbled across your lovely blog and am enjoying it tremendously.
Ferdinand is such a special book. I moved to a new school in Grade 4 and this was one of the first books that the school librarian read to us that year. I was thrilled to still be able to buy a copy for my own son and I hope he loves it as much as I do.
Thanks for sharing your knowledge with us! Off to youtube now to see the film...

Hi - great blog - just read your piece about Ferdinand - you don't happen to know where I can but a first edition - I will pay above estimate for it? My email is tom.hunt@clarioncomms.com

Nice bit of background info. Btw, the Lennon sisters' song must be much older than they are: I remember my granddad singing a dutch version of this song, that he made for a cabaret night in the camps during WW2.

I have a First Edition Copy of the book Ferdinand!?! I found your blog because I just picked this book up at Goodwill (ironic, HUH?, lol) along with a bunch of other books for my family & I to read and thought WOW 1936 book, wonder if it's worth anything? Who knew....?! How exciting! I love your blog the information is great and it made my day! To say the least :)