Look! Look what I found in the room where I work!

...I can't. I had intended to write this entire blog entry in one-syllable words, but it's just too difficult. I guess I could never have written any of the nineteenth century volumes I'll be discussing today -- each presented entirely in single syllables.

A quick trip through the Ramsey Room stacks turned up nearly a dozen examples of this genre including adaptations of classics, animal stories, and biographies.

ROBINSON CRUSOE IN WORDS OF ONE SYLLABLE by Mary Godolphin (McLoughlin Brothers, 1869) bills itself as the first book of its kind: "...it is believed that the idea and scope of its construction are entirely novel, for the One Syllable literature of the present day furnishes little more than a few short, unconnected sentences, and those chiefly in spelling books." 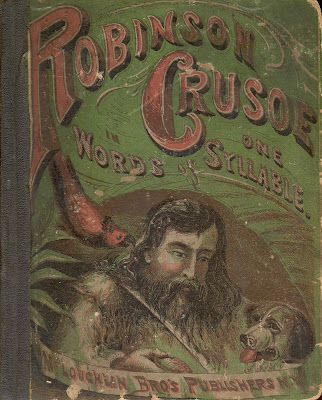 The book, which severely abridges the Defoe classic, begins: "I was born at York on the first of March in the sixth year of the reign of King Charles the First. From time to time when I was quite a young child, I had felt a great wish to spend my life at sea, and as I grew, so did this taste grow more and more strong; till at last I broke loose from my school and home, and found my way on foot to Hull, where I soon got a place on board a ship."

Although those two sentences zip through several pages of the orignal text -- pages that included words like "expostulated" and "vicissitudes" -- they provide a nice tight opening for the novel, telling us a bit about the protagonist, his desires, and how he sets off to achieve them. Reading page after page of herky-jerky- one-syllable prose may be akin to reading a telegram, but now and then you come to a line or two that seem downright poetic -- such as the volume's conclusion: "And now I must bring this tale of my life to a close, while at the age of three score and twelve, I feel that the day is at hand when I shall go forth on that sea of peace and love which has no waves or shores but those of bliss that knows no end."

ROBINSON CRUSOE IN WORDS OF ONE SYLLABLE exempted proper names from the single-syllable convention -- a precedent followed by all later volumes of the genre. This was a good policy and prevented a book such as PILGRIM'S PROGRESS from being reduced to PILL'S PROG or GRIM'S 'GRESS when it was published here in 1895: 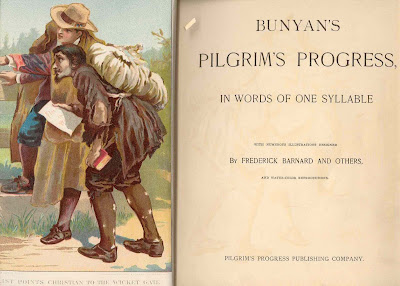 This copy was issued by the "Pilgrim's Progress Publishing Company" (boy, they must have pubished a wide variety of books) but I suspect some monkey business was involved because the exact same text (here attributed to no one) was first published by McLoughlin Brothers in 1884 with Mary Godolphin listed as author. Many years later, Viking editor Helen Dean Fish found a copy of the McLoughlin edition on the bookshelves of Mr. and Mrs. Robert Lawson and decided she'd rewrite it as a picture book for Robert Lawson to illustrate. But Fish soon realized that Godolphin "had done an almost perfect job and it was decided to use her text exactly as it stood" for this 1939 Viking edition: 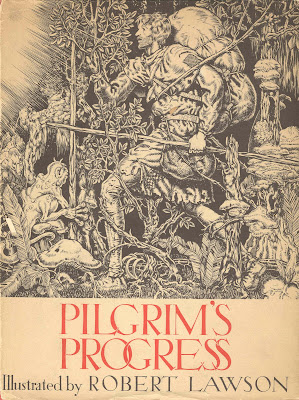 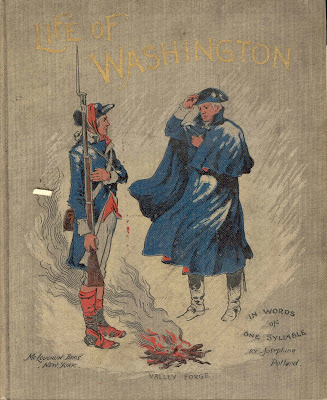 I hate to say this about books that honor men of integrity and honesty like Lincoln and Washington (Pollard even repeats the cherry tree story in her biography) but both authors find ways around the one-syllable rule, occasionally using multi-syllable words broken up by hyphens (broth-er, a-fraid, writ-ing a let-ter.) Hmm...I think Har-ri-et Put-nam and Jos-eph-ine Pol-lard are cheat-ers.

After looking at these one-syllable books today, I realized why this children's book trend of the late nineteenth-century never really caught on. The texts lack rhythm and variety, despite an occasional line that sings. SANDFORD AND MERTON IN WORDS OF ONE SYLLABLE by (who else?) Mary Godolphin and published by James Miller in 1874 does include one line that I can't get out of my head: "To this pond Dash made a rush." 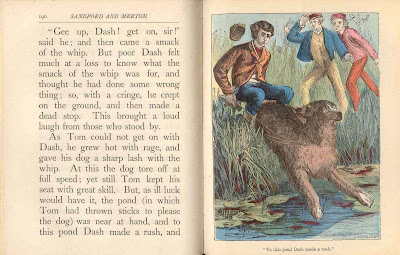 But in general, reading these books aloud is a choppy and robotic experience. Even beginning readers were probably bored by their general atonality -- plus many of these volumes are well over two hundred pages, which must have seemed daunting to one-syllable kids. And while these books don't even seem to be in demand by modern collectors (most are available at extremely modest prices) they do represent an unusual experiment in historical children's publishing.

Or, as Mary Godolphin might have phrased it: "An odd fad in past kid books."
Posted by Peter D. Sieruta at 3:47 PM

Thanks for the tale of "in words of one syllable". It is hard to do!