I’ve always loved October: the cooler weather...the colorful trees...my birthday...and then, of course, Halloween on the very last day of the month. When I was a kid, we spent the entire month planning and preparing for the big night. What made it special, of course, is that Halloween night only came once a year. And it lasted such a short time. Starting at twilight on October 31, there were only a couple hours before all the porch lights went out and we were back home, pawing through the treats in our pillow cases and desperately trying to trade our yucky Banana Chews for something cool like a Snickers or Hershey bar.

I realized this last Saturday (last Saturday -- a full week before Halloween!) when I saw kids in costume trooping from barber shop to restaurant to drugstore, getting candy from local businesses. Later in the week I heard about something called “Trick or Trunk,” held in a church parking lot, which allowed kids to go from car to car to pick up treats. And then yesterday afternoon I was at the grocery store and they had little stations set up all around the store where costumed kids could get treats. By this count alone, some kids could have gone trick-or-treating three times before the big night rolled around. And who knows how many other T-or-T opportunities were out there that I didn’t know about?

Incidentally, the grocery store event was irritating. They had big signs on the front doors that said, “PLEASE REMOVE YOUR MASK BEFORE ENTERING” -- I guess as a security precaution.

I’d barely walked through the doors before a manager said, “Sir, please take off your mask.”

I took a shopping cart and made it to the end of the aisle before a woman behind the deli counter called out, “We’re not allowing masks in the store.”

I went down one of the aisles and a stock-girl said, “No masks in the store.”

She winced, then tried to to make up for it. “Well, I like your costume. It’s very funny.”

“Thanks,” I said, “but I’m not wearing a costume. These are my regular clothes.”

That does it. Next year I’m just going to stay home all day on Halloween and eat “fun-size” Kit-Kats and Butterfingers.

Today’s the first day of November and I just came across the perfect book for the season: 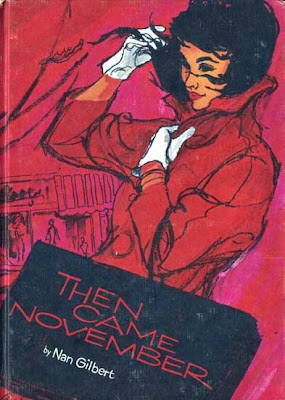 I found it for a dollar.

Written by Nan Gilbert and released in 1963, THEN CAME NOVEMBER strikes me as an oddity. For one thing, it was issued by Whitman Books, best known for publishing TV tie-ins or series books. I wasn’t aware they published stand-alone novels at all. Nor did I know that their readership included young adults. Yet this book is labeled “A Teen Novel” at the top of the spine and the plot summary sounds darker than the average Whitman book, describing a high schooler who gets in with a cool crowd -- in crowd known for their “short skirts, bright clothes, charge accounts” -- as well as a sportscar called the Pussycat! “For Dulcy there would never be another October like this one! She was riding high and no one, but no one could stop her ascent. ...Then came November.”

I’m also intrigued by the format of the book. It resembles the typical Whitman volume -- cheap cardboard cover, no dustjacket, low-quality yellow pages -- the kind of book that, as someone once mentioned on this blog, used to be sold in the toy department at dime stores. Yet it strives to resemble a higher-quality trade volume, with the plot description printed on a faux-”flap” inside the front cover: 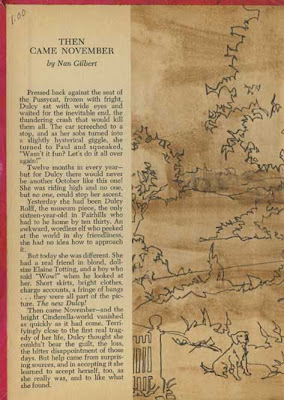 and an author bio inside the back cover: 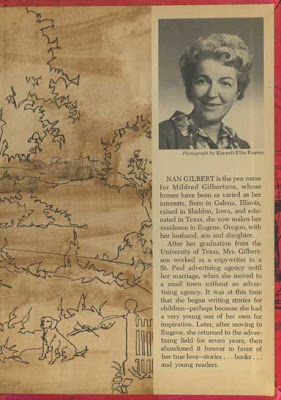 I’ve never really seen anything like this before. As for the quality of the novel, I can’t comment. I just got this book and, considering the huge pile of books in my “to-be-read” pile, I may not get to this one until “Then Came November 2010.”

Blog-reader Sarah-with-an-H wrote to ask, “Could you explain the difference between a Printz Honor book and a Printz Award book? Does one simply mean it won, and the other mean it was nominated?”

To answer the question, every year many titles are nominated for the Printz Award, which is given to that year’s best young adult book. According to the rules of the award, “’best’” is defined solely in terms of literary merit.” Titles are nominated by members of the committee as well as “from the field” -- although authors and editors are not permitted to nominate their own books. Titles with “field nominations” must be seconded by committee members.

The winning book is selected by a weighted vote. According to the ALA website, this means “To win, a title must receive five first place votes and must also receive at least five more points than the second place title.”

After the Printz Award book is chosen, the committee can then go back and select up to four Honor Books from the list of nominated titles. A weighted ballot is used to choose these as well.

So...out of many nominated titles comes ONE Printz Award winner. After that title is chosen, up to four other titles can be chosen as Honor Books.

Unlike the Newbery Medal, which must be given to either a U.S. citizen or a writer who resides in the United States, the Printz Award is international in scope. Melina Marchetta, the author of this year’s winner, JELLICOE ROAD, is Australian -- as is Margo Lanagan, who wrote the Honor Book TENDER MORSELS; Terry Pratchett, who received an Honor for NATION, is from Great Britain.

In the ten years of this award’s existence, a wide variety of authors have been honored. Some have already merited recognition twice. They are:

The Printz is still a comparatively new award; it will be interesting to see how many of these “double-dippers” continue to be honored in future years. Who will end up having a record-number of Printz Awards and Honor Books?

I was honored and delighted to learn that Collecting Children’s Books was included in the article This Blog's for You: Ten of the best blogs for folks who take kids' lit seriously (but not too seriously). One correction -- I’m not a librarian (I just play one on the web...and have worked in libraries for 30-plus years) but I’m tremendously pleased to be mentioned among such fine company in this article by the Queen Bee of children’s book blogging, Elizabeth Bird.

Today is the first day of National Novel Writing Month. You can find out more about it here. Can you write a 175 page novel between November 1 and November 30? Hmm...good length for a children’s book...isn’t it?

Sorry for the brevity of today’s blog, but I’ve been working on another project all week and got a little behind in blogging. Hope you’ll be back!
Posted by Peter D. Sieruta at 4:08 PM

Wow. I really want to read And Then Came November now. Miniskirts in 1963? How utterly daring. It is an odd title for Whitman, though; you're right.

I was big fan of whitman novels and have been looking for that book. I have several of them at local booksales, but never that one. I truly enjoyed all those teen novel books back then. I think they cost about 50 cents.

"Then Came November" is my absolute favorite of the Whitman Teen Novels, which I used to collect in college (coincidentally, I lived about 10 blocks from where the author photo was taken in Eugene, OR). It has a depth and, yes, a dark quality to it that none of the others have. Odd words to apply to something from Whitman, I know, but true. I've read it quite a few times. Hope you enjoy it.

I have noticed that you are a hardworking person, indeed. However, Although I haven't heard about theses pieces of work, then I think it worths to be read.