I’ve been busy working on another project...so Sunday Brunch is a little late today. In fact, it’s being served by moonlight. Today’s entry counts Caldecotts, reviews a new book, and reports on the shunning of Pooh’s friend Piglet.

Ever since H1N1 hit the scene, a number of cartoons utilizing children’s book characters have hit the web. There’s this take-off on A.A. Milne: 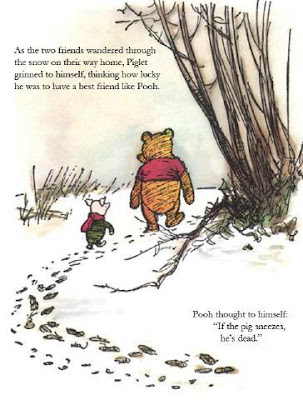 as well as this one: 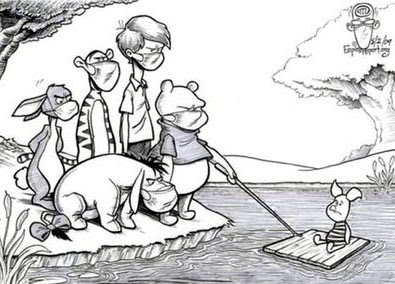 What’s next -- a cartoon of Wilbur in his pen with the web above him spelling out, “Get Your Flu Shot”?

Did you hear about Willow? This twelve-year-old mixed-breed has been in the news recently demonstrating her uncanny ability to “read.” When her trainer holds up a sign that says “BANG,” Willow plays dead. “SIT UP”causes her to rise up on her haunches and beg. Many experts question whether Willow can actually read words. Some say she reacts to the general shape of the words on the page, or takes cues from her trainer’s body language. What impressed me the most was this picture of Willow with a stack of books. 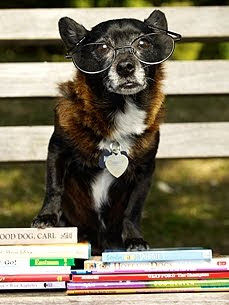 There’s no denying, Willow has good taste in books. If you squint your eyes and get very close to the computer screen, you may recognize most of the volumes as canine-related children’s books. I can’t quite see them all, but I can make out GO, DOG, GO by P.D. Eastman, BECAUSE OF WINN-DIXIE by Kate DiCamillo, HOTEL FOR DOGS by Lois Duncan, and GOOD DOG CARL by Alexandra Day.

Last Sunday I created a list of all the multiple Newbery winners. This week I thought I’d do the same for the Caldecotts. Last week’s list showed that no author had won a total of more than five Newbery Medals and Honor Books. Things are very different in the Land of Caldecott, where we’ve got a six-time honoree, an eight-time honoree and even someone with a combined total of NINE Caldecott Awards and Honor Books. Can you guess who that person is? Hint: it’s not Sendak.

Ludwig Bemelmans won in 1954 for MADELINE’S RESCUE and had an Honor Book in 1940 for the original MADELINE.

Virginia Lee Burton had one Caldecott winner (THE LITTLE HOUSE, 1943) and one Honor Book (SONG OF ROBIN HOOD, 1948.)

Donald Crews received a Caldecott Honor for FREIGHT TRAIN (1979) and another for TRUCK (1981.)

James Daugherty had two Honors: ANDY AND THE LION in 1939 and GILLESPIE AND THE GUARDS (1956.)

Marguerite De Angeli had a pair of Caldecott Honors: YONIE WONDERNOSE (1945) and BOOK OF NURSERY AND MOTHER GOOSE RHYMES (1955.)

Leo and Diane Dillion struck Caldecott gold two years in a row with WHY MOSQUITOES BUZZ IN PEOPLE’S EARS (1976) and ASHANTI TO ZULU (1977.)

Roger Duvoisin won the 1948 Caldecott with WHITE SNOW, BRIGHT SNOW and had a 1966 Honor with HIDE AND SEEK FOG.Ed Emberley has had one winner (DRUMMER HOFF, 1968) and one Honor (ONE WIDE RIVER TO CROSS (1967.)

Wanda Gag (who had two Newbery Honor) also received two Caldecott Honors: SNOW WHITE AND THE SEVEN DWARVES (1939) and NOTHING AT ALL (1942.)

Paul Galdone’s illustrations for the Anatole stories were recognized in 1957 (ANATOLE) and 1958 (ANATOLE AND THE CAT.)

Margaret Bloy Graham had back-to-back Honors with ALL FALLING DOWN (1952) and THE STORM BOOK (1953.)

Elizabeth Orton Jones won for PRAYER FOR A CHILD (1945) and had an Honor Book, SMALL RAIN, the previous year.

Maud and Miska Petersham received the 1946 for THE ROOSTER CROWS and had a 1942 Honor Book with AN AMERICAN ABC.

Alice and Martin Provensen won with 1984’s THE GLORIOUS FLIGHT and had an Honor for A VISIT TO WILLIAM BLAKE’S INN (1982.)

Allen Say won the 1994 Caldecott for GRANDFATHER’S JOURNEY and had a 1989 HONOR with BOY OF THE THREE-YEAR NAP.

Brian Selznick won for THE INVENTION OF HUGO CABRET (2008) and Honored with THE DINOSAURS OF WASTERHOUSE HAWKINS (2002.)

John Steptoe had a pair of Honors with THE STORY OF JUMPING MOUSE (1985) and MUFARO’S BEAUTIFUL DAUGHTERS (1988.)

Simms Taback won for JOSEPH HAD A LITTLE OVERCOAT (2000) and Honored with THERE WAS AN OLD LADY WHO SWALLOWED A FLY (1998.)

Lynd Ward won in 1953 with THE BIGGEST BEAR and had an Honor in 1950 with AMERICA’S ETHAN ALLEN.

Hildegard Woodward had Honors in 1948 (ROGER AND THE FOX) and 1950 (THE WILD BIRTHDAY CAKE.

Leonard Weisgard won in 1947 for THE LITTLE ISLAND and also had an Honor Book that year with RAIN DROP SPLASH. In 1946 he illustrated the Honor LITTLE LOST LAMB.

Margot Zemach won the 1974 Medal for DUFFY AND THE DEVIL and had Honors in 1970 for THE JUDGE and in 1978 for IT COULD ALWAYS BE WORSE.

Uri Shulevitz won the 1969 Caldecott for THE FOOL OF THE WORLD AND THE FLYING SHIP and also had three subsequent Honors. They are THE TREASUR (1980), SNOW (1999) and HOW I LEARNED GEOGRAPHY (2009.)

JUST ONCE UPON A TIME

Considering how many people were honored multiple times, I was curious to see which illustrators received the Caldecott just once and never received any other recognition from the committee -- no winners or Honors -- for the rest of their career. They are: 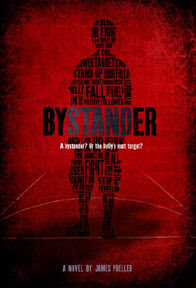 “drawn to Griffin, the way a caveman might be drawn to fire.” Hanging around the edges of Griff’s clique, Eric silently, even smilingly, watches his new friend’s Eddie Haskell act around grown-ups as well as his continual harrassment of a fellow student. When Eric eventually speaks up about the bullying, he suddenly becomes Griffin’s new prey. James Preller has written a fast-moving, accessible story about an everyday kid confronting a satisfyingly-complex villian. Occasionally the story seems overly purposeful -- especially when an entire class period (and and entire chapter) is spent explaining the issue of bullying (“Mr. Floyd said there were four types of bullying: verbal, physical, intimidation, and indirect bullying.”) And some of Eric’s insights are too adult (and too pop-psych) to be believable, as when he realizes that his mentally ill father is “like two men, the good guy and the sick one. For Eric to ever live a full life he would have to love both men.” The story is at its best when it sticks to Eric’s seventh-grade perspective, complete with artlessly perfect metaphors (“A long row of yellow school buses, like a line of enormous Twinkies, idled along the right side of the parking lot.”), a sense of emotional immediacy, and a realistically triumphant ending.

In the book collecting world, people are always concerned about condition. Wear, nicks, and chips on dustjackets are always noted and, if bad enough, are sometimes a “deal breaker” when it comes to selling a book. I am not excessively picky about such things myself -- especially when a book is over forty or fifty years old. Nothing gets that old (and I count myself among that category) without a few battle scars. But what do you say about a book that’s only a week old and looks like it’s already been through a war? I’m talking about the aforementioned BYSTANDER. I just bought the book a week ago and only read it once -- and I was certainly careful with the volume. Yet look at the folds on the dustjacket:

I’m not sure if the photograph captures it very well, but both the folds on the fore-edge of the book are so cracked that the color has flecked off from top to bottom. In fact, the edges are now so rough and worn that it wouldn’t take much for the front and back flaps of the dustjacket to tear off and completely separate from the book. I’ve never seen something like this happen to a brand new book that’s only been read once. Did the publisher use subpar paper? Is the dustjacket coated with some kind of inferior paper treatment? Did I just get a bum copy? Whatever the case, it’s worth noting for future reference. If you purchase a copy for your home or library, you might want to slip a mylar cover over the jacket before reading.

Thanks for visiting Collecting Children’s Books. Hope you’ll be back!
Posted by Peter D. Sieruta at 2:10 AM

Is it horrible that I laughed at the cartoons? Poor poor Piglet. He can sneeze on me.

I think you did a very good and useful job on the Caldecott winners data. In your spare time, you might want to do data analysis. Bill

jajajajaj take that you Piglet, you little infectious subject, well maybe I'm exaggerating my feelings, we have to take into account how many people has suffered for this terrible disease.