Beginning a new job is a bit like starting to read a novel by jumping right into the middle of the book.

Suddenly you're in the midst of a scene and you have no idea who is who or what is what. You don't know the characters, you don't know the plot, and your head starts spinning just trying to keep up.

That's how I felt when I started my current job nearly twenty years ago. Everyone in the library knew each other and shared a history of sorts. As a newbie and outsider, I listened to their memories of a beloved former director who would hire anyone who personally requested a job in the library. I heard them talk about the former employee who was arrested on the job and taken out of the building in handcuffs. Names of old co-workers were tossed around. Miss So-and-So was exacting and precise. Mr. So-and-So was fun and down-to-earth. I also heard a lot about a woman named Connie who was in charge of one of the library departments.

The names didn't mean much; I was still trying to learn the details of the job. One day, while discussing the books in the juvenile collection, a co-worker said, "And of course every year we order the latest Newbery winners..."

(I smiled. Newbery -- at last I was hearing a familiar name!)

(Another smile. Another familiar name.)

(I continued to smile, but it was a fake smile -- as I had never heard of a "Black Award." Did my co-worker mean the Coretta Scott King Awards, which are given to African American children's book creators? I was confused.)

Over the next few months, I would occasionally hear other references to the Black Awards. Finally, I had to ask: "Do you mean the Coretta Scott K--"

"No," my co-worker interrupted. "The Irma Simonton Black Awards."

That threw me. I thought I knew a lot about children's books, but this was one award I didn't know. Of course I immediately started doing some research.

The Irma Simonton Black Award was named after an educator and author who was a founding member of the Bank Street Writers Laboratory, famous as the training ground for writers such as Margaret Wise Brown. Mrs. Black was affiliated with Bank Street for her entire professional life -- as a nursery school teacher, a teacher of children's literature, and director of publications and communications. She also wrote a variety of books aimed at parents and professionals (OFF TO A GOOD START : A HANDBOOK FOR MODERN PARENTS, 1946) as well as many picture books for young readers, including HAMLET : A COCKER SPANIEL, 1938; THE TROUBLEMAKER, 1959, and THE OLD MAN WHO COOKED AND CLEANED, 1970. 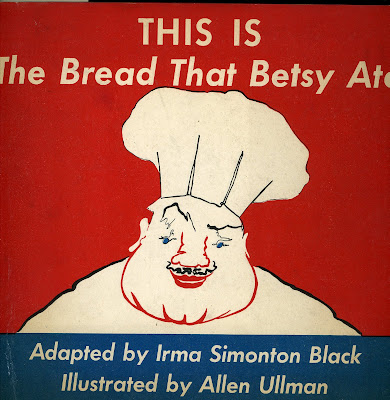 Researching the Irma Simonton Black Award, I learned that many luminaries of the children's book world had received this honor, including William Steig, Chris Van Allsburg, and Jerry Pinkney. I guess the main reason I'd never noticed the award is that it honors picture books -- and that's never been my top area of interest. Still, it seems a worthy award for many reasons. Over the years, a lot people have complained that the Newbery Medal seldom recognizes picture book texts. Others complain that some of the Caldecott winners are beautifully-illustrated but have weak texts. The Black Award offers an alternative solution. According to the Bank Street's website, the award honors "a book in which text and illustrations are inseparable, each enhancing and enlarging on the other to produce a singular whole." And children have a hand in determining the winner. An initial list of twenty to twenty-five nominees are selected by an adult committee. Students at the Bank Street School for Children narrow the titles down to four finalists, which are then sent to a number of different schools and libraries at which kids choose the winner. According to the Bank Street site, one recent winner was selected by 2500 students at schools in five different states.

A couple years after researching this award, we got our copy of the latest winner at the library. While cataloging it, I told one of my co-workers what I had learned about the Irma Simonton Black Award. She nodded and said, "Yeah, I remember hearing some of that stuff before."

"From where?" I asked, because -- egotistical as I am about kid-book knowledge -- I could hardly believe she knew something about children's literature before me.

"I think Connie told me about it."

"Connie, our old boss. Oh, didn't I tell you that Irma Simonton Black was Connie's mother?"

A few years went by, and one day I happened upon a biographical entry for Mrs. Black in a reference book. She was born in 1906 and died in 1972. But what caught my eye was the cause of death: "died of stab wounds."

I ran to my co-worker's desk and gasped, "Did you know that Connie's mom" (because by then I thought of her as "Connie's mom" even though I'd never met Connie in my life) "died of stab wounds???"

"Yeah, I think I remember that," she replied in a dull voice, then returned to her work.

People can be awfully blasé, can't they? I mean, if I had a co-worker whose mother was a famous writer...and had an award named after her...and died of stab wounds, I'd be talking about it all the time. It would be a story I pulled out at every cocktail party I attended -- if I ever attended cocktail parties. But that's just me. Other people don't feel the need to live their lives basking in the shadow of celebrity.

As it turns out, Mrs. Black was stabbed to death in her Greenwich village home in what is still an unsolved murder. Out of this tragedy, her family established the Irma Simonton Black Award in her honor. Beginning in 1992, the name of the prize was changed to The Irma Simonton Black and James H. Black Award for Excellence in Children's Literature in order to also recognize Irma's husband. ...Or, as I now think of him, "Connie's dad."

Here is the list of all the winning books:

1973 / BEAR MOUSE by Bernice Freschet, illustrated by Donald Carrick; HARLEQUEN AND THE GIFT OF MANY COLORS by Remy Charlip and Burton Supree

1974 / SHE COME BRINGING ME THAT LITTLE BABY GIRL by Eloise Greenfield, illustrated by John Steptoe

1975 / MORRIS'S DISAPPEARING BAG by Rosemary Wells; THE MAGGIE B. by Irene Hass

1976 / THE EASTER EGG ARTITS by Adrienne Adams; EVERYONE KNOWS WHAT A DRAGON LOOKS LIKE by Jay Williams, illustrated by Mercer Mayer

1977 / THE MYSTERIOUS TADPOLE by Steven Kellogg

1978 / FELIX IN THE ATTIC by Larry Bograd, illustrated by Dirk Zimmer

1979 / THE GARDEN OF ABDUL GASAZI by Chris Van Allsburg

1983 / NO ONE IS GOING TO NASHVILLE by Mavis Jukes, illusrated by Larry Bloom

1984 / THE MYSTERIES OF HARRIS BURDICK by Chris Van Allsburg

1985 / CHLOE AND MAUDE by Sandra Boynton

1988 / THE PORCUPINE MOUSE by Bonnie Pryor, illustrated by Maryjane Begin

1991 / THE ENCHANTED WOOD by Ruth Sanderson.

1992 / THE KING'S EQUAL by Katherine Paterson, illustrated by Vladimer Vagin

1993 / THREE SACKS OF TRUTH by Eric A. Kimmell, illustrated by Robert Rayevsky

1995 / WICKED JACK by Connie Nordheim Wooldridge, illustrated by Will Hillenbrand

2006 / ONCE I ATE A PIE by Patricia MacLachlan and Emily MacLachlan Charest, illustrated by Katy Schneider

2007 / THE WICKED BIG TODDLAH by by Kevin Hawkes

2008 / MAIL HARRY TO THE MOON by Robie H. Harris, illustrated by Michael Emberley
Posted by Peter D. Sieruta at 9:57 AM

Thank you so much for highlighting the work of Irma Black and the Irma Black and James H. Black Award for Excellence in Picture Books. Now that doesn't flow trippingly off the tongue like Newbery and Caldecott. At school we call it the Irma Black. It kinda folds together irmablack. Marketing geniuses a few years back tried on The Irma for a awhile but it didn't take. I am pleased as I poured over the list how these books have stood the test of time. One of my favorite outcomes of the picture book evaluation curriculum is that our 4th and 5th graders are paired with kindergarten and first graders and they always come pouring into the library requesting Irma Black books to read with their buddies. Lisa Von Drasek, children's librarian, Bank Street College of Education