The National Book Awards will be announced tonight in New York. I learned long ago that there is little point in trying to second-guess these awards, as the least likely titles often come out on top. Last year is a good example. Although I very much liked Judy Blundell's WHAT I SAW AND HOW I LIED and had it ranked second highest in my critique of the top five, very few people expected it to win.

Here are my thoughts on this year's nominees, beginning with what I consider the least successful book and working up to my favorite of the five finalists.

First edition points: Red paper boards with title embossed on front oover. The dustjacket has a price of $16.99 on the back. The copyright page must contain the statement "First Edition" and the following complete numbering sequence: 1 2 3 4 5 6 7 8 9 10.

Difficulty in finding first editions: The book is already in at least its fourth printing.

The plot is simple: one morning at school, Trina cuts past Dominique and a group of girls gathered in the hallway. Dominique is incensed ("Unh-unh. Can't let her cut into me like that. Through my space. Through me. Can't let that slide.") and plans to jump the oblivous Trina after school. Leticia witnesses the incident and must decide whether to 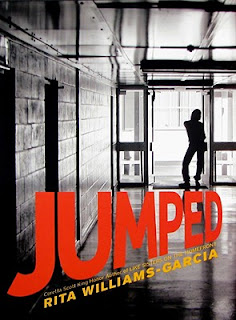 warn Trina in advance. Related alternately in the colorful, mouthy, loud (you can hear the volume coming right off the page) voices of these three characters, JUMPED is in many ways a triumph of first-person narration. Williams-Garcia does a good job revealing three distinct characters -- angry, basketball-playing Dominique, shallow Latisha, and egotistical Trina -- with three distinct voices. But what's missing in their monologues is any sense of introspection or self-awareness. Because, for example, we never see any self-doubt, irony, or questioning behind Trina's constant self-praise, she comes across as insufferable to the reader of the book as she does to Dominique within the story. None of the girls really change over the course of the novel -- the Dominique we see at the end is as angry as the girl we first met; Leticia remains as clueless on the last page as she was on the first. This results in limited, even superficial, characterizations, but does provide a sense of inevitability to the novel's powerful and thought-provoking conclusion.

First edition points: Black paper boards with title embossed on front cover. The dustjacket has a price of $17.99 on the front flap. The copyright page must contain the statement "First Edition, October 2009" and the descending number sequence: 10 9 8 7 6 5 4 3 2 1.

If I was working for a magazine and given LIPS TOUCH : THREE TIMES to review, I'd probably hand it back, saying, "I'm not the right reader for this book." I do not have that luxury in writing today's blog, so will just preface my remarks by saying that, with some exceptions, novels of fantasy and magic are Not My Thing. 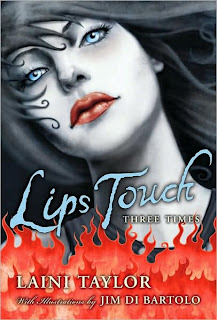 Having said that, this collection of three romantic tales, each centered around a kiss, contains two stories that even I enjoyed. "Goblin Fruit" tells of misfit Kizzy, who finds herself falling for the dangerous new boy at school; "Spicy Little Curses Such as These" concerns Anamique, who is cursed with silence from birth. Both tales of first love feature well-defined settings (modern-day America and Victorian-era India), startling plots, well-drawn characters, and lyrical language reminiscent of Francesca Lia Block. The final story in the collection, "Hatchling," concerns fourteen-year-old Esme, whose mother escaped from the "druj" -- a group of demons who have the ability to "wear humans...for fighting and rutting and dancing and other such things as make mortal blood flow fast." Now the druj are back for Esme. It's a convoluted story that skips back and forth between generations (Esme and her mother Mab) and locations and reminded me of why fantasy is Not My Thing. Although novella-length, "Hatchling" felt rushed and condensed -- and one wonders how it would have fared as a lengthier, stand-alone novel.

Difficulty in finding first editions: Already showing up on some of the "year's best" lists, STITCHES is a hit -- and first editions may become difficult to find over time.

In his memoir, STITCHES, writer-illustrator David Small explores the dark, soul-killing aspects of silence. Growing up in 1950s Detroit, Small lived in a silent, unloving home punctuated by an unspoken current of anger (“Mama had her little cough...once or trice, some quiet sobbing, out of sight...or the slamming of kitchen cupboard doors. That was her language.”) 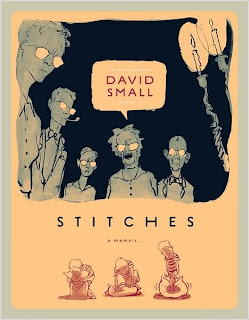 When he was fourteen years old, Small had surgery that resulted in losing his own voice; in typical fashion, his parents never told him he was suffering from cancer until he accidentally uncovered the truth. Their response? “Well, the fact is, you did have cancer...but you didn’t need to know anything then...and you don’t need to know about it now. That’s final!” Small tells his story mainly through illustration, with only a minimum of text. The superb artwork has a cinematic flow, occasionally utilizing metaphor (an analyst is depicted as the White Rabbit from ALICE IN WONDERLAND) and moments of surrealism in an otherwise unflinchingly honest, often horrifying, memoir. STITCHES doesn’t exploit the author’s brutal childhood, nor does it wallow in self-pity; instead, it ultimately tells how a damaged young man recovers his voice, both literally and -- through therapy, leaving home at an early age, and discovering his talent (“Art has given me everything I have wanted or needed since”) -- figuratively. Though nominated for an NBA in the category of "Young People's Literature," STITCHES was originally published for adults and -- since the real growth and change experienced by the protagonist occurs toward the end of the book, after he's grown up -- I actually feel this story is best suited for adult readers rather than young readers -- or, since there are always exceptions -- maybe I should say: most young readers.

Difficulty in finding first editions: Still available at many stores.

We all know Rosa Parks, but how many know the story of Claudette Colvin, the Montgomery, Alabama 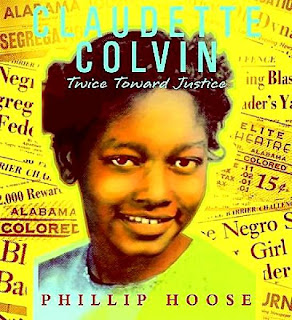 teenager whose refusal to give up her bus seat occurred nearly a year before Mrs. Parks' historic arrest? Charged with violating segregation laws, disturbing the peace, and assaulting a police offer, the young African American woman would later serve as one of four plaintiffs in the Browder v. Gayle Supreme Court decision. Extensive quotes from interviews place Claudette Colvin's personal fight for justice within the context of the broader history of the civil rights movement, while simultanesously introducing other notable figures of the era, including Rosa Parks, Ralph Abernathy, and Dr. Martin Luther King. This oversized volume -- concisely written and illustrated with black-and-white photographs, presents young readers with an empowering portrait of one teenager who made a difference.


CHARLES AND EMMA : THE DARWINS' LEAP OF FAITH
by Deborah Heiligman
Henry Holt

Difficulty in finding first editions: Published very early in the year (despite its 2009 copyright date, some sources say the book was released in late 2008...what does that mean for its Newbery chances?), the book may now be in later printings. But take a look around at your local bookstore.

Of the five National Book Award finalists, this may be my favorite. Not just a biography of Charles Darwin, or a portrait of his happy marriage to Emma Wedgwood, the 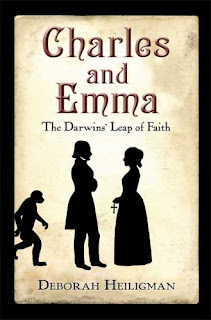 book explores what happens -- in very personal terms -- when science (Charles) and religion (Emma, a devout Christian) clash. The answer, at least in this case, is compromise and understanding. It's an issue as timely today as it was when Darwin began expressing his then-daring theories of evolution in the mid-nineteenth century. CHARLES AND EMMA is a fine work of scholarship written in accessible prose. It's notable that the subject of Charles and Emma's marriage, like the story of Claudette Colvin above, is getting one of its first tellings within the pages of a book for young readers. There was once a time when nonfiction and biographies for adult readers would beget junior editions for kids. But today many important and original topics are seeing first light in children's books; adult versions of these stories will no doubt turn up eventually...but right now childrens' books are where it's at!
Posted by Peter D. Sieruta at 9:57 AM

Hey, maybe you're on to something with your second favorites winning - that's two years in a row!