The Mural in the Gym

The economy was a mess. Jobs were impossible to find.

But this was back in the thirties.

James Daugherty was an illustrator and muralist who had recently moved with his young family from New York to a small town named Weston, Connecticut. Soon after arriving in Weston, Mr. Daugherty joined a couple Connecticut arts organizations. His work in their group exhibitions attracted media attention and he soon found himself working for the "Public Works of Art Project" -- a New Deal program established by President Franklin Roosevelt to ease unemployment and create art for public buildings. Beginning in 1934 and, continuing for several more years, Mr. Daugherty painted murals in schools and other government buildings.

One of his projects, "The Life and Times of General Israel Putnam of Connecticut," was a 9 by 22 foot mural celebrating the Revolutionary War hero. It was displayed at the Town Hall in Greenwich, Connecticut from 1935 until 1940, when the Town Hall was renovated and Daugherty's mural was transferred to the Hamilton Avenue School. There the mural was hung high on the wall of the gymnasium, where it was battered by basketballs and grew increasingly dark with age.

No one paid much attention to the mural until the Daugherty Archive, which owned preliminary sketches for the work, tracked it down at the Hamilton Avenue School. The Ruth W. Brown Foundation granted $60,000 for the painting to be restored, then moved to the school's lobby.

But a funny thing happened during restoration.

According to a 2006 New York Times article:

...Scrubbed of dirt, the painting became a richly colored scene of snarling animals, tomahawk-wielding American Indians and a half-naked General Putnam strapped to a burning stake.

“We run a very tight ship in terms of behavior,” said Damaris Rau, the principal of the Hamilton Avenue school. “How can I then have a mural that depicts guns and knives, when I don’t accept that from my own children?”

Ms. Rau also said the school, which has the highest minority population in a predominantly white district, could not endorse a painting that cast Indians in a negative light.

After much debate, it was decided that the mural was "too violent for the school" and would instead be hung in the reference section of the Greenwich Public Library.

A different painting, showcasing local (non-violent) history, would replace the Daugherty mural in the lobby of the school.

So the story has a happy ending.

One can't say that Daugherty's mural, "The Life and Times of General Israel Putnam of Connecticut," has been censored. It never was intended for children, after all; the original work was created for the Town Hall. And it's now on view in a public library where children can, of course, look at it if they wish.

But there is something rather ironic about this story.

When James Daugherty's work for the WPA came to an end, he began writing and illustrating children's books. His first, ANDY AND THE LION was named a 1939 Caldecott Honor Book.

1939 was also the year he published DANIEL BOONE. Looking at that book today may cause readers to raise their eyebrows.

People complained that the mural depicted snarling animals and a half-naked Israel Putnam?

Well, here's a picture from DANIEL BOONE depicting a snarling wildcat and a half-naked Baby Boone: 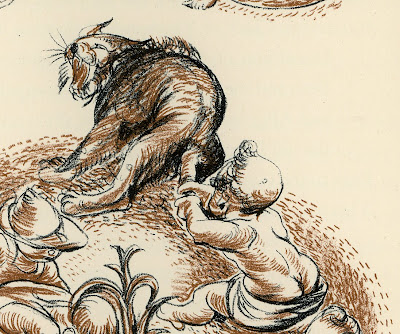 There was concern that the mural showed "tomahawk-wielding American Indians." Well, so does DANIEL BOONE: 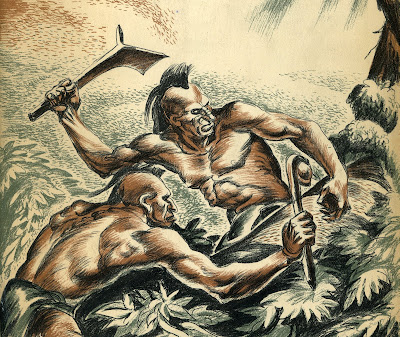 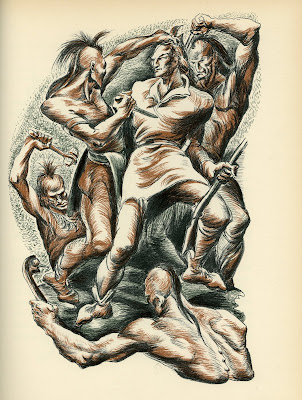 And what's that they said about casting Native Americans in a negative light? 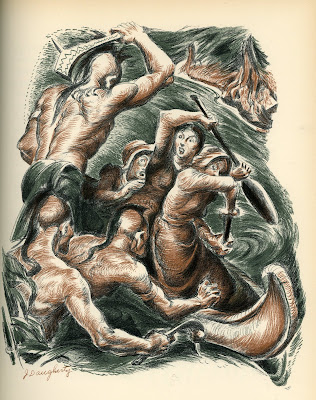 All the controversial images which drew criticism in the mural are also on view in James Daugherty's DANIEL BOONE... 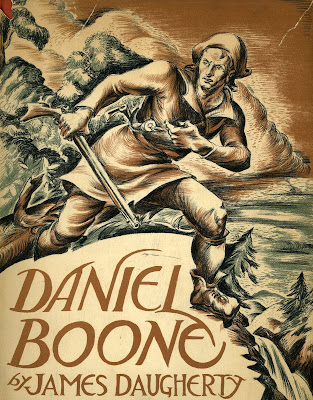 ...a children's book which won the 1940 Newbery Medal. Granted, it's probably nobody's favorite Newbery, but its status as an award winner keeps the book on most library shelves even today.

I wonder if it's in the library at the Hamilton Avenue School?
Posted by Peter D. Sieruta at 9:58 AM

Hmm... Peter, I've heard from several people that DANIEL BOONE has been the hardest Newbery winner to find, actually. (Harder than Dobry? It surprises me.) Certainly it isn't reprinted and used as much as Amos Fortune, which is just as bad in a different way; I've wondered if maybe the reason that Daniel Boone is more widely recognized as offensive is because of its illustrations. I'd guess that more people readily recognize an offensive illustration than an offensive passage. "But that's what people really thought Indians looked like back then!" doesn't quite have the ring of "But that's what people thought about Indians back then!", as apologia go.

who is the best in this world