Several years ago I discovered a large box of books from my brother's and my childhood that our mother had packed away. There was PETEY THE PEANUT MAN by Jean Bethell (mine), THE WITCH OF HISSING HILL by Mary Calhoun (his), PROJECT GENIUS by William Hayes (mine), PART-TIME DOG by Jane Thayer (his.)

Then I came across a book I'd never seen before in my life: 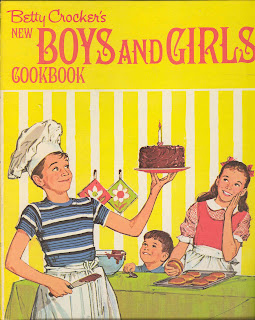 It wasn't mine, it wasn't his. Whose was it? And why was this heretofore unknown cookbook buried at the bottom of a box in the cobwebbiest corner of the basement?

After a few minutes of contemplation, I think I figured out The Mystery of the Hidden Cookbook.

But I'll let that story bubble on the backburner for a few minutes so we can discuss some other kids' cookbooks. At present, there are over 2400 cookbooks for children listed on Amazon.com, ranging from celebrity volumes (Paula Deen's got one coming out next week) to books aimed at specific cultures (Mexican, Italian) and special diets (kosher, vegetarian.) My favorite sub-genre is cookbooks associated with works of literature: nursery rhymes, classic books, fictional characters.

PEASE-PORRIDGE HOT : A MOTHER GOOSE COOKBOOK by Lorinda Bryan Cauley (1977) is something of an oddity. 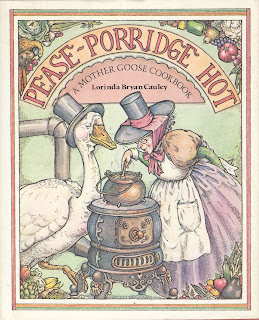 For one thing, it doesn't include a recipe for pease-porridge; it does, however, serve up "The Three Bears' Hot-and-Yummy Breakfast Porridge," which contains rolled oats and wheat germ. There are also "The Three Little Pigs' Cinnamony, Jinnamony Baked Apples" and (cruelly) "The Big Bad Wolf's Little Pigs in a Blanket." (I'm surprised there wasn't a recipe for roasted and stuffed Mother Goose!) The recipes are fairly easy, though I contend that kids old enough to halve zucchinis and grease custard cups will probably consider themselves too old for nursery rhymes. I think everyone who utilizes this cookbook, regardless of age, will come away with the same question: what the heck does "jinnamony" mean?

Virginia H. Ellison's THE POOH COOK BOOK (1969) contains a wide variety of recipes for breakfasts, lunches, dinners, and smackerals ("Nearly eleven o'clock, said Pooh happily. You're just in time for a little smackerel of something..." -- THE HOUSE AT POOH CORNER) as well as recipes for picnics and expotitions ("Oh! Piglet, said Pooh excitedly, we're going on a Expotition, all of us, with things to eat. To discover something." -- WINNIE THE POOH), parties, and Christmas. 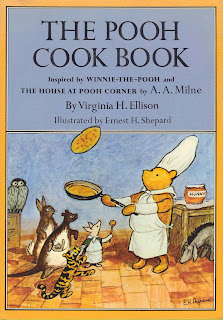 The recipes are fairly simple, most calling for a minimum of ingredients. Best of all, there are quotes and pictures from the books (by original artist Ernest H. Shepard) to keep the cook entertained while your "Minted Honey Banana Bread" or "Christmas Nut Cookies" are baking in the oven.

There's only one bad thing about the book. The title. I called the bookstore and asked if they had a Pooh cookbook and the clerk hung up on me.

Illustrations by original artist W.W. Denslow also highlight THE WONDERFUL WIZARD OF OZ COOKBOOK by Monica Bayley (1981), which contains recipes suggested by elements in the book ("Cyclone Jumbles"; "Cowardly Lion Quivering Gelatin") and, sometimes bizarrely, connected to colors in the novel: "On the Yellow Brick Road and in Winkie Country, yellow ingredients are used. In the Country of the Munchkins, the color is blue; in Quadling Country, red; and in the Emerald City, of course, green." 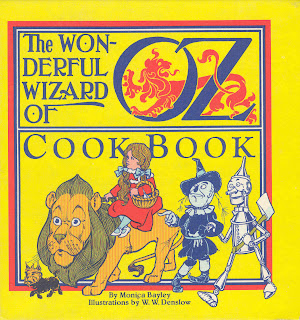 That's all fine in theory, but do you really want to try "Soldier with Green Whiskers Salad"? (Spit take.) Me neither. 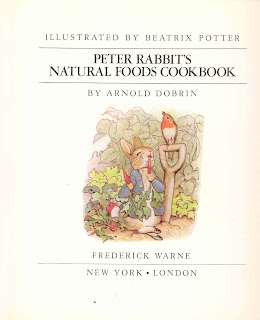 The recipes for soups, sandwiches, salads, breakfasts and desserts are simple and healthy and the cover of the volume is "washable with damp cloth" in case you accidentally spill "Old Mrs. Rabbit's Hearty Vegetable Soup" or "Mr. McGregor's Scrumptious Pureed Beets" on the book.

THE ANNE OF GREEN GABLES COOKBOOK by Kate MacDonald (1985) uses quotes from the L.M. Montgomery novels as starting points for each of the recipes. Diana's statement "You know I can make splendid lettuce salad," in ANNE OF AVONLEA prefaces a recipe for (what else?) "Splendid Lettuce Salad." 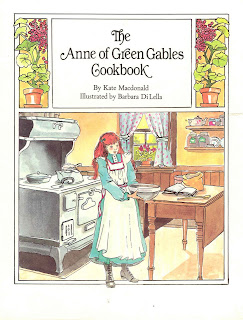 Readers may recall that in ANNE OF GREEN GABLES the heroine accidentally uses liniment as a cake ingredient. This book provides a cake recipe substituting vanilla extract for the liniment. It probably tastes good, but it won't do a thing for your aching back.

MARY POPPINS IN THE KITCHEN (1975) is by the series' original writer and illustrator P.L. Travers and Mary Shepard. (Mary is the daughter of WINNIE THE POOH illustrator Ernest, by the way.) 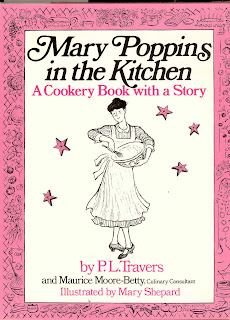 This volume actually begins with a new story about Mary Poppins and the Banks children. Spending a week without their parents or Reta Shaw (I mean, Mrs. Brill), the kids prepare a variety of meals. Each section of the story concludes with that day's menu and the remainder of the book contains recipes for these sometimes sturdy meals (Irish Stew, Shepherd's Pie, even Lemon Souffle.) Isn't souffle supposed to be, like, one of the hardest things in the world to make? I think Poppins should have just used her magic to whip up the meals and saved the kids from all that sifting and stirring.

Probably the most comprehensive cookbook-based-on-fiction I encountered was THE LITTLE HOUSE COOKBOOK by Barbara M. Walker (1979.) 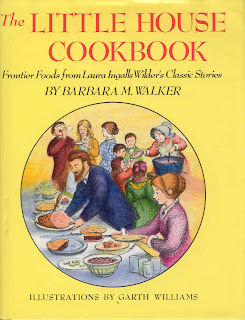 Not only does this volume contain copious quotes and illustrations (by Garth Williams) from the Laura Ingalls Wilder books, but it places the recipes in historic context, explaining how vegetables were grown and stored and how to churn butter, among other fascinating details. And you've got to love a book that contains a recipe for "Blackbird Pie" (first ingredient? "Starlings, 12, plucked and dressed.") You don't have to EAT it, but you've got to love that they included it.

And here's a book I love for another reason. Unlike the previous volumes, which are based on way-famous stories and characters, THE STORYBOOK COOKBOOK by Carol MacGregor (1967), also includes recipes based on some of my favorite twentieth-century children's books, including MISTY OF CHINCOTEAGUE, RABBIT HILL ("Sulphronia's Southern Fried Chicken"), THEE, HANNAH! ("Pennsylvania Pretzels") and ROLLER SKATES. 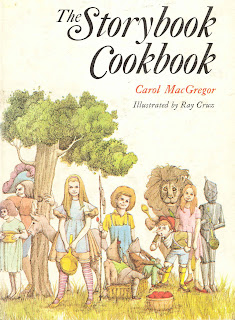 One of my favorite Halloween scenes in all of children's books is in Joseph Krumgold's Newbery winner ONION JOHN, which features an all-sugar meal highlighted by a Mocha Cake with the phrase "Good Wishes, Rusch, Schwartz, Hemmendinger, Ries" written on top. Even that recipe is here!

We used to call them comic books. Now they are graphic novels. And here's one comic book kid who inspired his own cookbook: 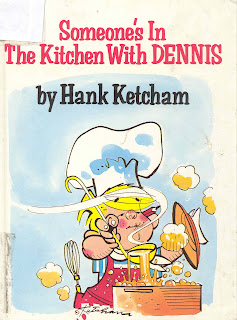 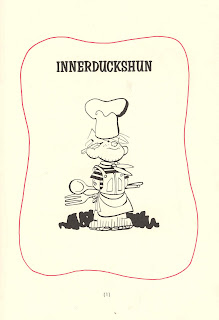 and then turns right around and includes a recipe for "Creme Vichyssoise Glace."

Finally, there's GINNIE AND GENEVA COOKBOOK by Catherine Woolley (1975), a companion to a series of novels and mystery stories about these characters, including the foodie volume GINNIE AND THE COOKING CONTEST (1966.) 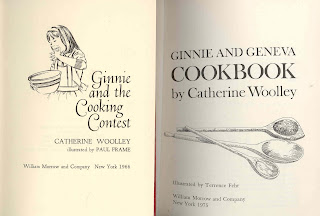 I have to admit I'd never been innerduced to the "Ginny and Geneva" books until today, but they must have been pretty popular if they inspired an associated cookbook. Incidentally, Catherine Woolley, who died recently at age 100, also used the pen name "Jane Thayer" and wrote such books as PART-TIME DOG, which I found in that box of old children's books along with the mysterious NEW BOYS AND GIRLS COOKBOOK by Betty Crocker.

Now about that cookbook....

Around the time that book was published, one of our young relatives had a minor mishap in the kitchen. A little grease fire. Well, a little grease fire that ended up engulfing the entire kitchen in white-hot flames and nearly burning down their whole house. After that, I don't think our mother wanted us experimenting in the kitchen. In fact, I don't think she wanted us within twenty feet of that room. So BETTY CROCKER'S NEW BOYS AND GIRLS COOKBOOK mysteriously disappeared and, consequently, my best recipes today involve putting a Lean Cuisine or styrofoam take-out carton into the microwave and pressing "start."
Posted by Peter D. Sieruta at 11:10 AM

We had that Betty Crocker Cookbook when I was a child and I remember the line drawings and photos like that was yesterday!

My children found a copy at the used bookstore in town and now cook an occasional meal from it. Very entertaining to see it again.

And I still have my own copy of Ginny and the Cooking Contest. : )

Are you familiar with MUD PIES AND OTHER RECIPES? Not as tasty, but charming in it's own way.

Neat to see a mention of Lorinda Bryan Cauley. I taught two of her kids long ago;a lovely person. And I got a kick out of that Betty Crocker book. One of my favorite books at age five was a Cambell's Soup book for kids. I vaguely remember one recipe that had something to do with tomato soup and grilled cheese cut into faces or something. Bet I could find the book online, don't ya think?

Barbara Walker has also penned a Secret Garden Cookbook, which contains equally well-researched information about Edwardian cooking. And unlike that Mother Goose cookbook, it actually contains a recipe for pease porridge.

I second the motion on MUD PIES, as well. Charming little book!

Jane Brocket, who has a very popular blog called Yarnstorm, just wrote a book called Cherry Cake and Ginger Beer, which celebrates the foods mentioned in a whole long list of children's books, from Milly Molly Mandy to Little House to Little Women, and more. She lives in England, so the book has a definite British slant, and all of the recipes use European measurements. I don't know if it will be published in the U.S. (looks like the British version is available through Amazon), but it may be one to track down just for fun.