Many of us involved with children’s books tend to see the world from a youthful perspective. We’re interested in how things start and how things grow. We’re fascinated by creation and beginnings...even though it’s often hard to pinpoint exactly when something begins. I’m reminded of one of my favorite young-adult novels, THE CRUCIBLE YEAR by Norma Johnston, in which the protagonist muses about “Ends, beginnings...like a doorway you run through headlong, not even noticing, until the door shuts behind you, and you know you have left childhood and a part of your life behind you.”

I definitely felt one of those doors shut behind me on the morning of September 11, 2001. I think everyone in the country heard a door slam shut that day.

It left us angry and confused, wondering how this had happened, how it had begun. Historians would probably say it began hundreds of years ago with tribal disputes, or at least decades back with political conflicts. I searched my own memory and kept recalling a Saturday early that spring when I came across an internet story about the destruction of giant Buddha statues in Afghanistan -- thousand-year-old artistic, cultural, and historic artifacts reduced to rubble by the Taliban. “Gosh, that’s terrible,” I said, then clicked the button on my mouse and moved on to another article.

A few months later, a coworker worriedly told me about a student employee who used a portrait of Osama bin Laden as the screensaver on his computer. “Gosh, that’s terrible,” I said, and then changed the topic to something more trivial.

Then came the morning of September eleventh and I had no words at all.

That November I visited New York and saw the fire stations draped with black bunting, saw posters and photos of the “missing” on fences and walls, took a cab to Ground Zero and saw the smoke still rising from the ruins of the towers more than six weeks after the attacks. Again: no words. 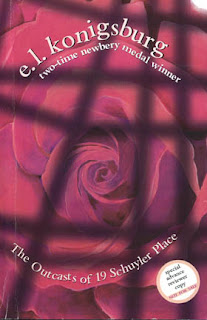 Konigsburg’s newest book, THE OUTCASTS OF 19 SCHUYLER PLACE. One of the many reasons I love ARCs is that they often contain information that is not included in the final bound copy of the book. Frequently it’s a letter from the author, describing the book and its origins. I’ve already mentioned that I’m interested in hearing how things begin -- and nothing fascinates me more than learning how a book came to be created. Ms. Konigsburg’s letter explained what motivated her to write this story about Margaret Rose Kane, who was first introduced in the author’s earlier novel SILENT TO THE BONE. This new book also concerned Margaret Rose’s two great-uncles “who have spent the last forty-five years building three giant towers from scrap metal and shards of glass and porcelain” in their backyard. Because the towers do not fit in with the “historical integrity” of the neighborhood, the local Restoration Authority has decided they need to be destroyed. Konigsburg continues:

As I said, this note from the author appears only in the ARC -- not the final hardcover copy of THE OUTCASTS OF 19 SCHUYLER STREET. Nor is there any reference to the Taliban or the destruction of the Buddhas within the novel; the story is set in 1983, nearly two decades before those events occurred. Yet the author somehow found a vehicle for addressing these issues in 19 SCHUYLER PLACE. While the actions of the Taliban left many of us mumbling inanities (“Gosh, that’s terrible”) or struck silent to the bone, E.L. Konigsburg found the words.
Posted by Peter D. Sieruta at 3:15 AM

I vaguely recall Konigsburg doing a reading from the manuscript at the Bank Street Bookstore before the book was out and I thought she made it clear that it wasn't in response to 9/11.

That's interesting to hear. But I have to wonder if it was more than just a coincidence that she wrote a book about towers being destroyed just two years after 9/11...and then used much of the author's note in the ARC to discuss the actions of the Taliban.