Sometimes I see old diaries and journals listed for sale in catalogs and on the internet. "Never written in!" the seller proclaims. "Unused! Pages clean!"

Where's the fun in that?

I'd much rather find a diary filled with entries -- and take a peek into someone's past.

Such volumes can be found -- on eBay, at used booksales, in dusty corners of old bookstores. The content is rarely scintillating. In fact, it's usually humdrum. But even at their most prosaic and plodding, such journals are fascinating for the insights they give us into an earlier era and the everyday life of a total stranger.

I just came across this palm-sized BOY SCOUT DIARY 1925:

It was kept by a twelve-year-old boy from Detroit named Edwin Wuerfel. Like so many of us, Edwin started the year with a bang, penciling-in entries from Thursday, January 1, 1925 all the way till Sunday, January 25. Then there are nothing but blank pages for months and months. That's the fate of many, even most, diaries. But unlike the rest of us, Edwin actually returned to his diary in December, making an entry every day from Saturday, December 5 to New Year's Eve.

I'm fascinated by the slightly archaic writing style: "I was to school and hauled paper" (January 5), "I was to patrol meding" (December 7.) As you might guess from the word "meding," there are no entries in which Edwin talks about winning a spelling bee. His spelling is pretty atrocious. "Choir" is spelled "chiar"; "special" is "spesled." 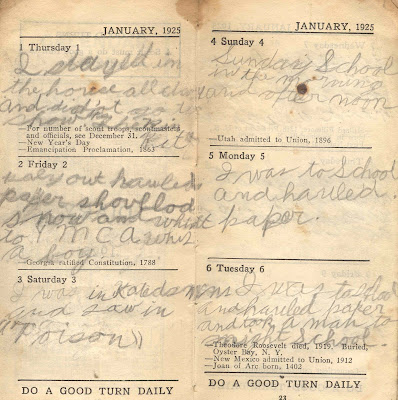 Edwin appears to be an industrious kid, hauling papers and helping out at his father's bakery (earning either fifty cents or a dollar each time he assists.) The motto "DO A GOOD TURN DAILY" is printed at the bottom of each page, and we get at least one example of Edwin doing a good turn; one day in January he "took a man to night school." He attends a missionary meeting and, midway through December "I went to put $1.00 in the bank." Two days later: "I went to pass my Thrift." (Is that Boy Scout badge for thriftiness?) He also talks about seeing a show nearly every Friday or Saturday (including a 1924 movie called POISON) at a theatre called something like "Kaledsommes" (darn, why couldn't this kid spell better? I'd like to track down this theatre and find out if the building is still standing on some boarded-up downtown street.)

There's only one mention of Edwin's mother (January 7: "I was to school and hauled paper and give my mama a sleigh ride") and one mention of his father (December 17: I work in the bakery to help da.") There are no references to siblings and he's rather vague about friendships (January 2: "Whint to YMCA with a boy." December 29: "I went out to some boy home.")

I'm intrigued by the fact that he notes December 24 with "It was Christmas Eave" yet only memorializes Christmas day with these five words: "I had a good dinner."

The very last entry for the year, December 31, says: "Takling about slaride." (It actually seems his spelling got worse as the year went on. He spelled "sleigh ride" correctly back on January 7!) 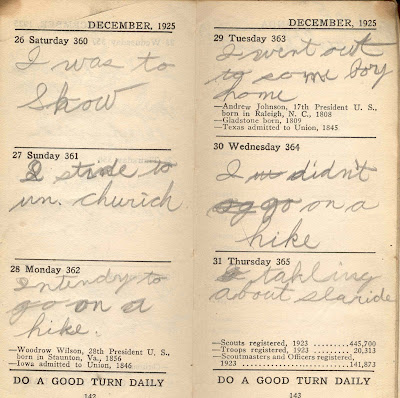 In addition to the diary pages, the book also includes lots of information on merit badges, "signaling by two-arm semaphore," bandaging techniques, camping hints, and even songs from the Boy Scout Songbook, which include "America the Beautiful," "Hail! Hail! The Gang's All Here!," "Aloha Oe," and "My Old Kentucky Home."

I also like this ad for Boy's Life Magazine on the back cover: 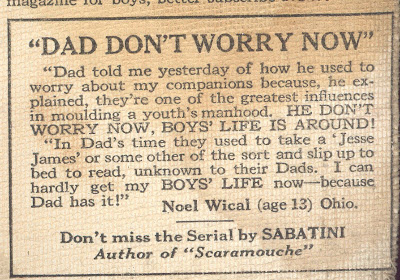 I was curious if Noel Wical, the boy from Ohio quoted in the ad, really existed. So I looked him up and discovered that this kid who was already writing letters to magazines at age thirteen grew up to have a long and distinguished career in journalism.

But what about Edwin Wuerfel? One of the songs in the back of the BOY SCOUT DIARY contains the lines:

Some day I will be old, boys, my hair'll be falling out,
My joints will all be squeaking with the rheumatiz and gout

I don't know if Edwin suffered those maladies, but an internet search reveals that he grew up to marry a woman named Ann and died at a good old age in 1997 in the city of Roscommon, which is about three-quarters of the way up the Michigan mitten. How did he get there? How did he spend his life? His BOY SCOUT DIARY leaves me with more questions that answers.

For example, the last page of the diary section is labeled "MEMORANDA" and the only thing he wrote beneath that was: "Feb. 7, 1925 I saw 'the feval.'" What's 'the feval'? A movie? A ship on the Detroit River? A famous person? Why did he memorialize the event on this page? We'll never know.

Then there's the next page, which contains blank address listings:

All the addresses remain blank, but if you hold the book to the light you will see the name "Richard" was written and then erased from the top line. Who was Richard? Why did he get erased?

So many questions, so many blank pages and empty entries.

And now, eighty-three years later, we can only use our imaginations to fill in the blanks.
Posted by Peter D. Sieruta at 10:46 AM

Just wanted to say how much I enjoy your thoughtful posts about books and children's literature -- a real delight and full of useful information!

I'm always on the hunt for great children's books and have recently discovered Bayard and their series of StoryBoxBooks, AdventureBoxBooks and DiscoveryBoxBooks. There's lots going on too:
This Month Storybox has guest illustrator Helen Oxenbury fetured.
There's a Readathon happening in UK and Ireland - http://discoveryboxbooks.com/readathon.php
There's a Ghost Drawing competition in AdventureBoxBooks assiciated with the Polka Theatre (http://www.adventureboxbooks.com/competition.php)

Have you ever read the book mentioned in the advert.-- Scaramouche, by the Great Sabatini? I vaguely think I saw a copy in a used book store recently, but passed it by...

I have a very smart son who is a rotten speller. I'm wondering if "feval" is supposed to mean "festival." That's just the kind of spelling error my son would make.

It's always fun (and a little sad) to discover great finds like this! Humdrum or not , it's almost like time travel, or least the closest to time travel you're going to get!

I'm with the anoymous person above, "feval" really could be festival! This is a great blog you have here and I will be back to visit again soon!

Noel Wical was my grandfather! And the reason I got into journalism. Thanks for this.