Let's Run Away to the Cummer Museum!

Hey, look at this photograph.

Taken over forty years ago, the black-and-white image is now dimmed by sunlight, maybe a little scratched and worn...but doesn’t it look familiar? 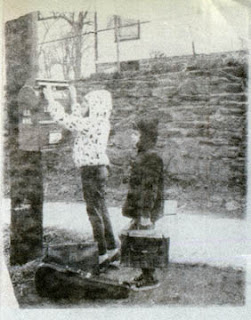 Here’s another old photo. It’s not a family member or one of your friends, yet somehow you’re certain you’ve seen this picture before.... 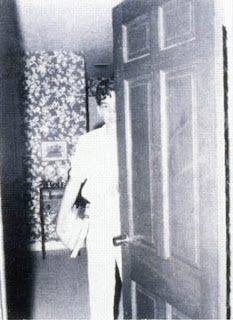 If you’re a children’s book fan, you definitely know these images. They are familiar from the works of E.L. Konigsburg.

The first photo features Konigsburg's daughter and son, Laurie and Ross, posing for an illustration that appears early in her classic 1967 novel FROM THE MIXED-UP FILES OF MRS. BASIL E. FRANKWEILER. I’m amazed by how closely the photo matches the illustration. The only major change is that Laurie wore pants and Claudia wears a skirt: 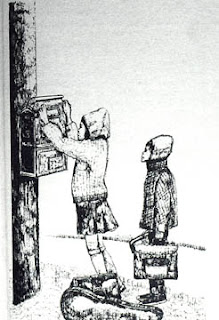 The photograph of the boy-behind-the-door is Ms. Konigsburg’s son Paul posing for the cover illustration of his mom's 1970 novel (GEORGE): 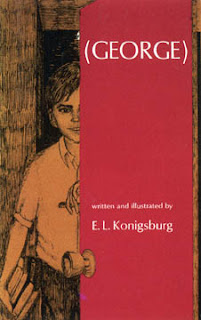 I found these images in a fascinating volume called PAGES & STAGES : THE ART OF E.L. KONIGSBURG: 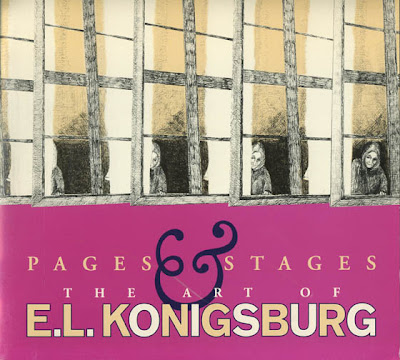 A must for any E.L. Konigsburg fanatic (and aren’t we all?), this 1999 booklet was published by the Cummer Museum of Art & Gardens in Jacksonville, Florida, in conjunction with a retrospective exhibition of Konigsburg’s work. It contains a piece the author wrote when her materials were archived at the Elizabeth Nesbitt Room of the University of Pittsburgh. There are holographic images of first draft manuscript pages (Konigsburg laments that such pages don’t exist for her later works because they were written on a computer: “Only a final draft exists. And it is on a disk. ... The computer has become Michelangelo’s fiery furnace and erased first and second drafts, numbered the pages and justified the text.” PAGES & STAGES also contains reproductions from the original hand-made edition of SAMUEL TODD’S BOOK OF GREAT COLORS (1989), letters to and from Konigsburg's editors, and pictures of the foreign editions of some of the author’s books. (I’m assuming SACRES SAMEDIS is THE VIEW FROM SATURDAY. What about CARODEJKA JENNIFER? I looked up “carodejka” and found that it means “enchantress, fairy, hag” in Czech. Apparently this edition of JENNIFER, HECATE, MACBETH, WILLIAM MCKINLEY, AND ME, ELIZABETH plays up Jennifer's witchlike qualities and leaves Hecate, Macbeth, and William McKinley -- not to mention poor Elizabeth -- off the cover completely.)

PAGES & STAGES concludes with a checklist, detailing each item in the exhibition -- many of which are not included in this booklet. For those of us who couldn’t get to the Cummer Museum to see the exhibit, reading PAGES & STAGES is the next best thing to being there.

And if PAGES & STAGES stirs up an interest in visiting another museum, why not pull out a copy of FROM THE MIXED-UP FILES OF MRS. BASIL E. FRANKWEILER and join Claudia and Jamie Kincaid on their extended visit to the Metropolitan Museum of Art?
Posted by Peter D. Sieruta at 1:28 PM

And is the illustration on the cover of Pages and Stages from Father's Arcane Daughter? I loved that book even if I didn't quite understand it as a kid.