I have heard the rhyme "The House That Jack Built" all of my life...but I never knew until today that he had a last name.

That's just one of the interesting things I learned when perusing several older versions of this poem, published between 1820 and the late 1860s. According to the Wikipedia, "The House That Jack Built" was "derived from a Hebrew hymn in Sepher Haggadah" and did not appear in print in English until 1755 "when it was included in NURSE TRUELOVE'S NEW-YEAR'S-GIFT, OR THE BOOK OF BOOKS FOR CHILDREN."

The oldest bound copy I've found was printed by J. Kendrew of York, circa 1820. Here's a sample of the text, illustrated with woodcuts. (For a larger image, click on the picture.) 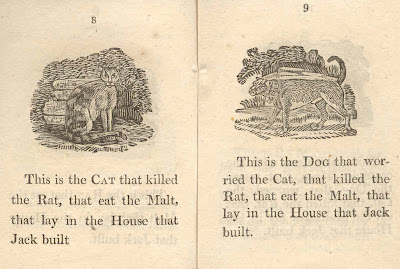 "The History of Jack Jingle" is subtitled "Showing by what means he acquired his Learning, and in consequence thereof got Money enough to build him a fine House, which is to this day called by the Country People 'The House that Jack built.'" In this story, young Jack is a good kid ("all the neighbors say it gave them pleasure to see him he was so industrious at work, so fond of his book, so dutiful to his parents, and so desirous of making every body happy, that there could not a better example for any children rich or poor.") always doing good deeds, like delivering a fish to his father's employer, Sir Luke Lovel. He encounters Sir Luke who is out and about in the middle of the day "much unlike our great folks now a days who lie in bed till one third of the day is over."

Sir Luke gives Jack a shilling, which Jack uses to buy a hen. When the hen lays eggs that "bring forth chickens" (no mention on how this was achieved with no rooster in the picture), Jack sells the chickens at market and buys a lamb. Now at this point we figure that Jack will continue buying and selling livestock and, in cumulative fashion, improve his lot in life until he builds his famous house. That doesn't happen here. Instead, Sir Luke sees him with the lamb, laughs "heartily" and immediately steps in to end the story with deus ex machina finality: "From this time Sir Luke grew so very fond of Jack that he ... sent him to school, where he behaved so well that he gained both the love of his master and school-fellows. Sir Luke also gave him a good estate, on which he built a House, which to this day is called 'The House that Jack built.'"

The next example of the poem is this version, printed by J.R. Orton of Binghamton in 1847: 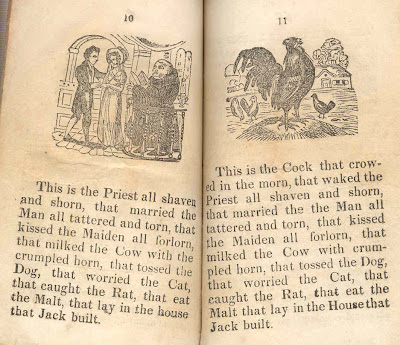 As an afterward, it includes a violent story about a rat -- presumably the rat "that ate the malt that lay in the house that Jack built." In this tale, a mother rat goes out, "but strictly charged her young ones not to venture from home,lest they should fall under the claws and jaws of the cat." Of course they do go out ("Surely our eight eyes will be a match for puss with only two.") and of course one gets caught in a trap and has his leg snapped off. When the mother rat returns, the three-legged rat (let's call him Tripod) and his brethren lie about what happened, claiming a trap "came into the hole" and bit off his leg. Yeah, right. Mother rat doesn't buy it either and tells Tripod, "You have got sufficiently punished for your fault. But your brothers I shall punish severely, for being disobedient to my orders and going out when I charged them not to go, and then for trying to cover their fault by all joining to tell a great falsehood."

Well, those words certainly tell the moral of the story...yet the narrator nonetheless feels obliged to REALLY hammer the point home: "One woeful sin generally leads to another; and it is well if sin doesn't end in ruin. Lies are generally bungling things, and are almost always sure to be detected, when they bring with them shame and punishment."

By the 1860s, things had lightened up a bit. These editions of "The House That Jack Built," all published by McLoughlin Brothers during that decade, don't include side stories about good Jack Jingle or bad rats. In fact, in this 1860 edition (illustrated by John Absolon and Harrison Wier), the "man all tatter'd and torn" gets a little frisky with the "maiden all forlorn"" 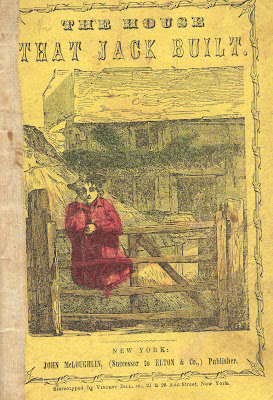 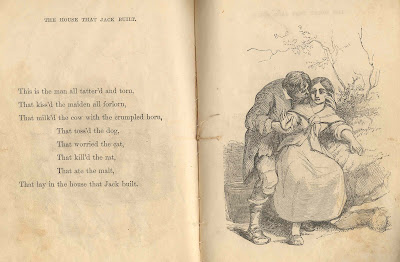 A few years later, "Aunt Louisa's Big Picture Book Series" included bright colored pictures of the tossed dog and forlorn maiden. I imagine that kids who only knew the black-and-white engravings, must have viewed this switch to color edition with the same awe we felt in the 1960s when we exchanged our black-and-white television for a color Panasonic. 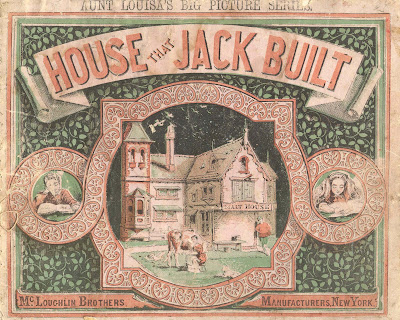 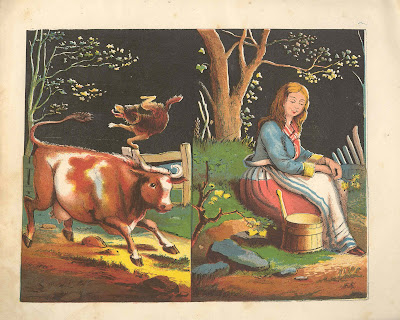 Next came Aunt Friendly (Louisa's nicer sister) with a color edition featuring the tattered man and forlorn maiden in yet another clinch: 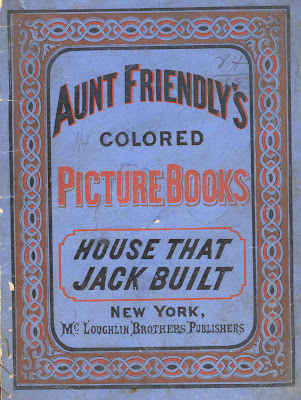 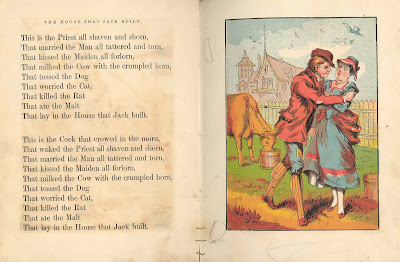 By far the most unusual version of "The House That Jack Built" that I've encountered is this one, printed on a silk handkerchief! We don't know the exact date it was manufactured, but someone has written "circa 1820" on an accompanying sheet of paper. The original cost, printed right on the handkerchief, is "one farthing." 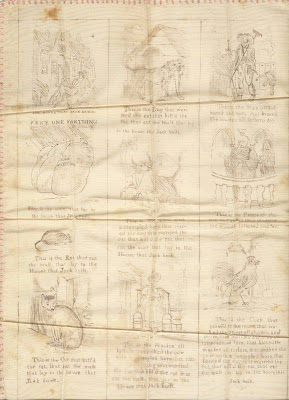 How amazing to think that this piece of silk, printed with words and illustrations, has existed for nearly two hundred years...through monarchies and presidencies, through civil wars and world wars, long before airplanes were invented and now long after humans have walked on the moon.

Just now, as I removed the handkerchief from its dusty protective envelope, I realized that I was probably the first person to touch this special piece of cloth in decades. ...Woo, it really is dusty. Ah-choo! But it's also valuable. That's why we keep this item stored away where it can't be damaged or harmed in any way.

Let me just stop and blow my nose for a second before I go on.

What a fun post. I never made the connection between The House that Jack Built and Had Gadya before! That song was first published in the Prague Haggadah of 1590 according to various sources. It is supposedly based on a medieval German folk song so maybe Jack also comes from the song? Jews had been banned from England in 1290 so I'm a bit skeptical about Had Gadya being a direct influence on Jack.

They were allowed back in 1656 though so that might give a date for Jack, but the "priest all shaven and shorn" indicates a medieval monk to me....