The Sincerest Form of Flattery

Go to any museum and you will see students plopped in front of great works of art, copying these masterpieces onto oversized tablets with pencil, ink, or crayon.

I used to think that budding artists who indulged in such public displays were a little show-offy (well, I still think the berets and scarves are a bit much), but at least I now understand the motivation for their actions. What better way to learn about art than to imitate the techniques of the masters? And where else are they supposed to find those works except on the walls of a big public museum? It's not like art students are allowed to check out the Mona Lisa at a circulation desk and take it home to copy in the privacy of their own home.

But I imagine there are also a lot of young artists who get an education without ever leaving the house -- drawing cartoon superheroes off the TV or replicating outfits from fashion magazines. My own brother used to spend hours copying Archie, Jughead, Betty and Veronica out of ARCHIE'S PALS AND GALS comic books. And one of our cousins copied characters from the Sunday funnies in colored chalk, then sprayed them with Aqua Net hair spray so the colors wouldn't smudge. Her bedroom smelled like the set of Steel Magnolias, but her colors never smudged.

I wonder how many children's book illustrators got their start imitating artwork from their favorite books. I've been thinking about this ever since I came across some drawings inspired by the books of Eleanor Frances Lattimore, most famous for writing LITTLE PEAR (1931), LITTLE PEAR AND HIS FRIENDS (1934), LITTLE PEAR AND THE RABBITS (1956), MORE ABOUT LITTLE PEAR (1971), and over fifty over children's titles -- many set in China. 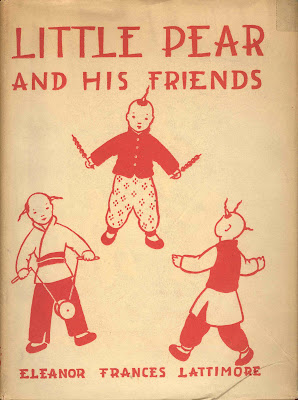 Eleanor Lattimore was born and raised in Shanghai, the daughter of American parents. Trained as an artist, Lattimore saw her writing as a natural extension of her art. LITTLE PEAR began with a series of illustrations; she later wrote the accompanying text in less than a week. (Geez, sometimes it takes me a week just to write one of these blog entries!) Many reference books credit Ms. Lattimore with introducing Chinese culture to an entire generation of American children -- and she seems to have escaped the usual criticisms that authors face when writing about cultures not their own. The "Little Pear" books continue to be loved by young readers and both LITTLE PEAR and LITTLE PEAR AND HIS FRIENDS remain in print today.

The latter book inspired these drawings I recently found. This page that shows a boy playing with a spinning toy called a "diabolo" 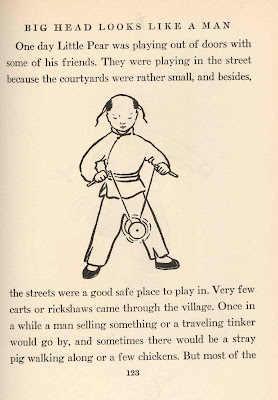 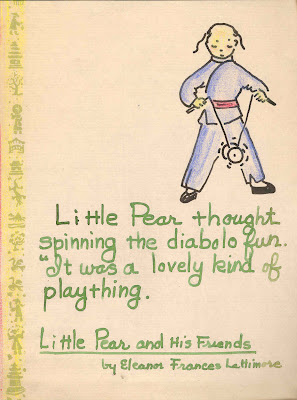 I've only known a shuttlecock from badminton, but in China at the turn of the century, a shuttlecock was a toy made from three rooster feathers weighed with two pennies and wrapped in cloth, then used to play the game we now call hacky sack: 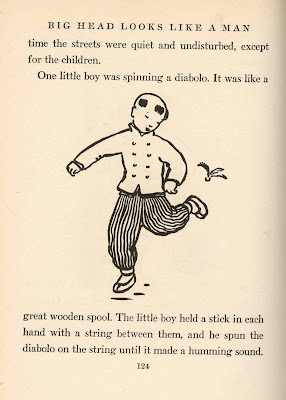 Here's how the young artist depicted that scene: 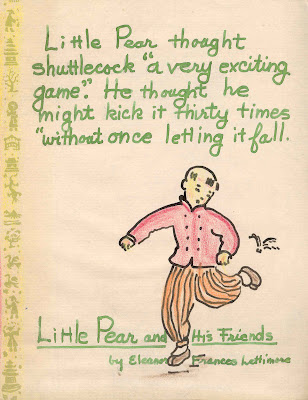 and is reproduced here: 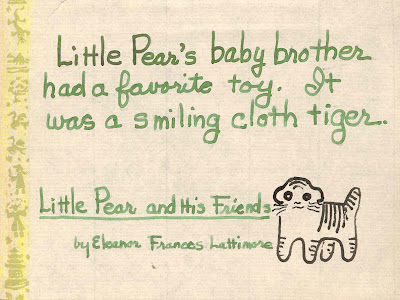 I'm really impressed by the time, thought, and talent that went into these drawings. The young artist used special, thin paper with a border that includes Asian motifs such as temples, cranes, and umbrellas, and pain-stakingly printed the text in green ink. Best of all are the illustrations, which not only faithfully reproduce Lattimore's pen-and-ink drawings, but add subtle and appropriate color.

Unfortunately, the artist never signed his or her name. Maybe this was just a kid's hobby, like copying Fred Flintstone and Blondie from the Sunday comics and spraying them with Aqua Net. Or maybe this was an early attempt by someone who has since gone on to great fame as a contemporary children's book illustrator. I guess we'll never know for sure...but it's fun to think about.
Posted by Peter D. Sieruta at 1:43 PM

god this is soooo coool. thanks for sharing!