A couple days ago I talked about my surprise at learning Joan Blos lived right across the street from my friend's parents -- and how I missed my one-and-only opportunity to become BFF with this Newbery-winning author.

It's true, I've never had a personal meeting or conversation with Joan Blos -- but I have, in fact, crossed paths with her on a couple of occasions.

A GATHERING OF DAYS was another of those surprise winners of the Newbery Medal. I don't remember the book getting much talk or attention in the days before the award. In fact, when I heard it won the Newbery, I had to consult a book review journal to find out what the novel was about. (Evidently, I didn't realize the subtitle "A New England Girl's Journal, 1830-32" pretty much explained the whole thing.) Then I had to run out and track down a copy. 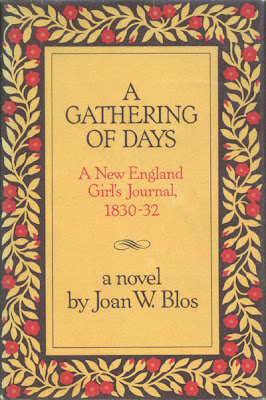 A month or so later I heard that Joan Blos was going to be speaking at a children's author luncheon in one of Detroit's snootiest suburbs. I'd never met an author in my life -- much less a Newbery-winning author! -- and was anxious to attend. But then I talked to someone who had attended a previous children's author luncheon. She told me, "You won’t fit in. The audience is mostly wealthy, suburban matrons like in that song 'The Ladies Who Lunch.' You'll be the only male there -- and the only person under forty." I could

just picture all the women in their fancy hats air-kissing each other's cheeks and me -- the lone, young guy from Motown -- fitting in about as well as Misty of Chincoteague at the American Library Association Conference. (Sure, nobody minded that Misty attended, but did anyone REALLY want to sit directly behind her?) I feared I'd make a similar impression at this fancy luncheon as I drank soup directly from the bowl or used my sleeve as a napkin. I definitely needed a support system, but who could I take with me? All my friends were as uncouth as I was...besides, they had no interest in children's books. Then I came up with a great idea: I'd invite my mother! She didn’t have a big interest in children’s books either, but at least I’d have someone to talk with. Plus she could kick me under the table if I used the wrong fork for the salad.

The big day came and, sure enough, I was the only male and the only person under forty in this huge banquet hall. Joan Blos sat at the dais with other dignitaries and my mother and I were seated at a table with several “ladies who lunch.” Directly across from me was an old, old woman wearing a hat. She asked why I had come to the luncheon. (She probably thought I was accompanying my mother, instead of the other way around.) I told her that I was a big fan of children’s books, wanted to write for children some day, and that I was very excited to see a real-life author for the first time in my life. (I pointed at Joan Blos when I made that last remark and my mother kicked me under the table. Polite People Don’t Point.) The woman sitting next to the old, old lady said, “Did you know you’re talking to another ‘real life’ author right now? This is Elizabeth Upham, who wrote the Little Brown Bear books.”

I had to admit that I wasn’t familiar with those books. Mrs. Upham and her companion explained that the Little Brown Bear books were a series of popular picture books published by Platt and Munk in the 1940s and 1950s; she had also written books about a “Little Brown Monkey” as well as some stand-alone stories. 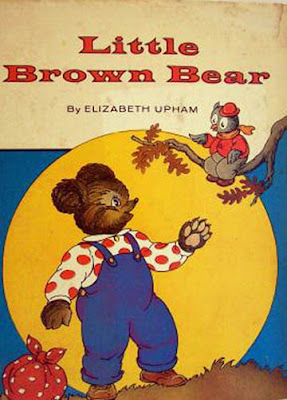 At that point Joan Blos rose to begin her speech, so I didn’t hear much more about Elizabeth Upham’s books, but before we all got up to have our copies of A GATHERING OF DAYS signed, Mrs. Upham handed me her paper napkin and asked me to sign it “so I’ll have your autograph when you’re a famous author.”

I was surprised (and embarrassed) by her request and, as I signed her napkin, my mother kicked me under the table again and mouthed-out the words, “Ask for HER autograph,” which of course I should have done in the first place if I had more presence of mind and wasn’t a) male, b) very young, c) very, very out of place at this suburban banquet.

A few minutes later I stood in front of Joan Blos, holding out my copy of A GATHERING OF DAYS to be signed. I didn’t really speak to her, but was thrilled to get the book signed. Funny, though, that I’d walked into the luncheon thinking she’d be the first author I’d ever meet and get an autograph from -- but she ended up being second. Elizabeth Upham turned out to be first!

…In the years since then, I’ve looked all over for that signed paper napkin but, unless it’s crumpled in some corner of my filing cabinet, it appears to be lost. I regret that so much. Though I may not have written proof of my encounter with Elizabeth Upham, at least the memory still survives.

(Incidentally, although I recall Mrs. Upham as being very, very old, she went on living for many more years, dying at age 99 in early 2004. You can follow this link to see an article about her and the bronze statue of Little Brown Bear which now sits in front of the Dorsch Memorial Branch Library in Monroe, Michigan: http://historicmonroe.org/little-brown-bear/index.htm. )

A good ten years had passed since that luncheon. A local chain store announced a children’s book event that would include appearances by a children’s book editor, a book agent, and author Joan Blos. It was held on a Sunday evening after the store closed. By this time in my life I was secure enough to go to such things alone –- even though I was usually still the only male and the youngest person in the crowd. The high point of the evening for me was during Joan Blos’s speech, when she opened up a square leather case, removed her Newbery Medal and passed it through the audience. Passed hand to hand, by the time it got to me, the medal was warm to the touch. I studied the illustrations on both sides of it and then held it reverently for a moment or two, thinking I probably wouldn’t be holding one of these again unless I someday EARNED it. Then I reluctantly handed it to the person sitting beside me.

Later, as I drove home, I wondered if passing that medal around the audience had really been a good idea. Hadn’t Ms. Blos ever heard those urban legends about people who win the big lottery, then go to a bar and pass around the winning ticket for every one to see? By the time the ticket gets back to its owner, someone has pocketed the million dollar winner and substituted a losing ticket in its place.

Can you imagine the same thing happening with the Newbery Medal? The award gets passed through the audience, then handed back to the author who, without really looking, tucks it back into its leather case. Later on she looks inside the case and yelps, "Hey, where did this hockey puck come from?" Meanwhile, a children’s book collector is writing in his blog, “You’ll never guess what one-of-a-kind item I just added to my collection today!” 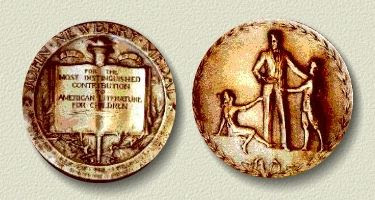 Why the book may be collectable:

It's a Newbery winner.

Of interest to those who collect historical novels.

It's frequently studied in school and may be fondly remembered by some students.

Bound in red cloth with gold print on spine; the author's initials, JWB, are embossed ond the front panel.

The following printing sequence is at the bottom of the copyright page:

For some reason this book is not as hard to find as many other Newbery winners. I have seen copies in the $35-75 range.
Posted by Peter D. Sieruta at 12:03 PM

Off-topic: Found your entry about TAP DANCING ON THE ROOF and wanted to thank you! I have just blogged about your blog on my blog. ;-) Also wanted to be sure you saw my last comment re the Double Shard.

Thanks again and all best,
Linda Sue Park

You're welcome. I was happy to do it because I love TAP DANCING ON THE ROOF and think this unique volume needs a wide audience. I saw your new novel at the bookstore tonight and may write about it here as well. Stay tuned!

Thanks for dropping by -- and for mentioning my blog on yours!