Bands of Gold (and Orange) 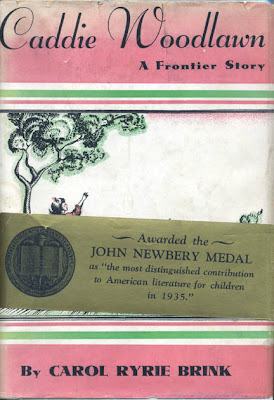 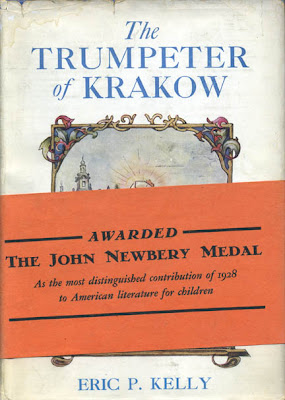 Have you ever seen a book wrapped in a paper band announcing the Newbery Award? I have two in my collection, but they are the only two I've ever encountered.

I'm wondering if this was simply an advertising technique created by the publisher (Macmillan published both TRUMPETER OF KRAKOW and CADDIE WOODLAWN) or if these bands were somehow sanctioned by the American Library Association in the days before foil stickers were added to the dustjackets.

I'm not certain when the use of stickers began. I'm pretty sure the earliest Newbery sticker I've ever seen was on the 1935 winner DOBRY -- but, if that's the case, the following year's winner, CADDIE WOODLAWN, should have had a sticker too, instead of this band.

Certainly a sticker glued to the front of a dustjacket is much more permanent than a band wrapped around a book. If a sticker comes off, it generally leaves a skinned spot on the jacket or a circular shadow...but if these rather ephemeral bands broke apart or became separated from the volume, who'd know they were ever there to begin with? It's almost amazing that both these have survived intact for over seventy years. I'm so glad that I'm able to preserve this part of children's book history.

I'm curious if other Newbery bands exist. If anyone else has an example they'd like to share, please send a jpg to Newbery13@aol.com and I'll post it on this blog.
Posted by Peter D. Sieruta at 8:08 AM