Spoiler alert: This blog entry contains "spoilers" for the novel OLD YELLER. If you have not yet read the book or seen the movie, you might want to skip the following. 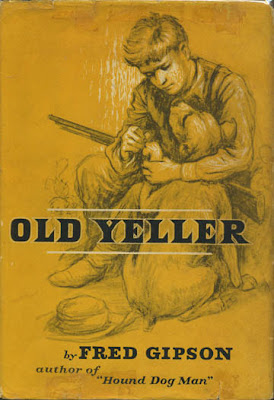 A few years ago I was visiting a friend and, as we sat talking, I could hear the sounds of a barking dog coming from the family room, where his five-year-old son was watching videos. A couple minutes later, the little boy yelled, "Daddy, how does OLD YELLER end?"

My friend, always blunt to a fault, shouted back: "The dog dies."

A moment later, I heard the TV switch off and then saw my friend's son go outside to play in the yard.

Smart kid, I thought. He knew enough to ask.

Even though he was only five, he'd seen enough movies and TV shows to know that a loving canine companion rarely makes it to the final credits. I certainly didn't know that at his age. In fact, no matter how many dog stories I read as I was growing up, I never did learn that lesson -- and always began each new animal book with the naive belief that a happy ending lay in store. Which was why I stupidly took OLD YELLER to school with me in eighth grade (yes, I still hadn't learned that lesson by eighth grade!) and read the heartbreaking scene where the young protagonist must shoot his dog just before the bell rang at the end of class...then had to pretend I was catching a cold as I blew my nose all the way to my locker.

Many years passed before I acquired a copy of this book for my collection. Once, after ordering some books from a catalog, I sent the book dealer a list of titles I was still seeking; one of them was OLD YELLER. The next time this dealer came to Michigan for an Antiquarian Book Fair, she had two copies of the book to offer me. Both were the same price -- $125.

One was in a dull dustjacket with small tears at the top and bottom of the front panel. Someone had tried to repair these tears with tape, and though the tape had now been removed, its shadows remained. The top of the spine was chipped, the bottom of the spine had an open triangular tear and the second "E' in YELLER had a white scratch across it. The back panel had some light surface oil and a black skid mark coming right down the middle. However, the book was signed by the author!

The second copy was presented in a bright yellow dustjacket pristine in every way (no chips, tears, tape shadowing, or skid marks.) However it was unsigned.

What a dilemma! A dingy copy that had once been signed by the author or a perfect unsigned copy. I debated and debated, remembering how the appraisers on the Antiques Roadshow always say to get an item in the best possible condition, since condition is all-important. Still, how many copies of OLD YELLER did Fred Gipson sign? Wouldn't it be smarter to get a copy he'd actually held in his own hands and written in, despite its physical imperfections?

The previous blog entry describes how I emulated the behavior of my Aunt Tony when visiting a bookstore. Now I was following in the footsteps of another relative, Aunt Gerry, who was once given twenty-five cents to buy a quarter doll. They were called "quarter dolls" because that's what they cost. (This was in the 1920s, before the Depression; during the Depression the family didn't have twenty-five cents for food, much less dolls.) Aunt Gerry took her twenty-five cents to the store and looked carefully at the display of quarter dolls, each dressed in a different outfit. The doll that had the nicest dress also had a cracked head, so Aunt Gerry had to choose between nice dress/cracked face or tacky dress/intact face. Her family was surprised when she returned home with a beautifully dressed doll whose head was cracked in two. Now I was faced with a similar dilemma: an unsigned book in perfect condition or a signed book with a damaged dustjacket.

What would you do? To find out which book I chose, scroll down to the end of this blog entry.

I must say that finding a first edition of this book in any kind of condition was lucky. It's a true classic. The fact that it's a Newbery Honor Book almost doesn't matter: when I see the silver Newbery Honor sticker on later editions of titles like OLD YELLER, CHARLOTTE'S WEB, and some of the Laura Ingalls Wilder books, they almost seem out of place, as if those books are so well known on their own merits that Newbery recognition seems unimportant and unnecessary.

The novel is recognized as a classic book.

Made into a good Disney film.

This is another Harper book that contains only vague edition information. The book is bound in green and black (spine edge) cloth. The copyright page states "1956" and contains a Library of Congress catalog number. The dustjacket has a price of $2.75 at the top of the front flap and "No. 7042-A" on the bottom of that panel. (No. 704
3-A is on the bottom of the flap.) The back panel has "No. 4769" printed at the bottom.

Rather difficult to find, though a few copies are listed online running from about $70 (which seems rather low...if they match all first edition points) up to $750, which seems a bit high. I'd say $125 to $200 would be a fair price for a true first edition.

Oh, and this the copy I ended up buying:

I'm enjoying your blog. I would have bought the autographed copy in a heartbeat!

Thanks for the comment. I think I made the right decision too, though there was a moment there, when I held the grubby-but-signed book in my left hand and the bright yellow pristine copy in my right hand when I really wavered....

I enjoyed your comments about Old Yeller. My brother just bought me a first edition (after a lengthy search) to celebrate adopting my first dog, a mountain cur found on the roadside - dumped probably because of a neurological condition rare to all breeds. I will certainly treasure this book!