The other day my father got locked in the basement for a couple minutes. Back when I was in junior high, my mother got locked in the bathroom for an entire afternoon. (“So I decided I’d just take a long, leisurely bath until someone came home and let me out,” she calmly reported -- after someone came home and let her out.) Both my parents have the ability to remain composed in such situations. Not me. Five minutes trapped in a basement or bathroom and I’d be battering down the door with my shoulder -- or die trying. I don’t know where my severe claustrophobia came from (it’s obviously not genetic) but I sometimes wonder if this phobia wasn’t fueled, at least in part, by reading THE GIRL IN THE BOX by Ouida Sebestyen. 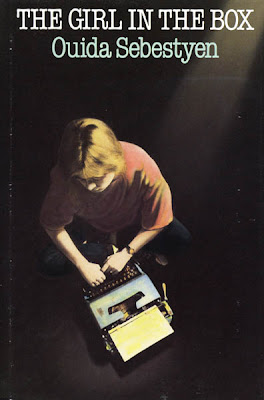 Jackie McGee is an everyday teenager whose life is turned upside down when she’s abducted off the street by a stranger. Locked in a dark, basement-like room, she writes notes:

TO ANYONE WHO FINDS THIS

My name is Jackie McGee.
I am close by. In something like a cellar.
Find me.
Please contact the police immediately.
So they can tell my parents I’m alive.

which she slips through a crack in the door, hoping they will be found. She also types letters to family and friends, records her memories, and describes her current circumstances in journal form. As time passes, Jackie’s desperate prose reflects the well-known stages of grief -- denial, anger, bargaining, and a certain acceptance of her possible fate.

As a story of contemporary random violence, THE GIRL IN THE BOX is a harrowing read. ...Yet because the basic premise is so unlikely -- Jackie just happened to be carrying a typewriter and ream of paper when abducted -- and because she has recently suffered the painful dissolution of close friendship, the reader is left to consider the equally frightening possibility that the novel is actually the dark fantasy of a troubled teenager. In either case, the emotional content is heart-rending and Jackie’s courage in the darkness is unforgettable.

Ouida Sebestyen burst into the field of children’s and young-adult fiction in 1979 with WORDS BY HEART, a rare juvenile novel to be selected as a Reader’s Digest Condensed Book. She also published FAR FROM HOME (1980), IOUs (1982), and ON FIRE (1985) and was considered such a major voice in young people’s fiction of the era that an entire monograph was devoted to her life and work (PRESENTING OUIDA SEBESTYEN by Virginia R. Monseau, published in 1995.)

Because most of Sebsetyen’s earlier books dealt with historical or rural themes, THE GIRL IN THE BOX, with its urban setting and contemporary voice, is something of a wild card among the author’s novels. She only wrote one more book after this (OUT OF NOWHERE, 1995) and over the past decade, nearly all her work has gone out of print. It’s hard to believe that THE GIRL IN THE BOX isn’t at least still available in paperback. Knowing how many young adults have a taste for dark, “real life” narratives, I’m shocked that this book has not been embraced by today’s teenage readers. It’s an edgy, unforgettable young adult novel that deserves rediscovery.


THE GIRL IN THE BOX
Written by Ouida Sebestyen
Published by Joy Street Books/Little Brown, 1988.

Why the book may be collectable:

Sebestyen was considered a major writer of the late twentieth century.

It’s an example of using an unusual format to write what could have been a standard “problem novel.”

It's an example of a literary novel that can be read on two different levels: is Jackie's isolation real or metaphorical?

First editions can be found for about $30-$40. Inexpensive paperback copies are plentiful for those who just want to read this harrowing story.
Posted by Peter D. Sieruta at 1:03 PM