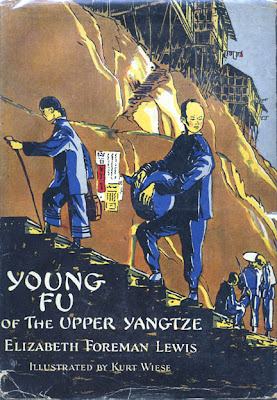 When I was growing up, our local branch of the Detroit Public Library owned most of the Newbery Medal books, but the 1933 winner, Elizabeth Foreman Lewis's YOUNG FU OF THE UPPER YANGTZE, was missing.

I never even saw a copy of the book until I visited my aunt in Ann Arbor and she let me check the book out of the Ann Arbor Public Library on her card. At the time, I was not too impressed with this story of a boy who leaves his small Chinese village to become an apprentice coppersmith, finding the story episodic and the protagonist rather annoying as he gullibly stumbles into one scrape after another. I haven't read it since, but it would probably be a good idea to pick it up again -- especially since a friend recently told me this was her favorite book when she was growing up. So maybe I missed something the first time around.

As as adult, I've found YOUNG FU to be one of the hardest Newbery first editions to identify. The publisher, the John C. Winston Company, never did a good job of indicating first editions...and if it weren't for a couple "missing" elements, a first edition of this book would be nearly impossible to identify.

The only way to know for certain if a copy of YOUNG FU is a first edition is to flip to the page that comes between the "CONTENTS" and "ILLUSTRATIONS" pages in the preliminary section of the book. If the page looks like this: 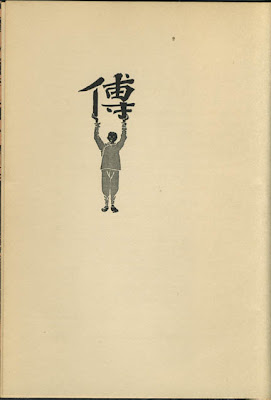 then you do indeed have a first edition. For some reason, the dedication, originally set to appear on this page, did not make it into the first editions.

This was corrected in later printings. Therefore, if your page looks like this: 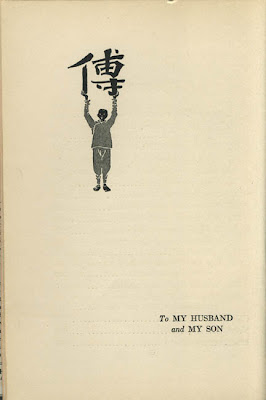 you have a second printing or later.

Another missing element can be found (er...not found) on the dustjacket. The dustjacket of the true first edition has absolutely nothing written on the front or back flaps, except the $2.50 price at the top of the front flap. Later printings contain the customary book summary/description on the front flap, though they too leave the back flap blank.

In my experience, most booksellers are not aware of these missing elements...so if you see a "first edition" for sale it's important to ask the seller if the written dedication and front flap description are present. If they are, you are "missing out" on obtaining a true first edition of YOUNG FU OF THE UPPER YANGTZE.
Posted by Peter D. Sieruta at 8:30 PM