Last Sunday night I was watching television when I heard a tremendous CRASH. I raced to the window to see if someone had hit a car outside, then looked around inside thinking that maybe a picture had fallen off the wall. Two nights later I heard a loud BANG. It sounded like someone had hit the window with a snowball, but I could see no one outside. Again, I poked around the house, even checking inside the refrigerator to see if a can of pop had exploded -- but nothing turned up to explain the loud noise. So I thought what any other calm, rational, intelligent adult would think: maybe it's a poltergeist!

Like many kids, I grew up reading lots of supernatural stories filled with screaming ghosts, spell-casting witches, and creepy moonlit seances...yet the horror story that continues to haunt me is one of the most subtle -- an enigimatic novel that blends unexplained supernatural activity with a convincing story of family dynamics and personal isolation. Although published as a young adult novel, I discovered THE ALMOST YEAR by Florence Engel Randall in the 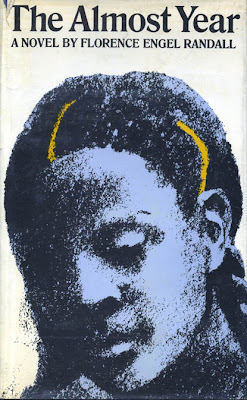 adult section of our local public library. Back then, kids couldn't check out adult books unless the title on the back pocket had a minus sign in front it. Now I find that odd. Why not a nice inclusive plus sign, indicating that the book was for adults plus younger readers, instead of a demeaning minus symbol that seemed to say the book was something less than an adult book? But back then I didn't think of such things. I was just glad to see the typing on the pocket said: "Randall, F. --Almost Year. c.1" and know that I could check it out.

With or without a minus sign, THE ALMOST YEAR turned out to be a captivating novel about a fifteen-year-old African American girl sent to spend a school year (an "almost year" consisting of fall, winter, and spring) with a white, upperclass family on Long Island while her aunt-guardian takes a job in another state. Angry and isolated, the teenager's arrival at the Mallory home is met by a shower of stones hitting the roof of the car and the driveway. Racist neighbors protesting her arrival? A trick being played by the Mallory children? Neither. During the course of this "almost year," stones pelt the house, doorbells mysteriously ring, food flies off dinner plates, and the grandfather clock chimes thirteen times. The unexplained activity climaxes one winter night when the family is snowbound. (Nothing good ever happens in a snowstorm; see my previous blog entry for details.) During this night, footsteps and pounding resound from the attic bedroom where the young narrator sleeps. She believes she is responsible for this turmoil, but cannot control it.

Back when SOUNDER was published in 1969, some readers were offended that the African American protagonist went unnamed. THE ALMOST YEAR is another novel in which a black protagonist is never named, though this literary device does play up the character's isolation and could even be a nod to the most famous gothic novel of all, REBECCA by Daphne DuMaurier. Certainly this book echoes DuMaurier's classic in its depiction of an underprivileged outsider feeling overwhelmed and somewhat diminished by her new home especially because,in this case, the protagonist believes (perhaps incorrectly) that the Mallorys are operating out of some kind of noblesse oblige instead of kindness.

In THE ALMOST YEAR, Florence Engel Randall created the perfect marriage of family "problem story" and literary horror novel. Though the scenes of crashing rocks and tumbling stuffed animals will raise goosebumps, this is ultimately a story about self-discovery, individual growth, and the need for reaching out. The protagonist's rage -- so strong that it probably could cause psychic phenomena -- eventually quiets as she matures. She learns to accept the well-meaning but flawed members of the Mallory family because she has learned to understand herself.

By 2008 standards, THE ALMOST YEAR may be a bit dated in terms of language ("groovy") and its presentation of race relations, but the emotional lives of these characters still ring true and the scenes of supernatural upheaval continue to pack a subtle but strong punch.


Why the book may be collectable:

As an example of literary horror novels for young people.

As an example of how racial issues were tackled in children's books in the post-Civil Rights era.

May be of interest to collectors of African American stories and supernatural stories.

May also be of interest to those who have read the author's most well-known children's book (later a movie), THE WATCHER IN THE WOODS.

Bound in blue cloth with gold lettering. The date "1971" is on the title page and "First edition" is written on the verso.

Most seem to have been swallowed up by the library market, as the majority of copies for sale are "ex-lib." An occasional non-library copy turns up, usually selling for about $50.
Posted by Peter D. Sieruta at 10:13 AM

Fairly good post. I just stumbled upon your weblog and wished to say that I've actually enjoyed studying your weblog posts.Any way In poor health be subscribing to your feed and I hope you publish again soon.