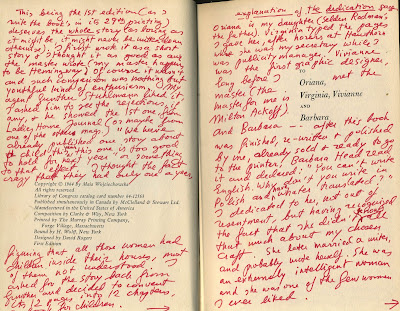 I've been told I'm "difficult to buy for." So when gift-giving occasions roll around, my family will often give me money and instruct me to "go buy something you like." Then I wrap it myself and try to act surprised on my birthday or Christmas morning.

This Christmas, when my parents wrote me a check and told me to "go buy something you like," I knew just what I wanted. I had seen an inscribed copy of Maia Wojciechowska's SHADOW OF A BULL for sale on the internet, but couldn't afford it. Now, thanks to my parents' holiday generosity, I could!

Maia Wojciechowska (1927-2002) was born in Poland, but lived all around the world before settling in the United States, where she embarked on a variety of careers (I believe she listed both "hairdresser" and "private investigator" among her professions at one point.) She wrote one early picture book, MARKET DAY FOR TI ANDRE, but didn't really burst into the field of children's books until 1964 when she wrote SHADOW OF A BULL, which went on to win the Newbery Medal. After that, there was no stopping her, and she seemed to have no literary limits as she bounded from one genre to another, writing young adult novels (both her drug novel TUNED OUT and her seriocomic monologue DON'T PLAY DEAD BEFORE YOU HAVE TO were big hits; I remember teenagers carrying the paperbacks around back in the early 1970s), biographies (ODYSSEY OF COURAGE), middle-grade books (HEY, WHAT'S WRONG WITH THIS ONE?), a surreal Alice in Wonderland tale (THROUGH THE BROKEN MIRROR WITH ALICE), and even an odd volume called THE ROTTEN YEARS that was less a work of fiction than just a vehicle for sharing her offbeat political and social views with young readers.

Like many highly creative people, Maia Wojciechowska was clearly an eccentric. I once took a trip to the Kerlan Collection at the University of Minnesota and read a file of letters Wojciechowska had sent to publishers, friends, and many other unsuspecting folk. Her correspondence was pushy, combative, and often very funny -- and I came away thinking, "What a character!"

Not surprisingly, Wojciechowska was not the type to sign her books with a simple signature or a mundane comment such as "Best wishes." The inscription in my Christmas copy of SHADOW OF A BULL runs -- get this -- seven and a half pages! In this fascinating commentary, she describes how she came to write the book, how it was received by the famed editor Jean Karl at Atheneum, and why she ultimately quit writing children's books. On the last page of the novel, she crosses out the word "companionable" in the sentence "Then in companionable silence he and the doctor watched Juan Garcias, fourteen, and the bull Castalon the Second make bull-fighting history," saying that the editor had added that word and she always hated it. After many, many printings Atheneum finally agreed to delete that word from the last page. However, if you're lucky enough to have a signed early edition of this novel, you'll see that Wojciechowska either erased it or crossed it out from every copy she encountered; she seemed to regard that as one of her missions in life.

Also, on the last page of the book, Wojciechowska describes her reaction to winning the Newbery. She said that when she received the telephone call saying, "I have the great honor...." she responded, "F*** off, Seymour, I've got work to do." That must be one of the strangest responses ever to winning the Newbery. I'm so glad she immortalized it in this inscription (who would believe it, otherwise?) and so glad to add her book -- this year's favorite Christmas present -- to my shelves.
Posted by Peter D. Sieruta at 10:20 AM

What a delightful holiday story! Thank you for sharing it.

You'll have to ask about my Terry McMillan autographed book story one day.

I've never read any of her books, and now I want to! Incredibly interesting look at this author.