Growing up with the Newbery 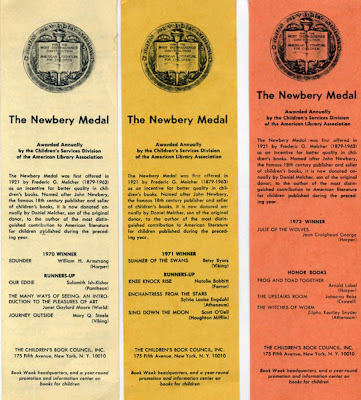 I once read a Shirley Jackson story that had the most perfect ending.

No, not that story.

This was Jackson writing in her jolly-housewife mode (LIFE AMONG THE SAVAGES; RAISING DEMONS), recounting her experiences raising four children in a Vermont college town. The story concerned the countdown to Christmas -- the gift-buying, the tree-getting, the present-hiding -- and ends with two of Jackson's children speaking simultaneously. The youngest boy says, "Next Christmas--" while his older sister says, "Last Christmas--"

I thought that moment perfectly captured the holiday spirit, with the youngest and most innocent part of ourselves already looking forward to future Christmases, while our older, wiser selves grow nostalgic for holidays past. I know I feel that way on Christmas.

I even feel that way on "Newbery Day." I always take the day off work, then get up early and sit anxiously in front of computer and telephone, waiting for the big news. Then, when it arrives, I often need to run out ("run" being the operative word, as if a thousand other book collectors and Newbery enthusiasts are snapping at my heels as we rush to locate books we could have bought last April or May if only we'd known, if only we'd known....) I remember one year in particular when I went racing out to find a copy of THE WHIPPING BOY in the middle of a blinding blizzard, car tires skidding, then having to climb through three-foot snow drifts, only to find the bookstore closing early due to the storm. But I pounded on the wooden door with ice-numbed hands and begged to be let in. The storeowner obliged and the copy of THE WHIPPING BOY I found that day still sits on my shelf. It was one of my finest (and most dramatic) moments in book-collecting.

By the end of Newbery Day, all the drama is over. I sit and think about the winning titles, dwelling on what good or bad choices they were. And I'm like those kids in Shirley Jackson's story, already thinking about "Next Newbery Day" and nostalgically remembering "Last Newbery Day."

At this point in my life, there are a LOT of Last Newbery Days to look back on. I'm not sure when the Newbery Award first drew my attention, though I do remember seeing that shiny gold seal on copies of SHADOW OF A BULL, I, JUAN DE PAREJA, and UP A ROAD SLOWLY in my grade school library...but they all looked...boring. (Years later I read them all and learned that two of them actually weren't boring.) Then came the day the school librarian held up FROM THE MIXED-UP FILES OF MRS. BASIL E. FRANKWEILER and her booktalk of the latest Newbery winner was so appealing that every kid in the class was literally sitting on the edge of their seat, waiting to run and grab the book. When the librarian told us we could get up to select a book, thirty kids all ran toward the K shelf (maybe that's where the feeling of others snapping at my heels first started) but of course someone got there before me. What a bummer. But I did have one secret weapon at my disposal: I was a frequent user of the public library. So that day after school I walked to the public library in the rain, checked out their copy of THE MIXED-UP FILES and have continued to read and love every subsquent Konigsburg book -- and every Newbery book! -- since then.

My favorite Newbery years were the early 1970s. A lot of people today believe that the selection of the award has always been a very secret, cloistered process, with no one outside the committee having any idea what books are being considered. This was not always true. For about four years in the early 1970s, the American Library Association decided to try an experiment, publishing lists of all the books "nominated" for the Newbery and Caldecott awards. Don't believe me? Go look at old issues of School Library Journal and Horn Book from about 1972 through 1975. You'll find the lists there.

I can't tell you how exciting it was to pore over these lists every year, trying to track down as many titles as I could. I'd call the Main Library downtown (which got new books months before the branch libraries) and ask them to send certain books to my local library. (After a while the librarians at the Main Library would sigh, "Hello Peter," as soon as they heard my voice on the phone.) My world kept getting bigger and bigger, as I'd get on my bike and ride to other library branches two or three miles farther away than I'd ever gone before. Or I'd ask my parents to drive me to suburban libraries and get a guest card so I could check out other "Newbery nominees."

The world of books got bigger for me as well. The titles on these lists ranged from picture books (ever heard of HENRIETTA, THE WILD WOMAN OF BORNEO?) to nonfiction (can you imagine a book called FROGS, TOADS, SALAMANDERS, AND HOW THEY REPRODUCE wearing a gold sticker on the cover? It was nominated.) to adult books with young protagonists (LIFE IS A LONELY PLACE; IN A BLUEBIRD'S EYE.) Many of the books on these lists are long forgotten (except, perhaps, by me) while others are still read and loved today. The lists of "Newbery nominees" introduced me to authors such as Ellen Raskin, William Sleator, and M.E. Kerr (who instantly became my favorite author and, many books and many years later, became my friend.)

I guess the American Library Association decided that this "experiment" didn't work because, after the mid-seventies, they quit printing lists of Newbery nominees. It might not have worked for them, but it was a total success for me -- instilling an even deeper love of books and expanding my horizons in many ways. I wish the ALA would repeat this experiment in this new century. I can see classes getting involved in reading all the nominated titles, developing their critical reading skills and becoming enthused about books. I can see discussion groups on the internet debating the merits of the nominations. I can see increased book sales and library circulation. I really see no downside to such an experiment.

These are my memories about past Newbery Days and my hope for future Newbery Days.
Posted by Peter D. Sieruta at 7:52 PM

I read lots of Newberies as a child, and I think my favorite was Adam of the Road. I also loved Johnny Tremain, A Door in the Wall, Call It Courage, and A Wrinkle in Time.

And another book I loved was the unsung Newbery Honor, The Loner by Ester Weir. Great book which I highly recommend to anyone who hasn't read it.

To this day, I credit Ellen Raskin for making me a total book nerd. The Westing Game is one of the most enchanting books I've ever read... it captured my imagination as a kid, and reignited my love for children's literature as an adult when I was given a copy of it as a gift by an old friend for Christmas one year.

Now I'm a former kid's bookseller, and about to go back to school to be a librarian. oh man. The trouble those Newbery books have caused! :D

THAT said, it's a shame the rest of Raskin's books have gone out of print. They are all as good as The Westing Game...