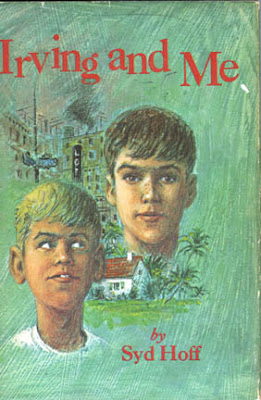 Cartoonist and author-illustrator Syd Hoff (1912-2004) wrote dozens of "I Can Read" books, including DANNY AND THE DINOSAUR, which has sold over ten million copies since it was published in 1958. His only young adult novel, IRVING AND ME, remains one of his lesser-known works, though it was named one the New York Times' best books of the year in 1967.

I first encountered this novel -- Artie Granick's first-person story of moving from Brooklyn to Florida and making friends with fellow ninth-grader Irving Winkelman -- in my local library when I was about twelve and remember laughing uproariously at Artie and Irving's adventures and being fascinated by the book's insights into Jewish culture, which was completely foreign to me at the time. The "new realism" had just arrived in the world of children's books and I recall being slightly shocked by the novel (Did he just say "hell"? Did Artie just mention that his friend Arlene was wearing a BRA?)

Reading the book today, I'm a little surprised that a book which seemed so "modern" to me in 1970 now seems a bit dated (Did he just say "negro"? Did Artie just mention that another kid was "colored"?) And the bra/ripped blouse scene which once seemed so daring now barely registers.

Nearly every children's book collection has overlapping volumes: award winners, classic stories, books that made a difference. But one thing that makes each collection different are these individual volumes that may not be award winners...may not be classics...may not be remembered by anyone else in the world...yet were such memorable library books to us as children that we end up tracking them down and adding them to our personal collections as adults. They are part of what makes each book collection truly unique and personal.
Posted by Peter D. Sieruta at 8:58 AM

Hi Peter - this Hoff book sounds like a great little find - and the blog looks fantastic- mucho congradts! am enjoying your writing,and here's to the ALA countdown.