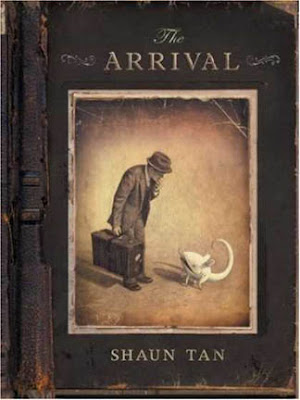 The hot book of the hour appears to be THE ARRIVAL by Shaun Tan (Arthur A Levine Books, 2007.)

Clearly this is a title that has a touched a chord with the public -- perhaps because its story is so basic and universal. In this wordless graphic novel, a man leaves his wife and child and journeys to a new land. Tan provides a fresh take on the immigrant experience, depicting a country whose bizarre fantasyscapes are filled with strange animals, peculiar foods, and unknown customs. THE ARRIVAL has been reviewed as a young adult book, a designation that seems rather random to me. I would regard it as that rare thing -- a book for all ages -- in which each generation can find its own level of understanding and enjoyment. While the youngest readers may accept the protagonist's surreal experiences at face value, older readers will understand the symbolism of an immigrant encountering a unfamiliar world with a new language, different rules, and exotic forms of commerce and entertainment. And readers of all ages will be awed by Tan's remarkable sepia illustrations, full of detail and unending imagination. THE ARRIVAL has won several prizes in Tan's native Australia, including the Children's Book Council of Australia's Picture Book of the Year Award. It has also made many "best of" lists in the United States in recent weeks.

Why THE ARRIVAL may become collectable:

It's the breakthrough book by an astonishingly gifted creator.

Those who collect graphic novels will want a copy of this important book for their libraries.

The themes of this book will appeal especially to readers in the United States which (like Australia) is mostly an immigrant nation.

The design of the oversized volume is memorable. Though it has no dustjacket, the spine and borders of the volume mimic the appearance of an antique book, with faux chips and scratches. The top of the spine even shows some webbing, as if the corner of the binding had peeled away.

Copyright information is printed in two information boxes (one resembling a postcard) on the page that faces the title page. The top box provides the original Australian copyright date of 2006. For this American edition, the copyright info is found at the bottom of the second box. The last two lines read:

THE ARRIVAL appears to be unavailable at this time, though I'm sure there are still a few first editions to be found at out-of-the-way bookstores. Make sure to check various places around the story: children's and young adult fiction, adult fiction, picture books, and graphic novel and comic books. There are some copies available from online book dealers, who have already priced them at $100 or more. I predict that this book will be highly valued by collectors and quite difficult to find in first edition in the coming years.

Note: There is one saving grace for collectors. Because its design is made to resemble an old beat-up volume, this could be a book that used bookstores underprice, thinking it has "condition problems." It could also languish on their shelves because customers may think it's too old and grubby to handle. Knowledgable collectors will know better, though, and quickly snap it up.
Posted by Peter D. Sieruta at 7:17 PM