Only My Right Frontal Lobe Exploded

One cold winter evening, Bod Owens walked over to the far end of the graveyard to visit the Collecting Children's Books Blogger. Bod always enjoyed looking at the thousands of antiquarian volumes that crowded every square inch of the Blogger's messy tomb. However, he tried to avoid looking at the Blogger himself, because there was a disconcertingly large crumbling cavity in the old man's forehead. Sometimes when the Blogger stood outside on a draughty day, wind would gust through his head causing his brains to rattle about like seeds in a dried gourd.

"It was my own fault," the old bookman explained. "I made the mistake of stating in my blog that my head would explode if THE UNDERNEATH and AFTER TUPAC AND D FOSTER won Newbery awards."

"They won." The Blogger sadly laughed, and a new crack appeared over his right eye and spider-webbed across his forehead. "Well, at least they didn't win the big prize. They were just Honor Books. So my WHOLE head didn't explode -- just the right frontal lobe."

"Yes, it could have been worse," Bod replied, thinking of some of the other denizens of the graveyard who had it much worse: Marie Antoinette...Maximilien Robespierre...Jayne Mansfield...not to mention all those poor headless teenagers who posed for the covers of almost every young adult novel published between 1995 and 2010....

Well, it's the Day After.

By now you've heard that the Newbery went to Neil Gaiman for THE GRAVEYARD BOOK.

Many of my friends in the children's book world are very excited that a book both literary and kid-friendly won the Big N. Although it wasn't my personal favorite for the year (I was a member of the CHAINS gang), I do like much about this post-modern -- or perhaps I should say post-mortem -- take on Kipling's THE JUNGLE BOOK which is, by turns, spooky, funny, and exciting. Some things about the episodic fantasy didn't quite work for me (that interminable hallucinogenic journey Bod takes with the duke and bishop and president; the Indigo Man; the Sleer) but there were also unforgettable scenes (Bod's friendship with Scarlett; the "danse macabre") that are sheer literary magic. From a collecting perspective, the book was only published on September 30 but is already in muliple printings (I've seen copies that state seventh printing) yet a large first printing and the fact that many of those copies were sold in bookstores (as opposed to ending up in libraries) bods well...I mean, bodes well for collectors. THE GRAVEYARD BOOK, which some readers are already calling a future classic, will never be one of those impossible-to-find rare books. I think that first editions will be fairly available on the used book market for many years to come.

This year's Newbery Honor Books were:

THE UNDERNEATH by Kathi Appelt
THE SURRENDER TREE : POEMS OF CUBA'S STRUGGLE FOR FREEDOM by Margarita Engle
SAVVY by Ingrid Law
AFTER TUPAC AND D FOSTER by Jacqueline Woodson

THE SURRENDER TREE took me by complete surprise! I hadn't even heard of this book until yesterday morning. I had a few problems with SAVVY, but have to admit that the book has really stuck with me in the months since I first read it -- a sign of a good storyteller. SAVVY is the first book by a fresh and talented newcomer, Ingrid Law, and I'm pleased that it received this honor.

THE UNDERNEATH and AFTER TUPAC AND D FOSTER are responsible for this cavernous new hole in my head. I've already expressed my disappointment with both titles in previous blog entries, so there's no point in repeating and repeating and belaboring my comments the way THE UNDERNEATH repeats and repeats and belabors every point with its prose. I actually do think there are "special readers" out there who will enjoy this book -- and more power to them. I just feel bad for any kids with short attention spans who might have to sit in the classroom hearing their teacher, their teacher, their teacher read this overwritten book to the class no matter how melodious -- like a song, like a bird, like a tinkling bell ringing on the breeze -- her voice, her voice, her voice may be. As for AFTER TUPAC, I found the pace of the narrative odd and the writing to be uncharacteristically weak. And while this is hardly a "literary" criticism -- and it's probably not fair to comment on it outside the context of the novel -- I have to say that I'm still bugged by one particular line of dialogue that occurs when the late rap star is on trial for sexually abusing a young woman: “’No other evidence,’ Mama said. ‘But what that girl’s saying he did....’” I hope that any victimized girl who reads this book is not silenced by the fact that she feels there is no other evidence to support her charges beyond her own words.

This one was a major surprise -- a title that I'd never heard discussed as a contender for the Printz. I'm very anxious to read it, especially since it beat out one of the best books I've ever read in my life, THE KINGDOM ON THE WAVES, the second volume of M.T. Anderson's THE ASTONISHING LIFE OF OCTAVIAN NOTHING, TRAITOR TO THE NATION. Yesterday I rushed out to find a first edition of JELLICOE ROAD, but the local chain stores only had second printings; a friend who was checking bookstores in New York said it wasn't available there at all. Luckily, my favorite independent bookstore, Bookbeat in Oak Park, Michigan, had a first edition ready and waiting for me when I arrived. No wonder it's my favorite bookstore!

In addition to OCTAVIAN NOTHING, the Printz Honor Books included:

I found Frankie a bit glib and unfocused and will reserve comment on the other two Honor Books until I finish reading them. So far I'm really loving NATION though.

This year's Caldecott Award went to Beth Krommes for her illustrating THE HOUSE IN THE NIGHT by Susan Marie Swanson. 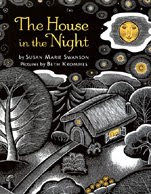 Published on May 5, this book is now in later printings and may be difficult for collectors to find in first edition.

The Caldecott Honor Books included A COUPLE OF BOYS HAVE THE BEST WEEK EVER, written and illustrated by Marla Frazee. Published in March, it may be difficult to find at this late date.

Uri Shulevitz, who won the Caldecott twenty years ago for THE FOOL OF THE WORLD AND THE FLYING SHIP, received an Honor award for the autobiographical picture book HOW I LEARNED GEOGRAPHY.

Finally, Melissa Sweet received a Caldecott Honor for A RIVER OF WORDS : THE STORY OF WILLIAM CARLOS WILLIAMS, which was written by Jen Bryant and published by Eerdmans, a small company right here in Michigan. Because the publishing house is not a New York giant and the book, released in early July, has been long out of stock for bookstores, I suspect that this may be the most difficult of all the award titles for collectors to obtain.

The Sibert Award for nonfiction went to WE ARE THE SHIP : THE STORY OF NEGRO LEAGUE BASEBALL by Kadir Nelson. 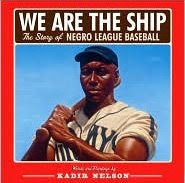 This stunningly-illustrated volume was the favorite of many for a Caldecott. Although it "struck out" there, it got its well-deserved top prize from the Sibert Committee.

The two Sibert Honor Books were BODIES FROM THE ICE : MELTING GLACIERS AND THE REDISCOVERY OF THE PAST by James M. Deem and WHAT TO DO ABOUT ALICE : HOW ALICE ROOSEVELT BROKE THE RULES, CHARMED THE WORLD, AND DROVE HER FATHER TEDDY CRAZY! by Barbara Kerley.

Although these authors have written many fine nonfiction books, they are both gifted novelists as well. Ms. Kerley recently published GREETINGS FROM PLANET EARTH and Mr. Deem's 3 NBS OF JULIAN DREW was perhaps my favorite novel of 1994.

Although I've yet to read it, I think this one one came as a surprise to many who expected Kristin Cashore's GRACELING to claim the prize. Because 2009 is the first year the Morris Award has been bestowed, this would be a good volume to collect. Can you imagine getting in at the ground floor on the years the Newbery and Caldecott began? You can get on the ground floor of the Morris Award this year!

Those who read Sunday's blog may wonder if all my internet searching and hunting paid off with advance word on any of the winners. Believe it or not, it did! Putting our heads together, a couple friends and I figured out two of the winners through clues we found on the web Sunday night. Which ones? I'll never tell!

Waiting for the awards on Monday morning was exciting, but ultimately frustrating. My old computer and dial-up internet connection didn't allow me to watch the live broadcast, but I was able to follow the Twitter feed...which worked great until it shut down just before the announcements of the top two prizes. Arrrgh!

Someone gave me pause to think yesterday when they mentioned that all the pre-award internet buzz about certain books being "shoo-ins" for this or that award may have unintended consequences. My correspondent suggested that this speculation usually gets back to the authors, who end up shattered on Awards Day when their books aren't recognized. There is some merit to that remark. Still, perhaps there is some consolation in knowing that a great many readers out there supported one's book and were hoping it won. And there's always the future....

Award Day: a time of broken hearts and exploded heads.

But also a day for celebrating children's books in all their variety.

Congratulations to ALL the winners past, present and future.
Posted by Peter D. Sieruta at 10:44 AM

not to mention all those poor headless teenagers who posed for the covers of almost every young adult novel published between 1995 and 2010....

I'm pleased that Neil Gaiman ... I was unfamiliar with him until I came across so many of his books at www.bookins.com, where I pick up most of my books and DVDs these days. I'll have to add his winner to my want list!

Your parody of "Graveyard" had me in stitches.

Great blog... I really like The Gaiman book....but oh, I wanted to gag, gag, gag when I tried to read that boring, boring, boring Underneath. But if everyone liked the same thing, that would be seriously boring, not to mention a little strange and creepy. mk

Maybe the Wizard could help you out brainwise. Just ask the Scarecrow.

Long-time admirer of this site. Love it. I was glad to read that we shared the EXACT same opinion of "The Graveyard." Here's my reaction to the news (which was something better than a frontal lobe explosion).

Although I am a big fan of Curse as Dark as Gold and of Graceling, the former has much more character development. However, I look forward to more from both talented authors.