Something is Not Right : A Madeline Mystery

In an old house in Paris
that was covered with vines
lived twelve little girls in two straight lines.

In two straight lines they broke their bread
and brushed their teeth
and went to bed.

Yes, these two lines of girls are one of the most indelible images in children's books: 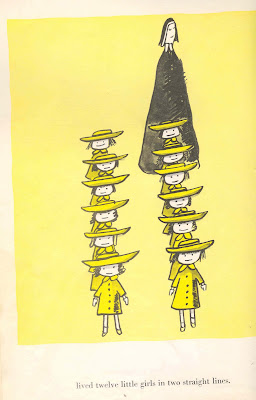 These dozen girls live happily together until Madeline, the smallest and most daring of the group, suffers a health crisis that awakens their guardian Miss Clavel:

In the middle of the night
Miss Clavel turned on her light
and said, "Something is not right!"

Readers will remember Madeline's trip to the hospital via ambulance and the happy morning when the eleven other girls, bearing a single flower each (Clavel carries the vase) visit Madeline at the hospital and see "the toys and the candy and the dollhouse from Papa" that the little patient received -- as well as her scar from appendix surgery.

At the end of the visit, the girls bid farewell to Madeline at the hospital door: 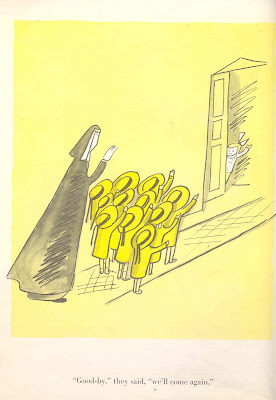 Then the eleven go home and have dinner, brush their teeth... 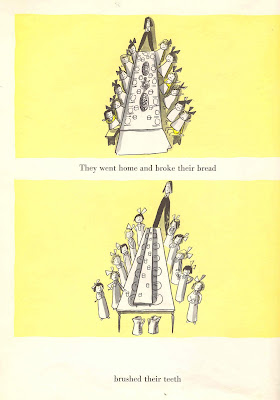 ...and get into bed. Notice Madeline's empty bed at the bottom left: 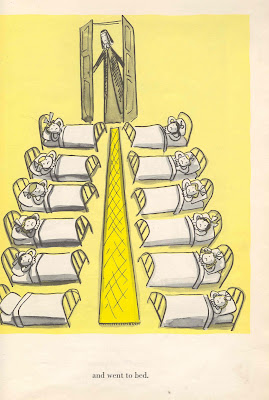 Ah, but as Miss Clavel might say, "Something is not right!"

Let's go back and look at the picture of the eleven girls sitting at the dinner table again. I'll enlarge the image a little, so it will be easier to count them: One, two, three, four, five, six, seven, eight, nine, ten, eleven... 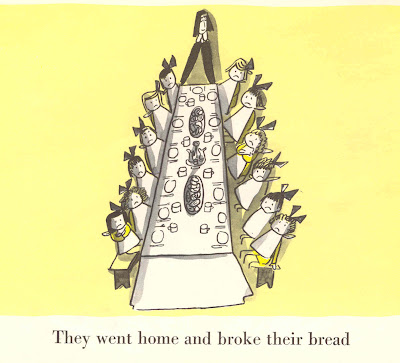 There are twelve girls sitting around the table, though with Madeline in the hospital, there should only be eleven!

Who is the imposter?

Or maybe a better question would be, how did this extra-guest-at-the-dinner-table slip past both Ludwig Bemelmans and his editors?
Posted by Peter D. Sieruta at 3:35 PM

just a couple off the top of my head:

1. henry reed's think tank: the sign on the COVER says "Grovers Corners" while every reference in the text is "Grover's Corner" (with an apostrophe and no 's' on 'Corner')

2. betsy and tacy go downtown has a picture of tib with betsy, tacy and winona discussing the play, but tib was off riding in the horseless carriage

Reminds me of the mysterious "third murderer" in Macbeth. Something sinister is going on here.

Probably just an oversight by the publisher. I noticed this many years ago.

I found this when I was looking for Miss Clavel's "Something is Not Right" song from the cartoon. I linked to you. Let me know if it's not okay and I'll take it down. :)

True, true. Did anybody ever notice thet in Madeline in London there are fourteen girls in one scene?