Tales from a Brother and Sister

Abraham Lincoln once said: "Better to remain silent and be thought a fool than to speak out and remove all doubt."

Let me update that quote for the twenty-first century: "Better to sit quiet and be called a dumb-ass than to blog and remove any doubt."

It's true. It takes a special kind of bravery to blog-away on the internet, revealing all your ignorance and lapses in knowledge -- especially since Google captures all one's mistakes and preserves them for, like, ever. Today's entry is for every children's book blogger who ever wrote about the "Newberry" Medal...or blogged about Noel "Streatfield" and Mo "Williams"...or didn't know Richard Peck and Robert Peck were two different people.

Yesterday, I was reading a wonderful recent novel (more about that in another blog entry) that contained quite a bit of information on the nineteenth-century British author Charles Lamb. At one point a character wonders how Charles must have felt "coming home from work and finding his mother stabbed to death, his father bleeding, and his sister Mary standing over both with a bloody knife."

The information is presented very matter-of-factly in an "of course we all know about that" kind of way.

Okay, here's where I reveal my own ignorance.

I didn't know anything about that.

And that's rather shameful, considering Charles and Mary Lamb are seminal figures in children's literature. 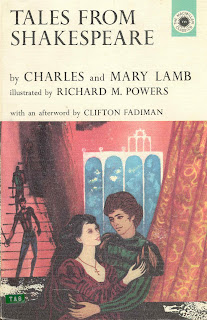 Their 1807 book, TALES FROM SHAKESPEARE, can be found in nearly every children's library and remains in print today. Heck, it's even available on Kindle! I've seen this book my entire life, but never gave it much thought. If I did, I guess I just assumed Charles and Mary were a married literary couple who got the bright idea of cranking-out Shakespeare rewrites for kids. It wasn't until yesterday that I learned their intriguing real-life story. Charles Lamb was born in London in 1775 and taught to read at a very early age by his sister Mary, who was eleven years older. A boarding-school friend of Samuel Taylor Coleridge, 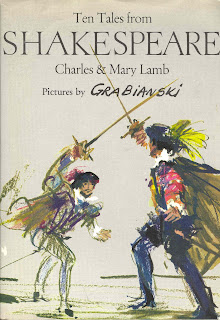 Charles left formal education behind at age fourteen, and eventually spent over thirty years working as a clerk for the East India Company while simultaneously writing essays and poetry. Both Lamb siblings suffered from mental problems. Charles spent several weeks in a psychiatriatic hospital in 1795 and kept a just-in-case-straightjacket at home to restrain Mary when she especially went off the deep end. In 1796, Mary "worn down to a state of extreme nervous misery by attention to needlework by day and to her mother at night" attacked the family maid, her father, and murdered her mother with a table knife. (Some accounts say it was a fork.)

A few modern-day researchers have referred to Mary as being "bi-polar." Who knows? It was a long, long time ago. But having always heard how deplorable things were for the mentally ill in the days before modern therapies and medications, I was surprised to learn that, after an inquest adjudged that Mary's acts were caused by "lunacy," 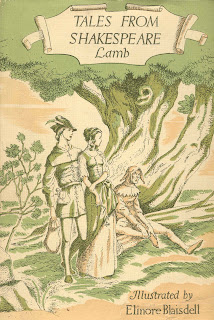 Charles was given full custody of his sister. He kept her in a private hospital for a few years and then brought her home where -- with the exception of a few stays in mental institutions when things got bad -- the two siblings lived happily and enjoyed many highly-cultured and socially-connected friends. They were even permitted to adopt a child together. As writing partners, Charles and Mary adapted twenty of William Shakespeare's plays for young readers in a collection notable for its clarity, for avoiding words and language introduced after Shakespeare's time, and for shunning the sermonizing and moralizing ubiquitous in most children's books of the era. Although Mary's name did not appear on the cover or title page of the first edition, we do know this was a collaborative effort, with Charles writing the tragedies (ROMEO AND JULIET; OTHELLO) and Mary -- ironic, considering her troubled life -- writing the comedies (TWELFTH NIGHT, A MID-SUMMER NIGHT'S DREAM.) 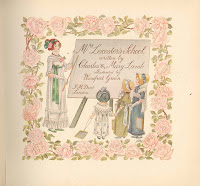 A year after publishing TALES FROM SHAKESPEARE, the Lambs released another children's book, MRS. LEICESTER'S SCHOOL. Highly praised at the time, it never achieved the classic status of TALES. Nevertheless, I'm impressed by the format of MRS. LEICESTER'S SCHOOL, which is written in the varied first-person voices of ten young girls -- similar to the multi-voice narratives we see in books by authors such as Paul Fleischman (SEEDFOLKS; WHIRLIGIG) today.

Charles Lamb died in 1834 and was buried in All Saints' Churchyard, Edmonton, Greater London. Nearly thirteen years later, his older sister was buried beside him. They share a tombstone.

As I admitted earlier, I knew nothing about the Lambs and their tragedy until yesterday. Some editions of TALES OF SHAKESPEARE do provide this backstory. Others, such as the 1946 volume I hold in my hand right now, remain discrete, alluding only to the siblings "living beneath the shadow, which never lifted, of a great family sorrow." It's heartening to realize that these two troubled individuals were able to -- at least briefly -- emerge from that shadow and, in the words of one critic, discover "one of their best consolations in breathing together the pure and bracing air of the Elizabethan poetry."

In doing so, they created a book that is still loved and read two hundred years after it was written.
Posted by Peter D. Sieruta at 10:31 AM

Blink! I did know they were brother and sister but I knew nothing about this. Thanks for sharing this story. I'm very impressed with Charles Lamb. This was extraordinary behavior for the 19th century, when people were confined to horrible madhouses for much much less. What happened to the child they adopted?

You've just reminded me that I bought, but have not yet read, Peter Ackroyd's fictional imagining of the lives of Mary and Charles Lamb, The Lambs of London. Thanks! I'm off to bed to read it now and will report back anon...

Thanks! I was wondering about the Lambs, too, when I listened to The Guernsey Literary and Potato Peel Pie Society.