Fuse #8 (AKA Elizabeth Bird), who blogs for SLJ (AKA School Library Journal) is the Queen Bee of kidlit bloggers, posting news and views on children’s books from the heart of New York City on a daily -- usually twice daily -- basis. I, on the other hand, work out of the midwest and am lucky to eke out two blogs a week. Nevertheless, for a long time I aspired to become the King Bee of kidlit bloggers. Then I remembered that there aren’t any King Bees in the hive. In fact, the male bees are called drones. What a letdown! Still, I remain competitive and try to keep up the best I can. I discovered sometime back that Fuse #8’s first blog of the day always goes online at 2:00 AM, so many nights I delay turning off my computer until that time. I sit there, drumming my fingers on my desk and looking at the clock:

Finally it’s 2:00 AM, and I click on the SLJ site for a dose of children’s book fact and opinion. This morning’s informative blog contained a discussion of endpapers, and Fuse #8 concluded with, “Think we can convince Peter from Collecting Children's Books to post some of his own collection's beauties?”

Of course you can.

In fact, instead of sleeping in till 7:30 AM...or 7:45 AM or oh-my-gosh-I’m-gonna-be-late-for-work AM, this morning I found myself jumping out of bed at 6:15 AM , standing on my tiptoes in my pajamas, pulling down books from my tallest shelves in order to find some endpapers worth posting.

So here are a few endpapers from past Newbery Honor Books that I wanted to share. You can click on the images to get a larger, more detailed view.

First up is Warwick Goble’s endpaper illustration from TOD OF THE FENS by Elinor Whitney, published by Macmillan in 1928. I like the border design especially: 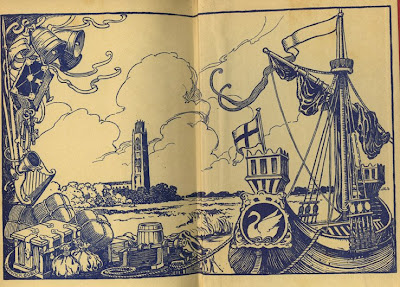 Erick Berry, who won a Newbery Honor herself for WINGED GIRL OF KNOSSOS, did these endpapers for THE APPRENTICE OF FLORENCE by Anne D. Kyle, published by Houghton in 1933. Amazing detail! I almost want to hunt for Waldo in this intricate illustration: 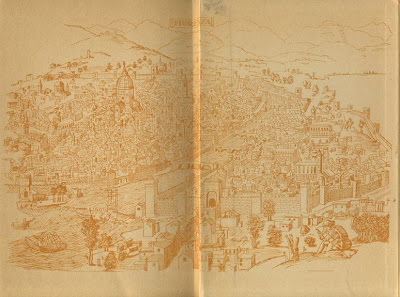 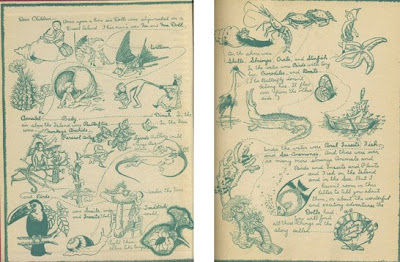 I particularly like the facial expressions and stances of the characters in this endpaper illustration created by future Newbery winner Marguerite De Angeli for MEGGY MACINTOSH by Elizabeth Janet Gray, which was published by Doubleday in 1930: 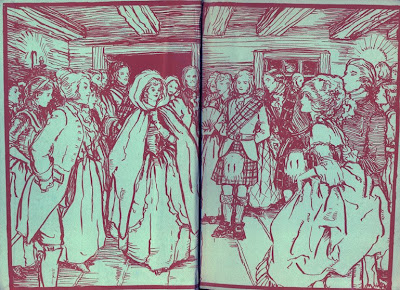 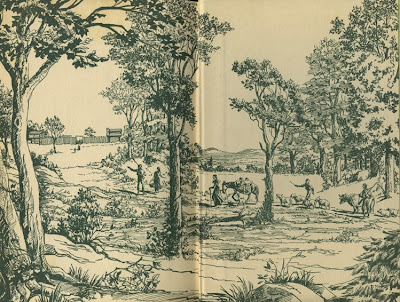 And Kate Seredy (another future Newbery winner herself) provided this atmospheric illustration to the endpapers of WINTERBOUND by Margery Biano, published by Viking in 1936: 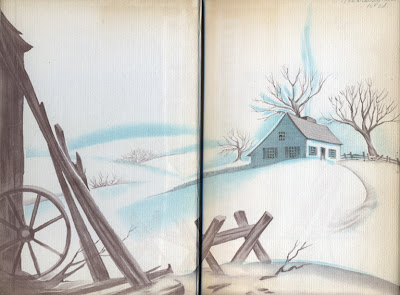 You’ll notice that all of the above endpapers were produced over fifty years ago.

Here’s another Newbery Honor from my collection, circa 1998. It’s Richard Peck’s LONG WAY FROM CHICAGO, but the actual title doesn’t really matter. Nearly EVERY Newbery Honor of the past few decades looks just like it: 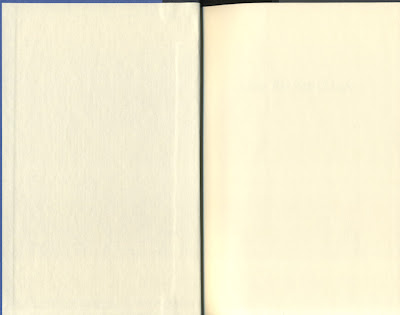 These kind of bland, interchangable and, well, dronelike endpapers make me long for the “good old days” when opening the front cover of a children’s book and seeing beautifully-illustrated endpapers made an everyday experience extraordinary.
Posted by Peter D. Sieruta at 8:35 AM

Way cool, though I must admit, I'm more partial to textured endpapers than artwork. (Have you seen GREETINGS FROM PLANET EARTH? The endpapers feel sorta like the surface of the moon looks. The Pinkney's book on Ella Fitzgerald also sport a great texture/color combo.)

At any rate, I aspire to spiffy endpapers. Though I take comfort in the fact that mine currently look just like Richard Peck's.

I quickly checked the book nearest me--Ottoline and the Yellow Cat, by Chris Riddell--and as I expected it has charmingly illustrated endpapers...

Yum yum. I love older, illustrated endpapers too and I was hoping Peter would respond to Betsy Bird's request.

Thank you for doing so Peter! I wish more books today had illustrated endpapers. They only seem to appear in picture books or in artists' books.... There are rare exceptions but they stand out for being so rare. Sigh.

Hi Peter, check out One Thousand Tracings by Lita Judge. Her end papers are fabulous & consist of the envelopes & letters to her grandparents.

Peter you're just going to fill my head so full of pleasant compliments that my ego will no longer fits through doorways. MAG-nificent piece! In the circular nature that is the web, I will of course have to blog this. And around and around we go.

Although there are no interesting endpapers, you may be interested in the fact that the South Dakota State Historical Society Press has reprinted The Jumping-Off Place, which won a Newbery Honor in 1930. Internal illustrations have been kept from the original and there is a new afterword.

I got a jolt of recognition from The Apprentice of Florence. I don’t know whether to be proud or embarrassed by this but — full disclosure! — it looks like Erick Berry and I turned to the same fresco of Florence as a guide to drawing that city. I cribbed from it, though not as literally as Berry, for better or worse, for Megan McDonald’s The Hinky-Pink.

Anyway, thanks for the look at the great design. Viva the endpaper!

We're reading Inkheart right now and its got a great bit in there that says: "Every book should begin with attractive endpapers... When you open the book it’s like going to the theater. First you see the curtain. Then it’s pulled aside and the show begins.”
How true!
(And to Brian Floca: LOVE the endpapers in "Lightship!" Viva Lightship!)
Z-Dad

Check out the endpapers on the children's book, "Traveling Man: The Journey of Ibn Battuta 1325-1354." They are truly lovely and as important to the topic as the book content. I think you'll like them!