It’s been one year since I began writing this blog.

It probably would have made more sense to start Collecting Children’s Books on January 1, 2008 -- new year, new blog. Yet there I was, spending a gray afternoon on the last day of the year, signing up for a Blogspot account and trying to figure out how to properly format a post and scan pictures onto the internet. Then I sat back and waited for visitors. Wow, was I excited to see that someone from Reston, Virginia was checking out my blog every few minutes. I had a fan! Then I realized that all AOL connections are filtered through Reston, VA and that this “fan” was just ME, logging on over and over to see if anyone else had visited. ...But, over time, I did start getting visitors from all over the world. And it was extraordinary to think that something I’d typed while sitting in my bedroom wearing pajamas was being read by someone in Dubai or Vietnam or New Zealand. True, according to the Statcounter, most of those visitors came here looking for information on “Ferdinand the Bull tattoos” and “Ashley and Mary-Kate’s new book” but, still...at least they did drop by.

As much as I enjoy writing this blog, there have been many times I’ve complained the work was too time-consuming and draining and vowed I’d give up the entire project at the end of the year. But now the end of the year is here and I no longer feel that way. Part of human nature is simple curiosity about what lies ahead. I’m anxious to know what’s going to win the book awards next month and I want to write about that. I’m curious to see how the recent changes in the publishing industry (editors losing jobs, long-time imprints shutting down) affect the future of children’s books. Are review journals on their way out (tick-tock, tick-tock) now that so many bloggers with professional backgrounds are reviewing books for free on the web? Are dependable midlist authors going to find it harder to sell their manuscripts as publishers increasingly devote their time and money to the “next big thing”? And what role is the Kindle going to play in the years ahead?

Still, the focus of this blog has always been -- and always will be -- books from the past. And there’s still so much to explore, so many mysteries to solve. In fact, I’d like to close out this year by sharing a mystery that just occured. A few days before Christmas, I received a white envelope in the mail. The return address listed a post office box in “N.K. RI.” I had not ordered any books from Rhode Island, so opened the envelope with some curiosity. Inside I found these two volumes: 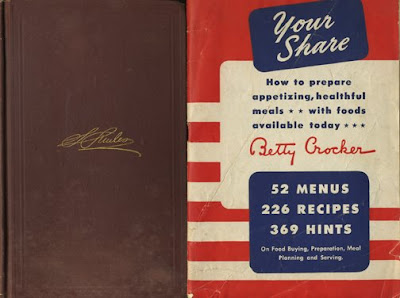 Well, I couldn’t figure this out at all! I had NOT ordered anything from Rhode Island (I later looked up a list of cities in that state and found one called “North Kingston,” so perhaps that’s what “N.I.” stands for) and I certainly hadn’t ordered an 1878 copy of SELF-HELP : WITH ILLUSTRATIONS OF CHARACTER, CONDUCT, AND PERSERVERANCE by Samuel Smiles or a Betty Crocker cookbook from 1943! There was no letter or bill of sale in the package at all. Inside the cookbook was a torn scrap of paper that said “$5.99" -- which seemed to be written on the back of an old math or science exam. A torn scrap in SELF-HELP stated “$19.95” on the back of a bridge scorepad containing the words “1st rubber, 2nd rubber” (at least I hope it was a bridge scorepad.)

It was the craziest thing.

Books just don’t randomly arrive in the mail from total strangers. Yet there I sat with two unexpected volumes in my lap.

However, since I never met an old book that I didn’t like, I have begun looking at these titles trying to find some clue to how they ended up here with me. So far I remain stumped in that regard, though I am finding some fascinating information within their pages. The Betty Crocker book (and she must be Betty Crocker Senior since she looks nothing like the lady on the frosting cans today) was published during wartime and I’m learning so much about rationing that I never knew. Take a look at this section which tells the reader to watch their “P’s and Q’s" (points and quantities) when buying meat:

Other headings state “MEAT IS SCARCE...EXTEND IT!” (accompanied by a drawing of a woman with a skillet in one hand grabbing a cow by the tail with her other hand) and “TO HELP YOUR COUNTRY, SAVE EVERY BIT OF FAT THAT COMES INTO YOUR KITCHEN!”

The book is obviously dated, with spot art featuring aproned-housewives with rolling pins and laden trays making food for menfolk who sit waiting to be served. Even the section about cooking for swingshift workers doesn’t show Rosie the Riveter, but a housewife waving her husband off to work before going into the kitchen to prepare his “refreshing, energy-giving, between-meal snack” of “tomato juice, fried slices of meat loaf, vegetable relishes, rye bread, prune whip, cookies, tea or milk.”

I also like the chapter on parties (“in war-time, more than any other time, we need friendly get-togethers to keep up our morale, give us refreshment and relaxation. But cooperation and simplicity in entertaining are necessary now”) which provides tips for a “Victory Garden Supper” and “Short Notice Weddings” (food includes heart-shaped chicken sandwiches, angel food cake, and salted nuts. No buns-in-the-oven at these quickie nuptials.) 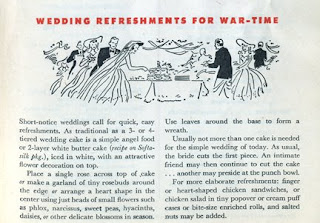 And here’s something I’ve never heard of before -- and seems surprising coming so soon after the Great Depression -- a “Hobo Party” in which the guests dress in rags, supper is served as a “hand-out” from the back porch, and the centerpiece is a “miniature artificial fire with stewing kettle over it”: 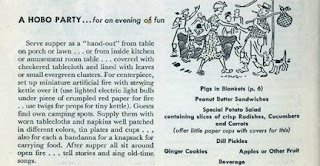 As for the SELF-HELP book (exactly who sent me this and was there a not-so-hidden message in the title?), I haven’t gotten a chance to read through it yet, but I love this inscription in the front: 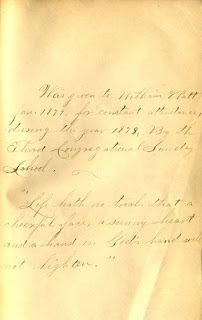 In case that spidery, perfect handwriting is too light to read, I’ll translate:

Was given to William Platt, Jan. 1879 for constant attendance during the year 1878, by the Third Congregational Sunday School.

“Life hath no trials that a cheerful face, a sunny heart, and a hand in God’s hand will not lighten.”

As 2008 draws to a close, I want to wish everyone a cheerful and sunny new year. Hope you’ll visit Collecting Children’s Books in 2009, where I’ll try to monitor present and future trends, while always looking back at books from the past and asking such eternal questions as:

Where can I learn more about wartime rationing?

Would it be considered politically-incorrect to host a “Hobo Party” today?

Who is William Platt and how did I end up with his book?

And yes, how did these two books end up here on my shelves?
Posted by Peter D. Sieruta at 1:59 PM

Best suggestion I ever gave. Thanks for sharing with the world. Every post is as enjoyable as the last. I look forward to more in 2009.

I have a book of receipts from an individual who baked cakes for weddings. Some of them from the wartime years indicate that the person ordering the cake provided their own sugar because of rationing.
A six-tier cake with added decorations to serve 125 with cake leftover cost $10.40 in 1940.
Those old cookbooks are fascinating!

I have just checked out your blog for the first time and I've really enjoyed browsing through your posts on the older books. They're so interesting to look at! Definitely a different writing style than you typically see today!

Thanks for a great year of insightful children's lit knowledge. I always save your posts until I'm sure I have time to fully read them - they never fail in bringing to light something interesting and unique. I'm looking forward to Collecting Children's Books in '09