I received some wonderful Christmas presents this year -- from a stack of socks to a box of baklava to a gift that, like the offerings in “The Twelve Days of Christmas,” will arrive at my door a dozen times next year: a subscription to Vanity Fair magazine.

For the purposes of this blog, however, I’d like to focus on the books I received, and offer up some collecting tips along the way.

On Christmas Eve afternoon, I was just putting on my boots to run out and do some last-minute shopping when a FedEx truck pulled up and brought two envelopes to my door. The first one contained this book: 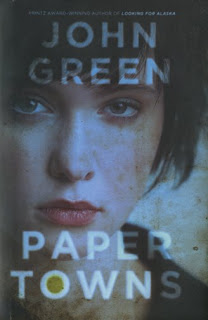 As many know, John Green’s latest young-adult novel was issued in two different editions: one with a yellow cover and the other blue/green. Earlier this year I expressed my frustration over not being able to find a copy of the latter edition. A blog-buddy who had an extra copy of the blue/green book had sent it to me and, while I’m sure it wasn’t intended as “Christmas present” per se, the fact that it arrived on Christmas Eve sure made it feel that way. I was very pleased and grateful.

COLLECTING TIP FOR PAPER TOWNS: If a book is issued with variant dustjackets and you’re a “completist collector” like me, you’ll probably want to get both editions. If you collect for investment purposes, you’ll want to get the edition with the smallest print run (I still don’t know whether Dutton did a 50/50 split on the yellow and blue dustjackets or if they really did print fewer of the dark dj.) However, if you collect simply for the love of books, you’ll of course want to get the cover that appeals most to you...after all, you’re going to have to live with this book on your shelf for a long time...so it should be one you enjoy looking at.

As the FedEx driver (who was beginning to remind me of Santa) headed back to his truck (which was starting to look like Santa’s sleigh), I opened the second envelope. It contained a sheaf of loose photocopied pages and when I turned them over I saw: 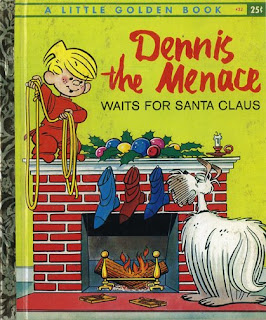 About a week ago I wrote a blog entry about owning a Dennis the Menace Christmas book as a very young child. I remembered it was a Little Golden Book but had never been able to track another copy down. I wasn’t even sure of the title. Almost immediately I received a comment from a blog-reader named Andrea suggesting the book was DENNIS THE MENACE WAITS FOR SANTA CLAUS. She was right! Now why hadn’t I been able to figure that out? When I’d searched for the book in the past, I’d used terms such as “Dennis the Menace” and “Christmas” -- but you’ll note that the word “Christmas” is not in the title of the book...which is why it never turned up. I also searched using the name of Dennis’s creator, Hank Ketcham, and (thinking I was very smart) even tried the variant spelling “Ketchum,” but that didn’t work either...because this Golden Book doesn’t even carry Mr. Ketcham’s name. The text is attributed to Carl Memling and the illustrations were done by Al Wiseman. If it wasn’t for Andrea, I may never have figured out the title of this book. And if it wasn’t for another blog-buddy, who sent me a photocopy of the book “until you track down a copy of your own,” I would not have been able to spend this Xmas with this Xerox, re-reading a holiday favorite from my childhood.

It’s funny, in my original blog entry I spoke about a scene in which Dennis and his father pick up a Christmas tree and, on the way home, Dennis says the fresh fir “smells better ‘n peanut butter.” In my mind I had a very clear memory of this and could see the tree tied to the roof of the car and Dennis sitting in the backseat. But look how different that scene is depicted in the book: 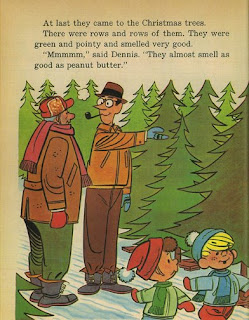 I even got the dialogue wrong! However, many many other scenes and images in the book came back to me as I read DENNIS THE MENACE WAITS FOR SANTA CLAUS. I remembered the snow outside Dennis’s bedroom window, the decorations on the walls of his house, his attempts to paint all his old toys to look like new, and especially a scene in which Dennis wakes up his parents in the middle of the night asking if he can decorate the tree and his mother lets him hang one ornament -- an apple tied with a blue ribbon: COLLECTING TIP FOR TRYING TO TRACK DOWN A BOOK FROM YOUR CHILDHOOD: Memories fade as we get older (I’m learning this the hard way!), so don’t cling too tightly to what may be a faulty recollection. And remember to try every possibility when attempting to find an old book. Don’t assume that just because a book is about Dennis the Menace and it takes place at Christmas that the word “Christmas” will be in the title. Don’t assume that, just because Hank Ketcham created Dennis and wrote the comic for umpteen years, that his name will be on the book. Always be as expansive as you can when hunting down books. I always harp on this when discussing collecting children’s book with other people and then turned around and made the same mistake myself!

The next day was Christmas and this was one of the first gifts I opened from my brother: 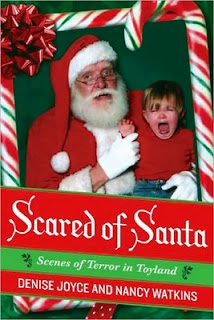 I couple weeks ago I wrote a blog entry about this new novelty book, SCARED OF SANTA : SCENES OF TERROR IN TOYLAND by Denise Joyce and Nancy Watkins, and even printed a related photo from our family album featuring my little brother: 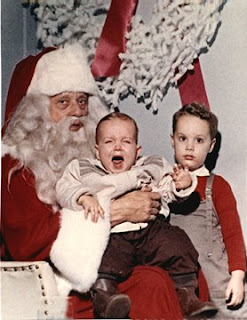 So I was not unacquainted with SCARED OF SANTA when I opened my brother’s Christmas present...but I was certainly shocked when I looked inside and found this inscription: 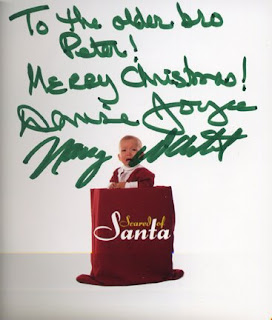 I did not realize that my brother works just a block or two away from the offices of the Chicago Tribune where Denise Joyce and Nancy Watkins serve as editors. When he read my blog entry about SCARED OF SANTA, he e-mailed Denise and Nancy and asked if he could bring over a copy of the book and have it signed. What a surprise! My open-mouthed look of shock when I saw the “older bro” inscription probably mirrored the expression on my “younger bro’s” face when he sat on Santa’s lap -- minus the tears.

COLLECTING TIP: It’s always nice when your friends and relatives get involved in your hobby. I can’t tell you how many books in my collection are signed simply because a friend or relative heard an author was appearing in their area and went out of their way to get a book signed for me. As for SCARED OF SANTA...now that Christmas is over, many bookstores are deeply discounting their remaining holiday titles before putting them away for the year. So now's a good time to pick up a discounted copy of SCARED OF SANTA (or any other seasonal book on sale) and save it up for next Christmas!

Finally, a book-buddy gave me 60th Anniversary Edition of Ruth Stiles Gannett’s MY FATHER’S DRAGON. Issued in a slipcase with a red ribbon, this edition is first class all the way: 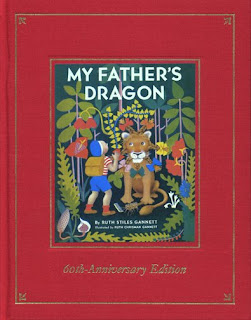 But what makes it especially noteworthy is that it’s part of a limited edition of 125 numbered and signed copies. Mine is #88: 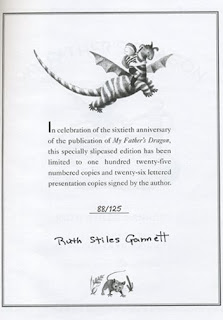 It’s rare for any book to be so well-loved that it’s reissued in a 60th anniversary edition and rarer still for it to be signed, but through a lucky confluence of events -- Ms. Gannett was both a young author (MY FATHER’S DRAGON was published when she was only twenty-five) and remains alive and well today (still signing books at age eighty-five) -- we now have a special signed edition of a classic novel.

COLLECTING TIP FOR MY FATHER’S DRAGON: The fact that so few of these slipcased, signed editions were published makes it an automatic collector’s item. Though the book was just released, I can’t imagine there are too many copies left at this point. Although somewhat pricey, it’s probably better to get a copy today than to wait and have to pay twice as much in the future -- if, that is, any collector will be willing to part with their own copy.

I won’t be willing to part with my copy of MY FATHER’S DRAGON or any of the books discussed above. I’m so grateful to have them on my shelves -- and so grateful to those who gave me these great presents this Christmas.

To misquote Dennis the Menace once again: these gifts were even better than peanut butter!
Posted by Peter D. Sieruta at 12:40 PM

There is an excellent children’s book called Other People’s Shoes. It does a great job of teaching kids the importance of kindness inside of a very captivating story. You should check it out! Here is a link: www.eloquentbooks.com/otherpeoplesshoes.html

PS almost your one year anniversary, so glad you started this.

I have some lovely internet friends who collect books, and they assisted me in collecting a book that I remembered a little snippet of. From that one part "she was in a play and lost her voice the day of auditions", came more bits and pieces from other people, within 2 days of an extensive internet search, I found and purchased said book, for $1.49.