The Bittersweet World of Book Collecting

One of my favorite scenes from a play is in CRIMES OF THE HEART by Beth Henley. The story concerns three southern sisters dealing with a succession of “real bad days” that include failed dreams, broken marriages, attempted murder, infidelity, infertility, suicide, felinicide, and a pet horse hit by lightning. It’s a comedy. In the midst of all this trauma, the sisters receive word that their “Old Granddaddy” has just suffered a life-threatening stroke -- news that sends them into gales of hysterical, uncontrollable laughter.

Trust me, it works within the context of the play.

CRIMES OF THE HEART explores the yin and yang of comedy and tragedy -- that combination of laughter and tears that comprise so much of our lives. Even going to see that show was, in a small way, a mix of happiness and sadness for me. I had ordered my ticket in the springtime, right after the play won the Pulitzer Prize, and I especially looked forward to seeing the movie actress Mary Beth Hurt, who was getting raves for her performance as one of the sisters. But by the time I arrived in New York later that summer, the entire original cast had departed. I didn’t know the new actress playing Hurt’s role but, according to the Playbill, this was her first Broadway show. That didn't sound too promising -- especially since she looked all of twelve years old in the accompanying picture. So I felt ambivalent as I sat down in the audience -- thrilled to be seeing the play...not so thrilled to be seeing it with a second-string, minor-league cast.

But as CRIMES IN THE HEART itself makes clear, life is full of experiences that are simultaneously happy and sad.

Even book collecting can be bittersweet.

I was thinking about this the other morning when I pulled my copy of Rebecca Caudill’s TREE OF FREEDOM off the shelf. After spending a couple decades searching for a first edition of this 1950 Newbery Honor Book, I finally found a copy on the internet a couple years ago. I was especially thrilled to learn it was signed by the author. And the price wasn’t bad either. I quickly mailed off a check.

About a week later, the bookseller wrote to say that my check had arrived, but he wouldn’t be able to ship the book until the check cleared at the bank. “I’m sorry to make you wait,” he wrote, “but to be honest, my business isn’t doing well and I don’t even have three dollars in my cash register to mail this book.”

The book eventually arrived, along with a note from the bookseller thanking me for my patience. It’s a great book and I was very happy to finally have a copy of my own...though every time I see TREE OF FREEDOM on my shelf I remember that poor guy with the failing bookstore who didn’t even have three dollars left in his cash register. I wonder if he’s still in business. Probably not. 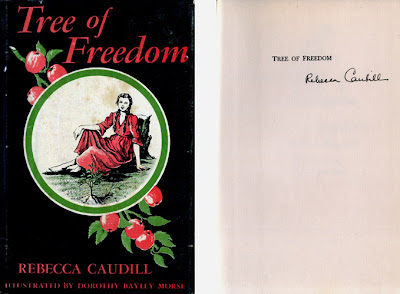 Most of the children’s books I collect are decades old. Used. Pre-owned. And as happy as I am to have them, I’m also keenly aware of why most of these books are on my shelves now.

Someone needed the money and was forced to sell them.

Someone grew up and no longer cared about them.

I’m also keenly aware that someday I won’t be here anymore and these books will move on again.

The yin and yang, the happy and sad. They co-exist, yet one lesson I learned from CRIMES OF THE HEART is that we can choose how we perceive the situation. Sitting in that Broadway theatre almost thirty years ago, listening to the MaGrath sisters howl with laughter over their troubles, I realized that attitude is everything. (I also realized that the “second-string minor-league” replacement cast was anything but. Mary Beth Who? That “twelve year old” actress who took over her role was AMAZING.)


...Oh, and that young unknown actress who made her debut as a replacement in CRIMES OF THE HEART?

Holly Hunter.
Posted by Peter D. Sieruta at 9:54 AM