Why Didn't I Think of That?

The inventor of the Pet Rock did not get much respect.

The guy who came up with the idea, a California advertising executive named Gary Dahl, made a million off that 1970s fad, but instead of getting kudos, Dahl likely heard this common response: "What a simple idea! Anyone could have thought of it." And while it's true that the idea was rather simple (A rock. In a box. With instructions on how to care for it.) and that anyone could have thought of it, the point is: no one did think of it before Gary Dahl came along. I doubt he was bothered by these complaints; he was probably too busy counting his profits.

Writers often find themselves in the same situation. They write for years, hone their craft, but hardly make any money. And people are always bothering them with that unanswerable question, "Where do you get your ideas?"

Yet when a writer does come up with a one-in-a-million idea, do they hear applause? No, instead they hear: "What a simple idea! Anyone could have thought of it."

Sadly, I even heard myself repeating that same phrase yesterday while I was Christmas shopping. I was at my favorite bookstore when a customer bought three books and asked to have them gift-wrapped. Always anxious to see what titles are hot, I moseyed over to the front counter and saw the clerk wrapping a book called SCARED OF SANTA : SCENES OF TERROR IN TOYLAND by Denise Joyce and Nancy Watkins. 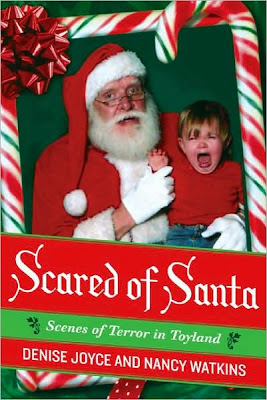 According to the back of this paperback volume: Nothing says Christmas quite like innocent children shrieking with terror as a stranger dressed in red drags them kicking and screaming onto his lap. Now this time-honored rite of passage is celebrated with a hilarious collection of more than two hundred and fifty priceless photos of kids' traumatic trips to Santa's workshop. Scared of Santa offers a cornucopia of photographic funnies—from sixty-year-old family heirlooms to last year's howlers—along with delightful commentary on those unforgettable childhood visits to scary ol' Saint Nick. Paging through this imminently-browsable volume and, to borrow a line from a Christmas song, laughing all the way, I said to the bookstore clerk: "What a simple idea! Anyone could have thought of it. I mean, everyone has pictures just like this in their photo album. Don't you?" "No," she replied, "I was raised a Jehovah's Witness." Oops. I turned to a nearby customer to get some support, but noticed he was wearing a yarmulke. Okay, not everyone has a scared-of-Santa picture in their album. But my family does. 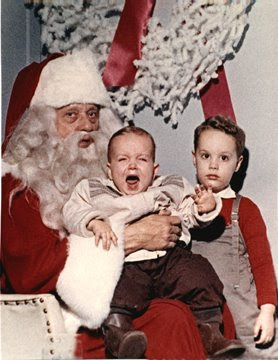 And how many times have I looked at this photo, never once thinking it was a BOOK just waiting to be written? A book which customers are now buying in multiple copies and having gift-wrapped. A book that's currently in Amazon.com's top 1000 bestselling titles. A book that people are going to find in their stockings this Christmas morning and will no doubt take down from the shelf every holiday season from now on to enjoy. Denise Joyce and Nancy Watkins seized on an iconic holiday image shared by so many families and are now offering over two hundred variations of it in a little holiday book that will make readers laugh and sigh and remember. What a simple idea. Why didn't I think of it?

...Incidentally, I'd also like to add that in the picture from my family album, I am NOT the brother who is crying. Instead, I'm the one who grew up to say, "Why didn't I think of that?" and, oh brother, that makes me feel like crying now!
Posted by Peter D. Sieruta at 10:51 AM

Oh. My. God. That photo is hysterical. Santa looks so haggard and/or hungover, and what's with the giant boil under his eye?

Really cute idea lol. My mom might like this since she doesn't have any scared of Santa photos of my little brother and me.

I agree with Lisa, that Santa is kind of scary!!!