Earlier this week I wrote about the possibility that "author reference books" could soon be obsolete. What's the point of going to the library and looking up an entry in SOMETHING ABOUT THE AUTHOR, THE JUNIOR BOOK OF AUTHORS, or CONTEMPORARY AUTHORS when you can just sit down at your computer and immediately access a writer's personal website or blog and find out more than you ever wanted to know?

The internet has clearly broken down many of the boundaries between writer and reader. Nowadays you can visit an author's website and find a complete list of his or her publications along with plot summaries and quotes from reviews. You can go to the author's blog and learn what he or she ate for breakfast and whether they're supporting Obama or McCain for president. Need more information? Just send an e-mail and you might get a personal response from the author within a few minutes. There are obviously MANY benefits to today's technological advances. And, having worked in libraries all my life, I'm all about providing as much info as possible to inquisitive minds.

However, I think there are also advantages to authors remaining a bit aloof and shrouded in mystery.

I discovered this over twenty years ago when Bruce Brooks made his stunning debut in young-adult fiction with THE MOVES MAKE THE MAN, a haunting and exhilarating novel exploring the friendship of two boys -- one black, one white -- played out on a basketball court hidden deep in the North Carolina woods. Whattabook! One of the highlights of the novel is its honest, colorful, and pitch-perfect narration by the thirteen-year-old African-American protagonist Jerome Foxworthy. THE MOVES MAKE THE MAN won the Boston Globe-Horn Book Award for fiction and got a Newbery Honor. Bruce Brooks was hailed as an exciting new African American author. 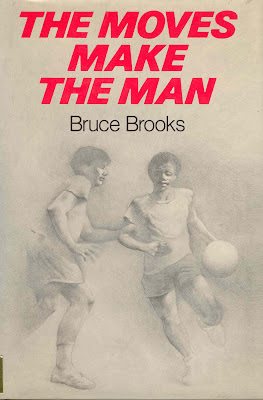 Two years later, Mr. Brooks published his second young-adult novel, the excellent MIDNIGHT HOUR ENCORES. I can still remember how excited I was to see this novel on the bookstore shelf. I picked it up and read the front flap. Then I flipped to the back flap and saw a picture of the author for the first time. "Oh my gosh," I said in shock. "He's white!"

It had never crossed my mind that the author of THE MOVES MAKE THE MAN could be anything other than African American. It was a smart move for the publisher to include no author picture on the jacket of MOVES or in the publicity materials for the book. It made us accept the novel on its own terms. I wasn't the only one fooled by the authenticity of Jerome's voice. In 500 GREAT BOOKS FOR TEENS, Anita Silvey writes, "Jerome so enters the imagination of readers that sometimes young fans of the book, attending signings by the author, have been disappointed to learn that Bruce Brooks is not a black basketball dude."

Needless to say, that whole experience taught me a lesson about "pigeonholing" authors based on their race, sex, or background. It reminded me that books need to be judged on their own merits, not on what we know about the author.

Every year the Coretta Scott King Awards are presented to children's books that "portray some aspect of the African American experience, past, present, or future." This award was originally conceived in 1969 by librarians Glyndon Flynt Greer and Mabel McKissick and publisher John Carroll during a discussion noting that no African American author or illustrator had, at that point, won the Newbery or Caldecott Awards. Since 2004 the Coretta Scott King Task Force has been part of the American Library Association's Ethnic and Multicultural Information Exchange Round Table. The awards (there are prizes for authors and illustrators, as well as the John Steptoe Award for New Talent) are announced each January and presented at a gala breakfast during ALA's summer convention.

Though the CSK committee is multi-ethnic, one of the award's criteria is that the honored books "must be written/illustrated by a African American." One of the Honor Books for 1979 was THE SKATES OF UNCLE RICHARD by Carol Fenner. 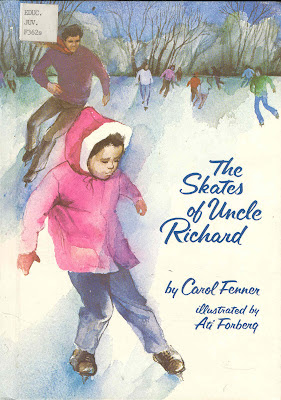 I don't know if the criteria for the award were different in 1979, or if it was a case of nobody bothering to check, but Carol Fenner was actually caucasian. Oops. But it does bring up an interesting question. Was Ms. Fenner's story of a budding African-American figure skater any less worthy of the honor because the author was white?

A few years later, Carol Fenner wrote another book with an African American protagonist, YOLONDA'S GENIUS. The novel wasn't recognized by the CSK committee, but it did get a Newbery Honor. I don't recall this title appearing on any Newbery shortlists or getting much discussion before the announcement, but it's the kind of book that, once chosen, suddenly seems exactly RIGHT for the award -- smart, solid, emotionally-involving, and with strong characters and plotting -- and makes you wonder why you hadn't considered it before. 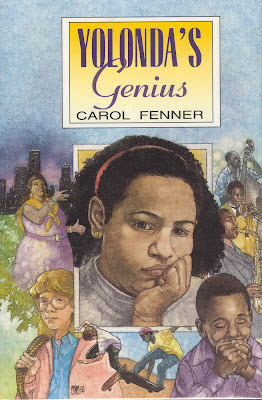 A dozen years ago, Carol Fenner gave a speech about YOLONDA'S GENIUS at the library across the street from where I work, so I took a late lunch and went over to hear her speak. She sat quietly on the stage as the audience of mostly African American students filed in. These kids, many of whom had read the book, kept exclaiming in surprise, "Hey, she's a white lady!"

Ms. Fenner immediately grabbed the attention of the audience by reading from her notebook some of the things she had heard the kids say when they entered the auditorium that afternoon. She didn't repeat the "Hey, she's a white lady!" remark, but read aloud other comments she'd overheard, emphasizing the poetry in everyday language, as well as the intrigue that could be found in a simple sentence -- phrases that had gotten her thinking and that she might someday develop into stories. She then began discussing her novel -- describing how she enjoyed attending Chicago's jazz and blues festival and how seeing a girl and her brother standing on stage made her create the characters of Yolonda and Andrew.

The story was compelling and the kids in the audience quickly became caught up in it. In fact, after a while I don't think any of them cared about the author's ethnicity at all; they just wanted to know more about YOLONDA'S GENIUS and talk about their own reactions to THE BOOK. Ultimately, the book was all that mattered. 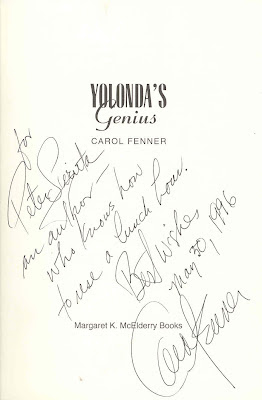 It was one of my best-spent lunch hours.
Posted by Peter D. Sieruta at 11:06 AM

This was a great post. I, too, have always made the assumption that a protagonist's skin color matches the author's. What a narrow-minded way to think. Very eye-opening-- and sorely needed. Thanks!


Beth Fehlbaum, author
Courage in Patience, a story of hope for those who have endured abuse
http://courageinpatience.blogspot.com
http://www.kunati.com/blog-beth-fehlbaum
Chapter 1 is online!

I just have a question--I am looking for a book I read as a kid in the early 1970's. It was about an African American boy who wants a quiet place, and ends up finding the library. It had beautiful, soft illustrations in pencil or charcoal. I keep thinking it was called "a quiet place" or "the quiet place," but i can't find that anywhere. Does this sound familiar to you, or any of your readers?

Thanks for any help

The book you are seeking IS called A QUIET PLACE. It was written by Rose Blue and illustrated by the African American artist Tom Feelings. It was published by Franklin Watts in 1969. If your library doesn't have it, ask them to interloan a copy for you. There are also copies available for purchase at www.abebooks.com.

Thanks for visiting Collecting Children's Books!

THANK YOU!!!!! Thank you so much! I looked under John Steptoe, and then, one night, I finally associated the name Tom with it, but that's as far as I could go! I am now off to find a copy. I know my kids will love it. Thanks for taking the time to answer my question, and congrats on such a fascinating blog!