Mary-Kate Olsen is off the hook.

The feds have closed their probe into Heath Ledger's death and won't force the TV twin to tell them what she knows about his prescription drug stash, a source told the Daily News.

Prosecutors had kept an April 23 subpoena up their sleeves as they tried to convince Olsen to voluntarily speak with federal drug agents still probing Ledger's January overdose, the source said.

Olsen had refused to talk without immunity to the Drug Enforcement Administration agents and federal prosecutors looking into the actor's death in his SoHo flat.

By closing the case, Olsen won't have to.

"A decision was made to close the case," said a source familiar with the inquiry.

The U.S. Attorney of the Southern District decided not to serve Olsen with a subpoena, the source said. 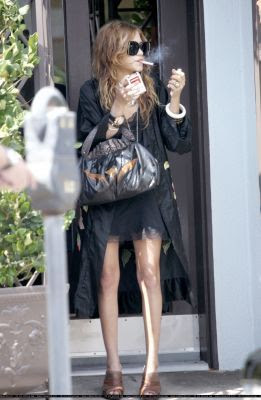 October 28 will mark the publication of INFLUENCE by Mary-Kate and Ashley Olsen. The heretofore-respectable publisher Razorbill issued a press release describing the volume:

"INFLUENCE introduces readers to respected artists, seasoned designers and others who have influenced Mary-Kate Olsen and Ashley Olsen over the past decade. The book will feature influential figures including Christian Louboutin, Lauren Hutton, Bob Colacello, Terry Richardson, Jack Pierson and Robert Lee Morris. A coffee table book, INFLUENCE includes exclusive photographs of Ashley and Mary-Kate from world renowned photographer Rankin, and a wide variety of other never-before-seen materials and interviews from Mary-Kate and Ashley's personal collections." 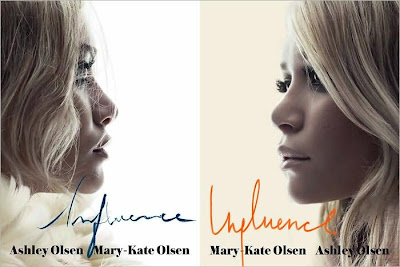 Last night I attended a pre-publication party for INFLUENCE, which was held at one of New York's swankiest nightspots. It was the first time I'd been to an author event scheduled for 2:00 AM -- certainly an odd hour to promote a children's book! After dodging a throng of paparazzi with flashing cameras, I had to withstand inspection from a doorman who was only allowing entrance to the "beautiful people."

Fortunately, I had a press pass.

Inside, I secured a seat in the same aisle as Paris Hilton, Britney Spears, and Lindsay Lohan, all of whom revealed that they, too, are aspiring CHILDREN'S BOOK AUTHORS.

The fashionably-late Olsen Twins tottered in shortly after 4:00 AM (coincidentally, New York City's bar-closing time) and, after being seated at the dais (Mary-Kate on a booster seat, Ashley on two telephone books) and getting settled with cigarettes and trashcan-sized cups of Starbucks coffee, the tabloid twosome proceeded to take questions from the audience.

Soon the sun was starting to rise, so we all got in line to have our books signed. Here's mine: 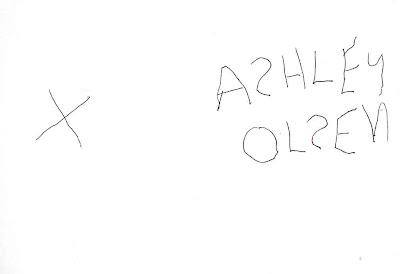 (Mary-Kate's signature on the left, Ashley's on the right.)

I haven't read the book yet (I've heard the Olsens haven't read it yet either) but I predict a great future for these newly-minted CHILDREN'S BOOK AUTHORS! After all, it's not every day that an esteemed publisher such as Razorbill does a 250,000 first-printing for a book by first-time authors.

They truly represent THE FUTURE OF CHILDREN'S BOOKS!
Posted by Peter D. Sieruta at 10:29 AM